Video: Build a Prototype Game in Unity in 40 Minutes. It seems like a question that pops up on a near-daily basis on our forums is "How do I get started to make my own game? 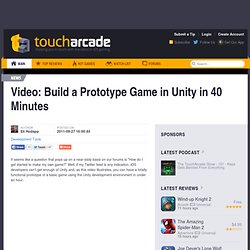 " Well, if my Twitter feed is any indication, iOS developers can't get enough of Unity and, as this video illustrates, you can have a totally functional prototype of a basic game using the Unity development environment in under an hour: What's even cooler, is that all the tools shown in the video are totally free to download, and there's even a fully-functional 30 day trial of the "pro" licenses. You don't even need to know how to build 3D models, as the Unity Asset Store has tons available, both for free and for reasonably cheap licensing fees. If game development is something you're interested in, but don't really know where to start, give this video a watch. 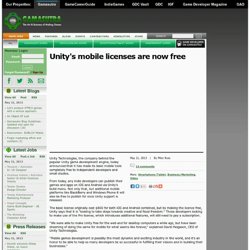 From today, any indie developers can publish their games and apps on iOS and Android via Unity's build menu. Not only that, but additional mobile platforms like BlackBerry and Windows Phone 8 will also be free to publish for once Unity support is released. The basic license originally cost $800 for both iOS and Android combined, but by making the licence free, Unity says that it is "looking to take steps towards creative and fiscal freedom. " Those developers looking to make use of the Pro license, which introduces additional features, will still need to pay a subscription. "We were able to make Unity free for the web and for desktop computers a while ago, but have been dreaming of doing the same for mobile for what seems like forever," explained David Helgason, CEO of Unity Technologies. 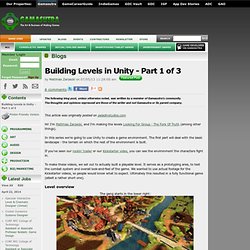 The thoughts and opinions expressed are those of the writer and not Gamasutra or its parent company. This article was originally posted on paladinstudios.com Hi! I'm Matthias Zarzecki, and I'm making the levels Looking For Group - The Fork Of Truth (among other things). In this series we're going to use Unity to create a game environment. If you've seen our rockin' trailer or our Kickstarter video, you can see the environment the characters fight in.

To make these videos, we set out to actually built a playable level. Level overview The gang starts in the lower right: They break into a village and get in the way of a goblin attack: Then they get a quest from a farmer (actually a goblin in disguise), and track down the goblin menace. The level takes about 10-20 minutes to play through, and is quite fun.

Terrain The entire level uses the Unity Terrain. Roads are easy to create. Verticality. 4 Ways To Increase Performance of your Unity Game. September 6, 2016: We are looking for a Unity C# Developer and Node.js/Back-end Developer to join our team. 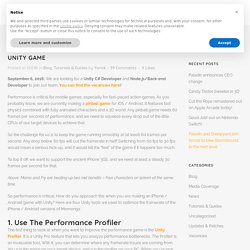 You can find the vacancies here! Performance is critical for mobile games, especially for fast-paced action games. As you probably know, we are currently making a pinball game for iOS / Android. It features fast physics combined with fully animated characters and a 3D world. Any pinball game needs 60 frames per seconds of performance, and we need to squeeze every drop out of the little CPUs of our target devices to achieve that. So the challenge for us is to keep the game running smoothly at (at least) 60 frames per second. To top it off, we want to support the ancient iPhone 3GS, and we need at least a steady 30 frames per second for that. Is it stupidity to use unity terrain in mobile projects?? risks..etc. T4MBE Download. Terrain 4 Mobile System. Learn Modules.