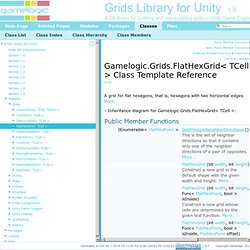 More... A grid for flat hexagons, that is, hexagons with two horizontal edges. Version 1.0: Added Construct a new grid in the default shape with the given width and height. No transformations are applied to the grid. Normally, the static factory methods or shape building methods should be used to create grids. See Constructing Grids Construct a new grid whose cells are determined by the given test function. The test function should only return true for points within the bounds of the default shape.

The function should only return true for points within the bounds of the rectangle when the given transforms are applied to them. Returns a grid in the same shape, but with contents in the new type. Creates the grid in a shape that spans the entire storage rectangle of the given width and height. Bottom corner is the origin. Gamelogic Extensions. Polycount. Geodesic globe WIP. Right now, that shot is just random noise; ie: a random height applied to each hex-center vertex, and then a version of the terrain fractal subdivider routine from the flat map is run on that low-res mesh. 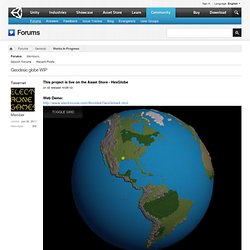 It really wasn't anything I intended to publish; but when I saw it, I knew it was something you guys who were following the thread would want to see, so I took a screenie I am working on making the map data image like the flat map. This is a map that I pulled off the net, with a grid overlaid, followed by the working map data file that I traced from that. (I drew in the terrain only based on height, since this map was just a topographic relief map, some areas are mountains on my map that are merely high elevation in the real world. PATileTerrain. Nickbreslin/Griddy. Planetary Terrain v2. TODO List (from code) Excel Reader. Tetra Unitis. Playmaker. NGUI: Next-Gen UI. Orthello 2D Framework. World Builder. Localization package. HexTech. City Builder Starter Kit. Unity Samples : 2D Pack. Tower Defense Kit. Requires Unity 4.0.1 or higher. 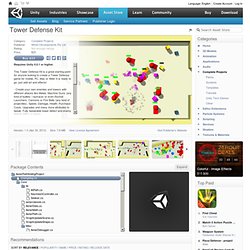 This Tower Defense Kit is a great starting point for anyone looking to create a Tower Defense game for mobile, PC, Mac or Web! It is ready to go, just add art and effects! - Create your own enemies and towers with different attacks like Melee, Machine Guns (any kind of bullets / raytrace) or even Rocket Launchers, Cannons or Fire Balls (any kind of projectiles). Speed, Damage, Health, Purchase Costs, Upgrades and many more attributes to tweak. StarTrooper. Procedural Examples. Game Concept Starter Pack / Low Poly. Requires Unity 4.3.4 or higher. 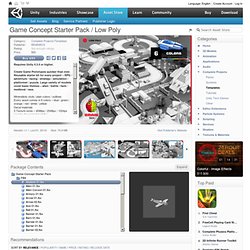 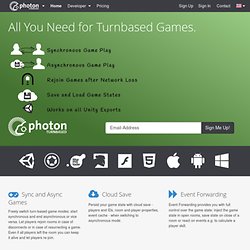 Let players rejoin rooms in case of disconnects or in case of resurrecting a game. Even if all players left the room you can keep it alive and let players re-join. Cloud Save Persist your game state with cloud save - players and IDs, room and player properties, event cache - when switching to asynchronous mode. Event Forwarding. New Tool: TileEditor. While a simple extension, TileEditor makes a great addition to the rapid-prototyper’s tool belt, making it easy for you to draft out levels, dungeons, and mazes for your games. 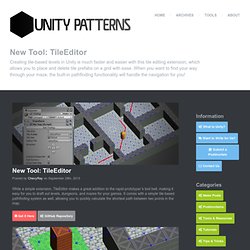 It comes with a simple tile-based pathfinding system as well, allowing you to quickly calculate the shortest path between two points in the map. Infinite Map Builder. Requires Unity 3.5.4 or higher. 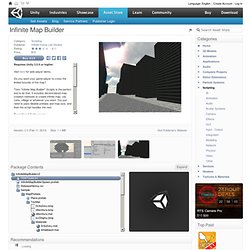 Visit here for web player demo. Do you want your game player to cross the limited bounds of the map? Then "Infinite Map Builder" Scripts is the perfect tool to do that. It includes decentralized map creation methods to create infinite map, city, ruins, village or whatever you want. You just need to pass tileable prefabs and map size, and then the script handles the rest. 2D Map Factory. UniTile. ProTile Map Editor. Terrain FoW. Tiles of War. Dynamic Map System. Requires Unity 4.1.2 or higher. 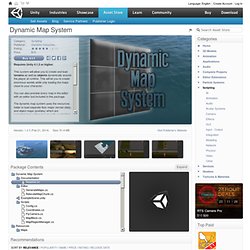 This system will allow you to create and load terrains as well as objects dynamically around the player at runtime. This will let you to create enormous worlds while only loading the maps close to your character. You can also preview every map in the editor with an editor tool included in this package. The dynamic map system uses the resources folder to load separate floor maps (terrain data), and object maps (prefabs) which are instantiated at runtime based on the controller's position (Usually main camera/character). 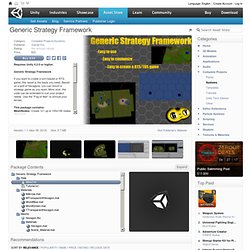 Generic Strategy Framework If you want to create a turn-based or RTS game, this asset is the basis you need. Based on a grid of hexagons, you can mount a strategy game as you want. More over, the code can be extended to suit your project needs. Tile Based Map and Nav. Waypoint Guide. Turn Based Battle System. HexTech. HexGlobe. Navigation And Pathfinding System. InfinityXTile Engine. StrategyCam. Tile Builder.