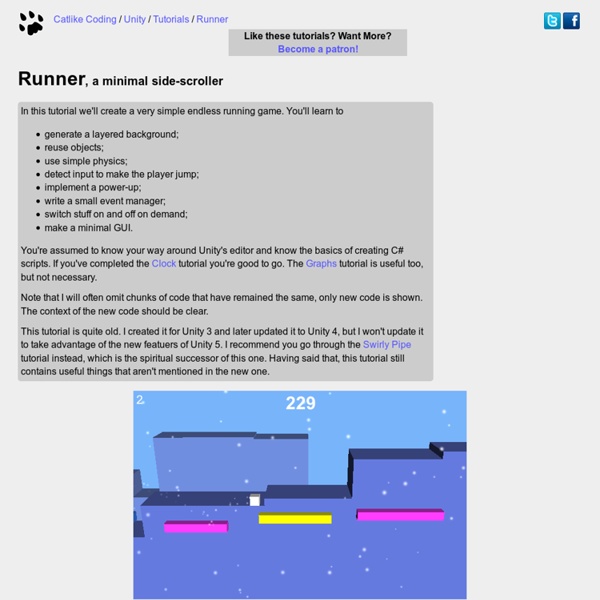 In this tutorial we'll create a very simple endless running game. You'll learn to generate a layered background; reuse objects; use simple physics; detect input to make the player jump; implement a power-up; write a small event manager; switch stuff on and off on demand; make a minimal GUI. You're assumed to know your way around Unity's editor and know the basics of creating C# scripts. If you've completed the Clock tutorial you're good to go. The Graphs tutorial is useful too, but not necessary. Note that I will often omit chunks of code that have remained the same, only new code is shown. This tutorial is quite old. Game Design Before we get started, we should make some decisions about what we put in the game. For gameplay, we'll have a runner who dashes towards the right of the screen. For graphics, we'll simply use cubes and standard particle systems. There won't be any sound or music. Setting the Scene Open a new project without any packages. Running Generating a Skyline This works!

Lets Make a Game: Infinite Runner Scripting Beginner Checked with version: 4.3 Let's Make a Game (LMG). Unity Game Starter Kit for Windows Store and Windows Phone Store games I have created a simple game that you can download, play with and submit to the store – both to Windows Store and Windows Phone Store – reching millions of users world wide. It contains the basic functionality of a 2d sidescrolling shooter game. This game starts simple, then after level 3 – more enemies will come, and after level 4 there is a possibility that a harder enemy that takes two shots to kill will spawn. The game supports input of touch, mouse, keyboard and the xbox controller (just connect it to a surce or a computer and play!). This game is pretty simple, but with your modifications to it, it can be a totally new game with much more content. Open the game in Windows Store (is soon published)Open the game in Windows Phone Store

Unity - Understanding Vector Arithmetic Vector arithmetic is fundamental to 3D graphics, physics and animation and it is useful to understand it in depth to get the most out of Unity. Below are descriptions of the main operations and some suggestions about the many things they can be used for. Addition 3D Infinite Runner Game Tutorial - Unity3D (C#) 3D Infinite Runner Game – Unity3D (C#) Play Demo We have 2 choice to move character in an infinite runner game: move character or move ground. First one, you can move ground continuously in a negative direction to character and move right or left your character. I will explain the second one in this tutorial that a stable ground and a moving character. For a brief description, we will create a plane as road, we will create some spheres to create coins and to make character move(it will follow the stable spheres and we will get a moving action) with Lerp method.

Alex Rose's Blog - Animation in 2D Unity Games: In-Depth Starter Guide The following blog post, unless otherwise noted, was written by a member of Gamasutra’s community. The thoughts and opinions expressed are those of the writer and not Gamasutra or its parent company. So, Unity recently announced extra 2D game support, with the addition of Box 2D physics and a sprite manager. But there’s a few tricks you still need to keep in mind.

Angry Birds Clone in Unity 3D (source code included) - Scenes From A Developer Memory Please check the new and updated blog at blog post can be found at Last time I posted something around Angry Birds was 3 years ago, when I blogged about a 5’ creation of Angry Birds with 0 lines of code using XAML, Behaviors and Expression Blend. Well, it wasn’t exactly a clone, but it simulated on how to implement some basic dragging/collision/particles functionality with the Farseer Physics Engine. Infinite Runner Starter Pack Pro - Asset Store Requires Unity 4.3.0 or higher. Infinite Runner Starter Pack Pro is a feature complete toolkit for any game within the endless runner genre. It is designed to easily incorporate your own look just by swapping out prefabs.

Unity3D Oculus Rift Plugin setup It is very easy to setup the Oculus Rift Unity 3D Plugin. I’ve done it on my Mac and recorded the process of putting it into a game. It’s very easy to do and I just used the resource sharing centre to borrow assets from other people. Introduction to Unity’s New 2D Workflow - @jessefreeman For the past week I have been working with Unity 4.3’s new 2D tools which were announced last week. Unity has been on my list of game frameworks to try out for years now but the thought of doing 3D games didn’t really appeal to me and trying to force it to do 2D didn’t sound like much fun either. But now with the addition of a completely new and well integrated 2D workflow I immediately jumped in and started picking it up.