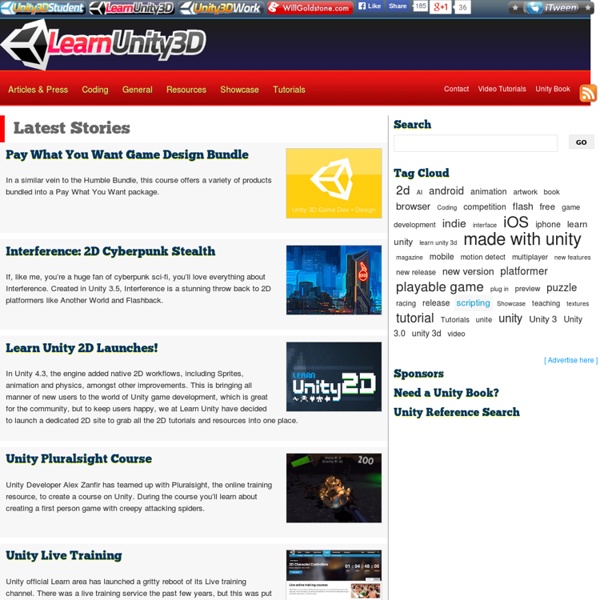 SkillSwap: Making A 2 Player 2D Game With Unity | Rocket 5 Studios [UPDATE] We have a brand new Unity tutorial which uses the new built-in 2D sprite and physics systems that Unity added in version 4.3. You can find it here. I recently presented a step-by-step workshop titled “Making A 2D Sprite-Based Game With Unity” to the Toronto SkillSwap community which is “A collaborative group for folks interested in sharing their skills and training with other developers in Toronto, and for folks interested in learning!”. Around 50 people showed up to the 3 hour workshop and although we tried our hardest to get through all of the content, we only completed about 1/2 of the project before it was time to move on to the beer drinking portion of the event. So while I still had all of the project steps fresh in my mind, I figured it would be a good idea to go through the workshop at home and screencast the whole thing so that everyone could get a chance to follow along with the complete tutorial. And here’s the screencast: Calculating Orthographic Camera Size

How to create an online multiplayer game with Unity - Paladin Studios C# Code creating a server Csharp GUI guide how to how to create a multiplayer game interpolate interpolating Interpolation joining a server kickstarter lfg LFG & the fork of truth multi multi player Multiplayer multiplayer game Multiplayer tutorial network network communication network manager object creation online player player-script predict Predicting Prediction Project refresh host Remote Procedure Call Remote Procedure Calls RPC RPCMode Script Server Spawning a player synchronize The fork of Truth tutorial Tutorial Project Unity Unity editor Unity Guide This tutorial will explain how multiplayer can be implemented using Unity’s networking functionality. We didn’t work on an online multiplayer game before, and here will we describe how we designed the implementation for LFG: The Fork of Truth. This is a four person co-op game where each player controls one of the characters from the LFG comic. These are the things we are going to talk about: Creating a server So let’s get started!

50 Tips for Working with Unity (Best Practices) About these tips (Edit: August 2016. I have revised these tips. You can find the new list here.) These tips are not all applicable to every project. They are based on my experience with projects with small teams from 3 to 20 people.There’s is a price for structure, re-usability, clarity, and so on — team size and project size determine whether that price should be paid.Many tips are a matter of taste (there may be rivalling but equally good techniques for any tip listed here).Some tips may fly in the face of conventional Unity development. Process 1. 2. 3. 4. It makes it unnecessary to re-setup each scene.It makes loading much faster (if most objects are shared between scenes).It makes it easier to merge scenes (even with Unity’s new text-based scenes there is so much data in there that merging is often impractical in any case).It makes it easier to keep track of data across levels. You can still use Unity as a level editor (although you need not). 5. Scene Organisation 6. 7. 8. 9. 10. Art

John Warner's Blog - The top 5 things I've learned as a Unity developer The following blog post, unless otherwise noted, was written by a member of Gamasutra’s community. The thoughts and opinions expressed are those of the writer and not Gamasutra or its parent company. Unity is a fantastic game development platform for many reasons, one of which being the clean, accessible way its component-oriented platform is designed. For example, it's very easy to slam together some code and have a simple working prototype running in a day or two. Despite its versatility however, I've found over the years that there's a few practices that work particularly well with Unity. With my new game, The Fall, I've taken many of these practices and combined them. If you get some value out of this article, please check out The Fall on Kickstarter! 1: Think of your code as a long term company assetA great programmer once told me that when you write code, you should consider not just its value as an asset to the project you're working on, but as an asset to your business. 4. 5.

4 Ways To Increase Performance of your Unity Game September 6, 2016: We are looking for a Unity C# Developer and Node.js/Back-end Developer to join our team. You can find the vacancies here! Performance is critical for mobile games, especially for fast-paced action games. So the challenge for us is to keep the game running smoothly at (at least) 60 frames per second. To top it off, we want to support the ancient iPhone 3GS, and we need at least a steady 30 frames per second for that. Above: Momo and Fry are beating up two owl bandits – Four characters on screen at the same time. So performance is critical. The first thing to look at when you want to improve the performance game is the Unity Profiler. The good part about this is that even when profiling an iPhone or iPad, you can run the Profiler from a windows machine. To use the Profiler on your mobile devices, simply build the game in Developer mode. To be able to connect to a player, the player must be launched with the Development Build checkbox found in the Build Settings dialog.

Wendelin Reich's Blog - C# Memory Management for Unity Developers (part 1 of 3) The following blog post, unless otherwise noted, was written by a member of Gamasutra’s community. The thoughts and opinions expressed are those of the writer and not Gamasutra or its parent company. [Note: This post presupposes 'intermediate' knowledge of C# and Unity.] I'm going to start this post with a confession. Although raised as a C/C++ developer, for a long time I was a secret fan of Microsoft's C# language and the .NET framework. About three years ago, when I decided to leave the Wild West of C/C++-based graphics libraries and enter the civilized world of modern game engines, Unity stood out with one feature that made it an obvious choice for myself. Don't show this to your players. If you have even the most casual acquaintance with Unity and/or game programming, you know how wrong I was. This first post discusses the fundamentals of memory management in the garbage-collected world of .NET and Mono. This latter task is called garbage collection (GC). Coroutines Strings Boxing

Getting Started In Unity – A Rookie’s Guide - Whiskeybarrel Studios Like many of my game development peers, I come from a Flash background. Over ten years of experience, in fact. In hindsight, I think it’s actually far too long to be using the one development tool exclusively – especially when the rug is pulled out from under you by a self-serving prat. The good news is that if you find yourself in a situation like my own, all is not lost. As I’ve talked about several times this year, I’ve thrown myself into learning Unity, and by association, C#. I’d like to share some thoughts, observations and provide links to some helpful tutorials that might prove of use to you. The first thing I’d suggest to anyone just getting started with Unity? Once you’ve downloaded the beta and got it installed, you should watch the series of Unity videos dealing with the Editor. It’s worth familiarising yourself with the basic keyboard shortcuts for the editor because this will save you a lot of time down the track. Some little things you might want to master first:

Otaku No Zoku» Blog Archive » Unity3D Piracy Prevention A Unity3D script to prevent your precious web game from being pinched from authorised websites and just hosted somewhere else. This sort of very simple protection is especially important if you are trying to monetize your web game and do not want it spread around on websites where you don’t see any financial compensation. If you host on Wooglie.com or Shockwave.com, I highly recommend you at least drop this script in to your project. It’s one more line of defence against random people just swiping your game and hosting it on their own advertising supported website. How to use: Copy and paste this code in to a new C# script named AntiPiracy.cs and then attach the script to one of your game objects, such as the player, or the main menu. You only need to use it once, and it only needs to execute once. You specify the list of permitted remote hosts in the Unity3D Inspector. You can specify whether to permit running on local host with a simple check box. The License: It’s the GNU Lesser GPL.