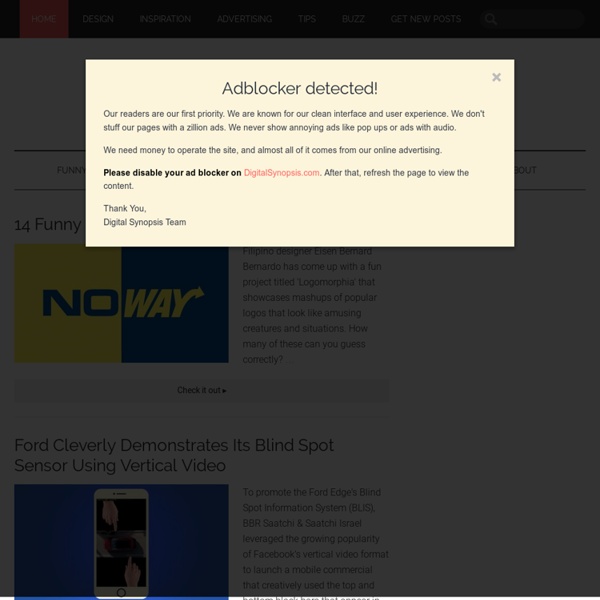 2010 Census: Children less than five years old in Chicagoland By Chris Groskopf and Brian Boyer Aug. 7, 2011 This map shows the distribution of children less than five years old in Cook, Lake, Kane, McHenry, Kankakee, Kendall and DuPage counties as reported by the 2010 U.S. Census. Each dot represents a single child Read the story:New U.S. census numbers herald a greater Latino presence in the Chicago area Move your mouse over the map for details. *What do these numbers mean? This map shows one dot for each child less than five years old as reported in the 2010 U.S. 23 glorious geometric patterns in design Lately, we've noticed a lot of designers using geometric patterns, shapes and styles in their logo designs, vector art and more. Using these shapes, the designs become a simple yet wholly striking work of art channelling influences from the design era of art deco. Subscription offer We've rounded up our favourite examples of geometric patterns and designs featuring geometric shapes. 01. Bringing a city together through branding is no easy task, especially when the city in question is a diverse as Melbourne, Australia. Thanks to a clever geometric design, the chunky 'M' logo is flexible enough to reflect the different aspects and personalities of the city. 02. Australian designer, printer and podcaster Olivia King created this beautiful collection of concept packaging, which is suitably called Trigonometry. Thanks to its uniform look and feel, this gorgeous design really elevates the value of the products and packaging. 03. 04. 05. 06. 07. 08. Operating out of her studio in St. 09. 10.

NewsBios | Home of the World's Most Influential Journalists نتيجة بحث Google عن الصور حول ‪ البحث بحسب الصور الصور ذات الصلة: قد تكون الصور محمية بموجب حقوق النشر.إرسال تعليقات www.creativebloq.com535 × 535البحث بحسب الصور 11. الصور ذات الصلة: Dialysis Facility Tracker By Robin Fields, Al Shaw, and Jennifer LaFleur, ProPublica, Updated October 4, 2013 This site is for dialysis patients and others who want to learn about the quality of care at individual dialysis clinics. Among other things, you can learn how often patients treated at a facility have been hospitalized, report certain types of infections or are placed on the transplant list. The information is submitted by facilities and collected by contractors of the Centers for Medicare and Medicaid Services, the federal agency that oversees most dialysis care. Related story: Dialysis Data, Once Confidential, Shines Light on Clinic Disparities »

AdAge Top 15 Campaigns of the 21st Century Many ad campaigns over the years have sold soap. Fewer have tried to change societal notions about beauty. Even fewer have tried to do both. The campaign that had its origins in London and Canada with a billboard asking motorists to vote on whether the women pictured were “fat or fit?” Dove’s “Campaign for Real Beauty” is the only campaign cited by every one of the Advertising Age judges as belonging on this list, and one that was described by the panel as groundbreaking, brave, bold, insightful, transparent and authentic. Last century, Listerine made it on to the list of Advertising Age’s “Top 100 Ad Campaigns of the 20th Century” with its “Always a Bridesmaid, Never a Bride” campaign, an approach tailored and imitated often throughout the century to feed on women’s insecurities and remind them they needed to improve their attractiveness. At the very least, the 10-year-old campaign changed the conversation in advertising and beyond. Did Dove play a role in those numbers? Ms. Ms.

Look At This : NPR I’m Wes Lindamood, an interaction designer on the NPR Visuals team. I’ll be joining you here on Look At This from time to time to explore design, technology and (I hope) some interesting stories about how we see the world. Today’s rabbit hole: Faces in things. "Ooh - I think I hear the recycling truck!"— @FacesPics A funny photo showed up in my Twitter feed a few weeks ago, and it was the most delightful thing I saw all day. This reminded me of the work of Seoul-based art collective Shinseungback Kimyonghun. In Cloud Face, they point their cameras to the sky to do some cloud watching. Thanks to Mozilla developer Heather Arthur, facial recognition also exists for cats. that these humans look like cats … and that these cats look like humans: (Photos via Shinseungback Kimyonghun) While I don’t find the results of their project particularly compelling, I am fascinated by these false positives, and the unique perspective of algorithmic vision. Where’s the cat in this photo?

interactive - National Film Board of Canada At the NFB we like change. For 70 years we've experimented, innovated, and produced a legacy of technical and creative firsts in cinema, animation, and documentary. Think McLaren, Lipsett, Brittain, and Jutra; Stereoscopic 3d, VTR, and participatory media. Today, the way we create, consume, and connect with each other changes by the minute. And this evolving collection of stories reflects that reality. It's the result of artists and storytellers of all sorts utilizing new technology, to explore new forms of creation, for a new kind of Canada. The stories they're telling here are new, but share a lot in common with the work that came before: they present distinct voices, strong points-of-view, and unique perspectives. So let the conversation begin. Scary or otherwise.

The 25 Winners of the Print Celebrates Design Competition Justin Ahrens challenges common ideas of what design success is and discusses how it is achieved by other means. This eye-opening video will broaden design’s potential for self-gratification and improving the world. Designers are makers—all day, every day. And here at Print magazine, we like to celebrate the designs you create that commemorate an occasion, be it a holiday or special event. Randy J. When asked about the driving force behind his impressive career, Hunt notes, “I do feel like I’ve been on a constant quest of self-improvement. Take a look below at all the winners Hunt selected. Firm: It’s a Go Communication Creative Team: Nelri Rossum, Liam McAlpine, Kurt Linaker, Glenda Venn, Venessa Govender Client: It’s a Go Communications Description: To celebrate 15 years of rewarding projects and experiences, we sent each of our clients and delivery partners a set of 15 chocolate slabs. Comments from judge Randy J. Firm: Rural Rooster Creative Team: J.J.