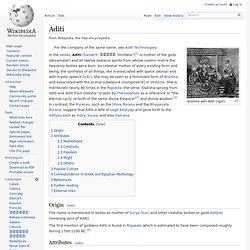 In the Vedas, Aditi (Sanskrit: अदिति "limitless")[1] is mother of the gods (devamatar) and all twelve zodiacal spirits from whose cosmic matrix the heavenly bodies were born. As celestial mother of every existing form and being, the synthesis of all things, she is associated with space (akasa) and with mystic speech (Vāc). She may be seen as a feminized form of Brahma and associated with the primal substance (mulaprakriti) in Vedanta. Dyaus Pita. Dyauṣ Pitrā (Dyauṣpitṛ द्यौष्पितृ), literally "Sky Father" is the ancient sky god of Vedic pantheon, husband of Prithivi and father of Ushas (Dawn), Ratri (night) and the chief deities. 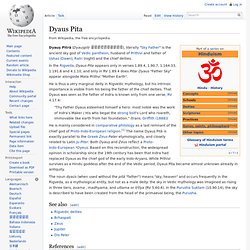 In the Rigveda, Dyaus Pita appears only in verses 1.89.4, 1.90.7, 1.164.33, 1.191.6 and 4.1.10, and only in RV 1.89.4 does Pitar Dyaus "Father Sky" appear alongside Mata Prithvi "Mother Earth". He is thus a very marginal deity in Rigvedic mythology, but his intrinsic importance is visible from his being the father of the chief deities. That Dyaus was seen as the father of Indra is known only from one verse, RV 4.17.4: "Thy Father Dyaus esteemed himself a hero: most noble was the work of Indra's Maker / His who begat the strong bolt's Lord who roareth, immovable like earth from her foundation. " (trans. See also[edit] References[edit] Indra. Origins[edit] Aspects of Indra as a deity are cognate to other Indo-European gods; they are either thunder gods such as Thor, Perun, and Zeus, or gods of intoxicating drinks such as Dionysus. 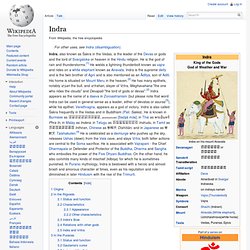 The name of Indra (Indara) is also mentioned among the gods of the Mitanni, a Hurrian-speaking people who ruled northern Syria from ca.1500BC-1300BC.[5] Vedic Indra corresponds to Verethragna of the Zoroastrian Avesta as the noun verethragna- corresponds to Vedic vrtrahan-, which is predominantly an epithet of Indra. The word vrtra-/verethra- means "obstacle". Izanagi. Izanagi (イザナギ? 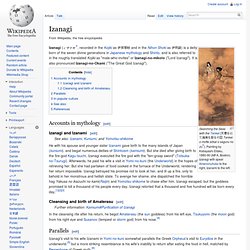 , recorded in the Kojiki as 伊邪那岐 and in the Nihon Shoki as 伊弉諾) is a deity born of the seven divine generations in Japanese mythology and Shinto, and is also referred to in the roughly translated Kojiki as "male-who-invites" or Izanagi-no-mikoto ("Lord Izanagi"). It is also pronounced Izanagi-no-Okami ("The Great God Izanagi"). Jumala. Finnish: Jumala or Estonian: Jumal or Mari: Jumo [1] means "god" in the Finnic languages and those of the Volga Finns (Mari, Erzya and Moksha languages), both the Christian god and any other deity of any religion.

The word is thought to have been the name of a sky god of the ancient Finnic-speaking peoples. Jumala as a god of the sky is associated with the related Estonian Jumal, Mari Jumo and Bjarmian Jomali and is thought to stem from an ancient tradition of the Finno-Ugric peoples.[2][3] A related term appears also in the Mordvinic languages, jondol "lightning", literally "fire of Juma" (cf. tol "fire"). The name was borrowed by Baltic languages (cf. Jumis — Latvian god of fertility, one of the divine twins).[4] An Indo-Iranian origin for the name has been proposed, comparing e.g. Sanskrit dyumān "heavenly", but this remains disputed. Lei Gong. Statue of Lei Gong in Tainan Fengshen Temple ( the temple of Wind-god). 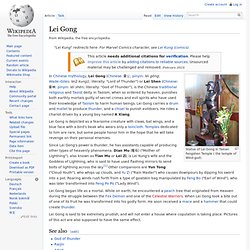 In Chinese mythology, Lei Gong (Chinese: 雷公; pinyin: léi gōng; Wade–Giles: lei2 kung1; literally: "Lord of Thunder") or Lei Shen (Chinese: 雷神; pinyin: léi shén; literally: "God of Thunder"), is the Chinese traditional religious and Taoist deity. In Taoism, when so ordered by heaven, punishes both earthly mortals guilty of secret crimes and evil spirits who have used their knowledge of Taoism to harm human beings. Lei Gong carries a drum and mallet to produce thunder, and a chisel to punish evildoers. He rides a chariot driven by a young boy named A Xiang. Lei Gong is depicted as a fearsome creature with claws, bat wings, and a blue face with a bird's beak who wears only a loincloth.

Marici (Buddhism) Marici Marici is usually depicted in one of the following ways: She has been depicted with one, three, five or six faces and two, six, eight, ten or twelve arms; three eyes; in her many-faced manifestations one of her faces is that of a sow. 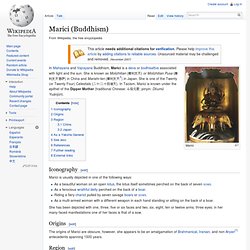 The origins of Marici are obscure, however, she appears to be an amalgamation of Brahmanical, Iranian, and non-Aryan[1] antecedents spanning 1500 years. Marici with eight-arms & four faces riding on a boar. Hongfashan Temple, Hong Kong. Rangi and Papa. Papa and Rangi held each other in a tight embrace In Māori mythology the primal couple Rangi and Papa (or Ranginui and Papatuanuku) appear in a creation myth explaining the origin of the world. 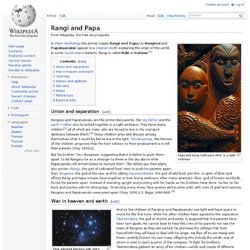 In some South Island dialects, Rangi is called Raki or Rakinui.[1] Union and separation[edit] Ranginui and Papatuanuku are the primordial parents, the sky father and the earth mother who lie locked together in a tight embrace. They have many children[2] all of which are male, who are forced to live in the cramped darkness between them.[3] These children grow and discuss among themselves what it would be like to live in the light.

But his brother Tāne disagrees, suggesting that it is better to push them apart, to let Ranginui be as a stranger to them in the sky above while Papatuanuku will remain below to nurture them. War in heaven and earth[edit] Tāne adorned Ranginui with stars. Ratri. Saranyu. Saraṇyū is the female form of the adjective saraṇyú, meaning "quick, fleet, nimble", used for rivers and wind in the Rigveda (compare also Sarayu). 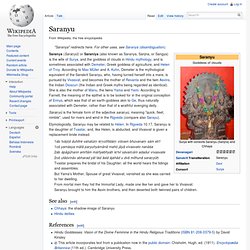 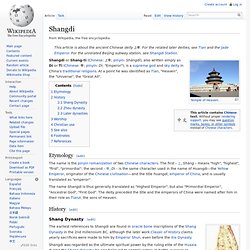 For the related later deities, see Tian and the Jade Emperor. For the unrelated Beijing subway station, see Shangdi Station. Shangdi or Shang-ti (Chinese: 上帝; pinyin: Shàngdì), also written simply as Di or Ti (Chinese: 帝; pinyin: Dì; "Emperor"), is a supreme god and sky deity in China's traditional religions. At a point he was identified as Tian, "Heaven", the "Universe", the "Great All". Etymology[edit] The name is the pinyin romanization of two Chinese characters. The name Shangdi is thus generally translated as "Highest Emperor", but also "Primordial Emperor", "Ancestral God", "First God". History[edit] Shang Dynasty[edit] The earliest references to Shangdi are found in oracle bone inscriptions of the Shang Dynasty in the 2nd millennium BC, although the later work Classic of History claims yearly sacrifices were made to him by Emperor Shun, even before the Xia Dynasty.

Tane-rore. In Maori mythology, Tane-Rore is the personification of shimmering air as he performs a haka for his mother Hine-ruamati. Tāwhirimātea. In Māori mythology, Tāwhirimātea (or Tāwhiri) is the god of weather, including thunder and lightning, wind, clouds and storms. He is a son of Papatūānuku (earth mother) and Ranginui (sky father). In his anger at his brothers for separating their parents, Tāwhirimātea destroyed the forests of Tāne (god of forests), drove Tangaroa (god of the sea) and his progeny into the sea, pursued Rongo and Haumia-tiketike till they had to take refuge in the bosom of their mother Papa, and only found in Tūmatauenga a worthy opponent and eternal enemy (Tregear 1891:499).

Uenuku. Ushas. Ushas (उषस्; uṣas), Sanskrit for "dawn",[1] is a Vedic deity, and consequently a Hindu deity as well. Ushas is an exalted goddess in the Rig Veda but less prominent in post-Rgvedic texts.