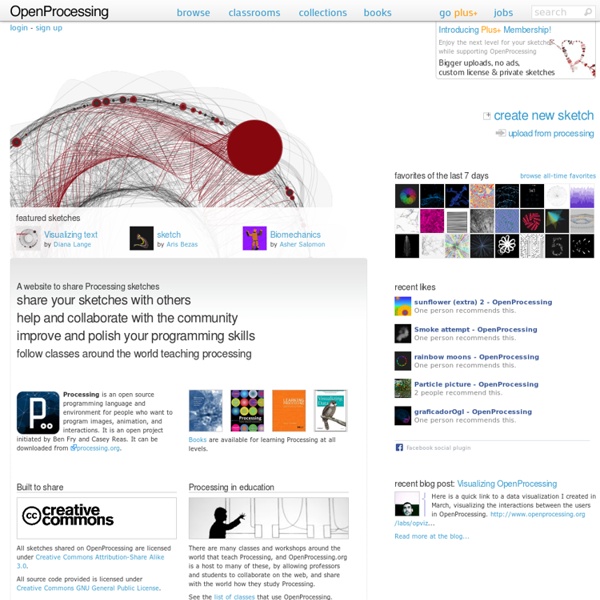 favorites of the last 7 days A website to share Processing sketches Processing is an open source programming language and environment for people who want to program images, animation, and interactions. It is an open project initiated by Ben Fry and Casey Reas. It can be downloaded from processing.org.

GuruBlog Blender 2.80 beta has been released! yea! party! ok - for real now - blender 2.80 is the next big release of blender, 3 years in the making and packed with new features, a new render engine, support for 2D animations, a new ui, ... lots of new stuff to learn and explore

SlatePro Personal TechDesk: For Your Home, Office, or Apartment Designed for your office, home, or apartment and made for professionals, students, designers, gamers, or just anyone with a desk. You won’t have to organize your SlatePro, it was designed to organize you. It’s your personal TechDesk. The best free presentation software and other alternatives to Microsoft PowerPoint More has been written about the art of the presentation than could ever be covered here, but one thing that usually accompanies your co-workers’ demos are PowerPoint slides. PowerPoint wasn’t always a Microsoft product — it was originally called Presenter and created for Macs. The name was changed for legal reasons in 1987, the same year Microsoft bought the company behind it and created its Graphics Business Unit. SEE ALSO: Illegal downloaders to receive email warnings, as Pirate Bay traffic doubles

DesignCloud Spector by Fiana O’Leary As her graduation project from the Royal College of Art, designer Fiona O’Leary invented a device that scans and identifies typeface and colours — beaming the samples directly to a nearby computer or storing the information for later. While currently only a prototype, it’s clear that Spector could become wildly popular with graphic designers and typophiles.