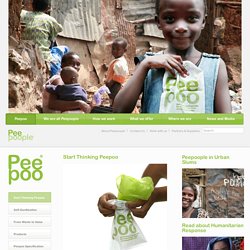 Peepoo is in the form of a slim biodegradable bag, with an inner layer that unfolds to form a wide funnel. It is easy to store, handle and use. Peepoo is intended to be used a single time, by one person, whenever and wherever needed. Unlike traditional toilets or latrines, Peepoo is never occupied by anyone else. It is always clean and can be used in complete privacy. Recognising consumer needs, Peepoo is formulated from a bottom-up perspective that puts the user’s need first. Peepoo works as an every day toilet and can also be used as a complementary sanitation system at night, at work, or at school. After use, even if no collection or disposal services are available nearby, Peepoo does not contaminate the environment once the top of Peepoo has been tied into a knot.

Due to its self-sanitising attributes, Peepoo remains safe to hold and carry after use. GCSE Urban environments. Facts and Information about Kibera - Kibera. Kibera UK - The Gap Year Company There are approx 2.5 million slum dwellers in about 200 settlements in Nairobi representing 60% of the Nairobi population, occupying just 6% of the land. 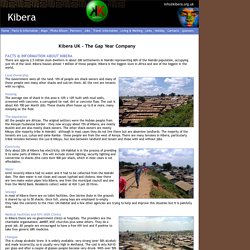 Kibera houses almost 1 Million of these people. Kibera is the biggest slum in Africa and one of the biggest in the world. Land Ownership The Government owns all the land. 10% of people are shack owners and many of these people own many other shacks and sub-let them. Housing The average size of shack in this area is 12ft x 12ft built with mud walls, screened with concrete, a corrugated tin roof, dirt or concrete floor. The population All the people are African. Electricity Only about 20% of Kibera has electricity.

10 Kibera case study. 10 GCSE Case Study Kibera. Solution to Kenyan slum's 'flying toilets' Nairobi - The usually straightforward act of going to the toilet is far from simple in Kibera, the sprawling slum on the edge of Kenya's capital. 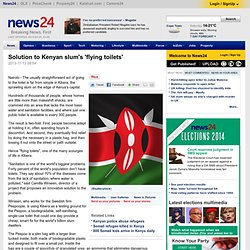 Hundreds of thousands of people, whose homes are little more than makeshift shacks, are crammed into an area that lacks the most basic water and sanitation facilities, and where just one public toilet is available to every 300 people. The result is two-fold: First, people become adept at holding it in, often spending hours in discomfort.

And second, they eventually find relief by doing the necessary in a plastic bag, and then tossing it out onto the street or path outside. Hence "flying toilets", one of the many scourges of life in Kibera. "Sanitation is one of the world's biggest problems. Wirseen, who works for the Swedish firm Peepoople, is using Kibera as a testing ground for the Peepoo, a biodegradable, self-sanitising, single-use toilet that could one day provide a cheap, smart fix for the world's billion slum dwellers.