3.2 Urban trends and issues of urbanisation. 3.3 The changing structure of urban settlements. 3.4 The management of urban settlements. Nottingham named England's least car-dependent city. Nottingham has been named as England's least car-dependent city in a survey that exposes inconsistent planning across the country with one of the nation's newest conurbations, Milton Keynes, labelled the worst for cyclists and bus users. 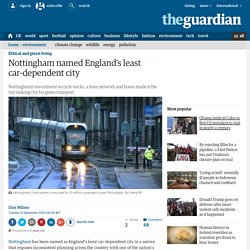 Award-winning bus services, a European-style embrace of the tram and a bias against out-of-town shopping centres were cited as powerful incentives for residents of Nottingham to leave their cars at home, according to a report by the Campaign for Better Transport. By contrast, Milton Keynes, trumpeted as the epitome of modern urban dwelling in the 1980s, is criticised for a reliance on the motor vehicle to get people from A to B. Nottingham's investment in 30 miles of cycle tracks, a nine-mile tram network and 230,000 miles of bus journeys per week made it the top ranking city overall.

"It ranked highly for factors such as bus patronage, satisfaction with bus services and low car use for the school run. "Milton Keynes was designed for the car. Who owns our cities – and why this urban takeover should concern us all. Does the massive foreign and national corporate buying of urban buildings and land that took off after the 2008 crisis signal an emergent new phase in major cities? 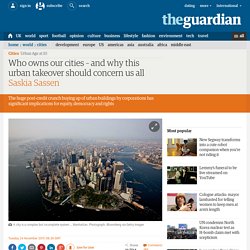 From mid-2013 to mid-2014, corporate buying of existing properties exceeded $600bn (£395bn) in the top 100 recipient cities, and $1trillion a year later – and this figure includes only major acquisitions (eg. a minimum of $5m in the case of New York City). I want to examine the details of this large corporate investment surge, and why it matters. Cities are the spaces where those without power get to make a history and a culture, thereby making their powerlessness complex.

If the current large-scale buying continues, we will lose this type of making that has given our cities their cosmopolitanism. London Reborn. On January 6th 2015, or thereabouts, London hits an extraordinary milestone – the population finally catches up with its 1939 peak population – from now on it will be an all-time high. 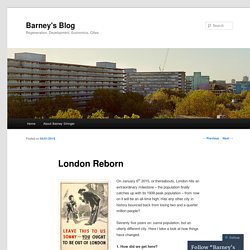 Has any other city in history bounced back from losing two and a quarter million people? Seventy five years on: same population, but an utterly different city. Here I take a look at how things have changed. 1. How did we get here? London became the biggest city in Europe in the 18th Century (overtaking Constantinople) and then huge Victorian growth saw it become the biggest city the world had ever seen. Population peaked in 1939 at 8.615 million and immediately began a rapid fall. What went wrong? Belgrade Waterfront: an unlikely place for Gulf petrodollars to settle.

The hundreds of Syrians camped out on the green beside Belgrade’s bus station had moved on, headed for the European Union. The only traces of their presence were a row of portable toilets, Arabic notices on a help kiosk and a cordon around some tired-looking grass. But just nearby, a very different Arab arrival is emerging in the Serbian capital. Belgrade Waterfront is a €3.5bn (£2.5bn) project of condominiums, hotels, offices, retail, parks and paths dominated by a glass skyscraper that will be the tallest between Vienna and Istanbul.

Its developer is Abu Dhabi-based Eagle Hills, chaired by Mohamed Alabbar, who previously founded Emaar, builders of the world’s largest shopping mall and tallest building, both in Dubai. Their project manager in Belgrade, Nikola Nedeljkovic, says that “we envisage Belgrade Waterfront to be a game-changing hub for Serbia”, and that it “takes into consideration the balanced sensitivity to nature, culture and modernity”. Meanwhile, Savamala is changing fast. Lego: can this most analogue of toys really be a modern urban planning tool? One September day in 2005, the Danish artist Olafur Eliasson set up a few tables in a bustling downtown square in Tirana and unloaded three tonnes of Lego bricks. 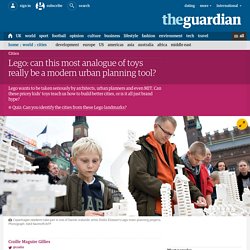 The Copenhagen-born, Berlin-based artist, known for his enormous, immersive installations – he once installed a gigantic, glowing sun at Tate Modern – included simple instructions: residents of the crumbling Albanian capital, which was recovering from the end of communist rule in 1990, were to construct their visions for the city’s future out of Lego. “Building a stable society,” Eliasson said, “is only possible with the involvement and co-operation of each individual.” As the days passed, everyone from kids to adults, passers-by to committed users, gradually turned the plastic rubble into a glistening white Lego metropolis.

It’s at this point that one could be forgiven for raising an eyebrow. Urban areas are bigger, denser, more complex and more reliant on technology than ever before. Megacities Reflect Growing Urbanization Trend. The dangers of eco-gentrification: what's the best way to make a city greener? When construction on New York City’s famous High Line began in 2006, the project to turn a remnant of the industrial age into a post-industrial garden and tourist attraction appeared innovative, but potentially very risky. 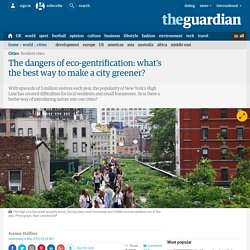 In fact, having finally opened in 2009, the High Line is now suffering from its own success: with more than 5 million estimated visitors to the site each year, this greening initiative has managed to transform the entire socio-economic character of the neighbourhood that surrounds it. Many small businesses and moderate-income residents have been forced to relocate due to rising land values, while even those who can afford it have begun to experience the downsides of living or working in an area that panders to tourists.