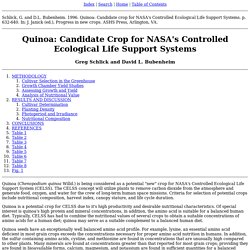 Can growing lettuces in the cloud help feed the world? Image copyright Fujitsu Since off-season cucumbers were grown under "transparent stone" - an early version of the greenhouse - for the Roman Emperor Tiberius, we've been trying to bend Mother Nature to our will. 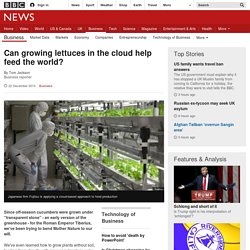 We've even learned how to grow plants without soil, feeding them directly with mineral nutrients in water, often under artificial light. Zoologger: Octopus makes own quicksand to build burrow on seabed. (Image: Mark Norman) Species: The southern sand octopus (Octopus kaurna)Habitat: The seafloor on the south-eastern coast of Australia The southern sand octopus has taken hide-and-seek to a whole new level. 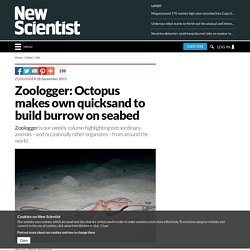 Tree of Life. Scaling Laws and the Speed of Animals. [Total: 12 Average: 4.3/5] You must sign in to vote In a recent issue of the American Journal of Physics, I read an interesting paper by Nicole Meyer-Vernet and Jean-Pierre Rospars examining the top speeds of organisms of varying sizes, from bacteria up to blue whales. 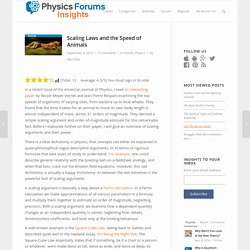 They found that the time it takes for an animal to move its own body length is almost independent of mass, across 21 orders of magnitude. They derived a simple scaling argument and order-of-magnitude estimate for this remarkable fact. Before I elaborate further on their paper, I will give an overview of scaling arguments and their power. There is a false dichotomy in physics, that concepts can either be explained in quasi-philosophical vague descriptive arguments, or in terms of rigorous formulae that take years of study to understand. A scaling argument is basically a step above a Fermi calculation.

Cheetah - a beautiful creature. Eye Shape May Help Distinguish Predator From Prey. Why do the eyes of some animals, including goats, have horizontal-shaped pupils, while others, such as rattlesnakes and domestic cats, have vertical slits? 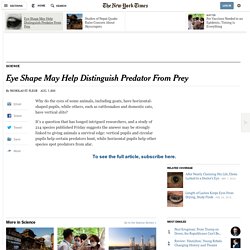 It’s a question that has longed intrigued researchers, and a study of 214 species published Friday suggests the answer may be strongly linked to giving animals a survival edge: vertical pupils and circular pupils help certain predators hunt, while horizontal pupils help other species spot predators from afar. This Plant Feasts on More than 6,000 Insects an Hour. Researchers discover first sensor of Earth's magnetic field in an animal. A team of scientists and engineers at The University of Texas at Austin has identified the first sensor of the Earth's magnetic field in an animal, finding in the brain of a tiny worm a big clue to a long-held mystery about how animals' internal compasses work. 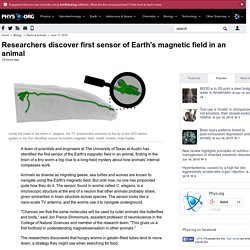 Animals as diverse as migrating geese, sea turtles and wolves are known to navigate using the Earth's magnetic field. But until now, no one has pinpointed quite how they do it. The sensor, found in worms called C. elegans, is a microscopic structure at the end of a neuron that other animals probably share, given similarities in brain structure across species. How Dinosaurs Shrank and Became Birds. From Quanta Magazine (find original story here). 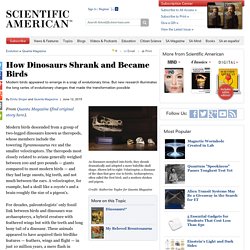 Modern birds descended from a group of two-legged dinosaurs known as theropods, whose members include the towering Tyrannosaurus rex and the smaller velociraptors. The octopus can see with its skin. Octopuses are well known for changing the colour, patterning, and texture of their skin to blend into their surroundings and send signals to each other, an ability that makes them both the envy of, and inspiration for, army engineers trying to develop cloaking devices. 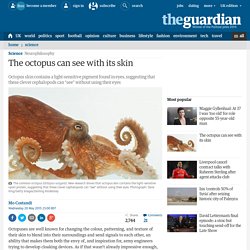 As if that wasn’t already impressive enough, research published today in the Journal of Experimental Biology shows that octopus skin contains the pigment proteins found in eyes, making it responsive to light. These clever cephalopods can change colour thanks to specialised cells called chromatophores, which are packed in their thousands just beneath the skin surface. Each of these cells contains an elastic sac of pigmented granules surrounded by a ring of muscle, which relax or contract when commanded by nerves extending directly from the brain, making the colour inside more or less visible.

Octopuses are thought to rely mainly on vision to bring about these colour changes. Tortoise Skeleton. How This Beetle Creates 500 Explosions Per Second In Its Bum. There are few defences more extreme than that of the bombardier beetles. 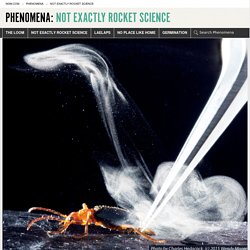 These insects deliberately engineer explosive chemical reactions inside their own bodies, so they can spray burning, caustic liquid from their backsides. The liquid can reach up to 22 miles per hour, at temperatures of around 100 degrees Celsius. Chameleon colours 'switched by crystals' 11 March 2015Last updated at 03:51 ET By Jonathan Webb Science reporter, BBC News The study was conducted on panther chameleons, which are popular pets Swiss researchers have discovered how chameleons accomplish their vivid colour changes: they rearrange the crystals inside specialised skin cells. 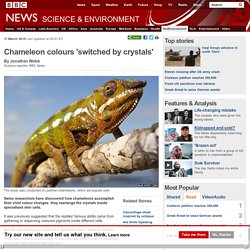 It was previously suggested that the reptiles' famous ability came from gathering or dispersing coloured pigments inside different cells. But the new results put it down to a "selective mirror" made of crystals. They also reveal a second layer of the cells that reflect near-infrared light and might help the animals keep cool. Reptiles make colours in two ways: they have cells full of pigment for warm or dark colours, but brighter blues and whites come from light bouncing off physical elements like these crystals: so-called "structural colours". Have a scientific problem? Steal an answer from nature. The Cold War has been over for decades, but in the dark, frigid waters deep under the oceans, nuclear armed submarines still ply their grim patrol. These instruments of war are pinnacles of advanced engineering.

Bar-headed geese: Highest bird migration tracked. 15 January 2015Last updated at 14:02 ET By Victoria Gill Science reporter, BBC News A tracking study has revealed the secrets of the world's highest bird migration - the Himalayan flight of the bar-headed goose. The geese have been recorded at heights of more than 7,000m (23,000ft). Now, a team led by researchers from Bangor University has tracked the flight and revealed the basis for the birds' "rollercoaster flight" pattern.

The findings, published in Science, show how the birds hug the mountainous terrain, and that this saves energy. In previous tests, the researchers trained the birds to fly in wind tunnels and to wear masks that monitor their oxygen intake. Why flowers near the equator 'get a tan' The discovery by German zoologist Constantin Wilhelm Lambert Gloger in 1833 that warm-blooded animals closer to the equator tend to be darker applies to plants, too, new research confirms. One of the reasons investigators have not previously pursued proof of Gloger’s rule in flowers is that pollinators, such as bees, don’t see what we see when they look at a flower.

They see in the ultraviolet as well as visible ranges. What appears bright yellow to a person can appear dark or patterned to a bee. Sweet centers For the study, published in Nature Plants, researchers studied the flowers of Argentina anserina, a plant in the rose family, across four lines of latitude—three in the Northern and one in the Southern Hemisphere.

Biologists’ Clever Way to Detect Animals They Can’t Find. Wildlife doesn’t get much weirder than the hellbender, a frilly, crayfish-gobbling salamander, about the length of a baby alligator, whose bizarre aliases include “snot otter,” “devil dog,” and “grampus.” The giant amphibian stalks rocky streambeds throughout the eastern United States—or at least it did, until agriculture, deforestation, and dams ruined water quality and habitats throughout much of its range. These days, scientists aren’t certain where snot otters still roam. Electric eels 'remotely control their prey' Scientists discover how animals orient themselves. Picture yourself exiting a subway car. You step onto the platform and for a moment, you’re completely disoriented. It feels weird, because when you entered the car at another station, you knew north from south, but now you’re turned around.

Cheetah running. MANTIS MURDER SHRIMP (Slow Motion) - Smarter Every Day 121. Desert Plant Derives Up To 90% Of Water-Intake From Gypsum Rock. Scientists have "hacked" photosynthesis, and it could help them speed up food production. An enzyme found in algae can make plants convert carbon dioxide into sugar more efficiently. Chicken Embryo Development. Hermit crab in glass shell. Cheetahs Move Like Race Cars. Cheetahs – the world’s fastest running land mammals — move like race cars, using a mixture of stealth and speed to win, a new study finds. Winning for cheetahs means killing desirable prey, with cheetahs zooming forward, making sharp turns and screeching to a stop as needed during a hunt. “Predator and prey thus pit a fine balance of speed against maneuvering capability in a race for survival,” John Wilson of North Carolina State University’s Department of Biology and colleagues report.

(Phys.org) —New research shows that to prevent starvation at night, plants perform accurate arithmetic division. Corpse Flower - Amorphophallus titanum. Corpse flower when not blooming. A "shark's eye" view: Witnessing the life of a top predator. Fruits And Veggies Are Alive, Can Defend Against Herbivores. Beautiful creature from the Mariana Trench. Slime Mold Smarts. True Facts About The Chameleon. Brains of rats connected allowing them to share information via internet.