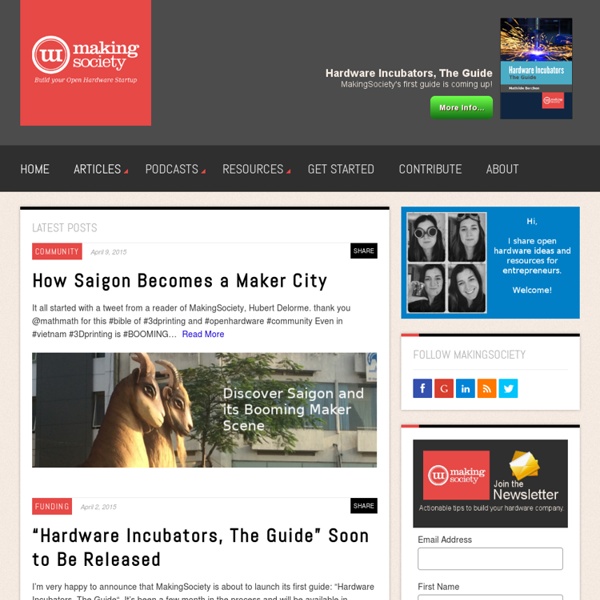 3D Printing Minecraft – an Interview with Eric Haines, Mineways Eric Haines is engineer at Autodesk. In his spare time, he develops Mineways, a software that lets you 3D print Minecraft worlds and characters. He does it just for fun…. Read More Celebrate Arduino Day Online

My Paper Crane Here it is nearing the end of April and I forgot to blog about the Bag Of The Month bag for March! As you can see I ended up having a sad photoshoot in my car one afternoon while I was waiting to pick up my son after school. I have actually been using this bag all month long. The fabric was one I saw on Pinterest and fell in love with Ring Around The Rosie by Michael Miller. How to Make Everything Ourselves: Open Modular Hardware A modular system unites the advantages of standardisation (as parts can be produced cheaply in large amounts) with the advantages of customisation (since a large diversity of unique objects can be made with relatively few parts). Modularity can be found to a greater or lesser extent in many products (like bicycles and computers) and systems (like trains and logistics), but the best examples of modular systems are toys: LEGO, Meccano, and Erector (which is now the brand name of Meccano in the US). LEGO, Meccano and Erector are composed of relatively few elementary building blocks, which can be used to build various objects.

Fab Foundation – Setting up a Fab Lab You are on the front wave of a new, international movement in personal fabrication—and therefore you would be considered an “early adopter. The cheapest and fastest method to get a fab lab is to buy and assemble it yourself. This approach does require that you have some good expertise on hand to help you set up, install, debug and train. There are a few other ways to get a lab, but they are more expensive and require some contractual transactions. Here’s the road map: The inventory of hardware and materials that we deploy in a full Fab Lab can be found at: .

The maker movement isn’t just for hackers anymore “I’ve always done a certain amount of work with my hands, but my whole career was in software.” Rich Pekelney (pictured above) is standing in front of one of many mammoth machines in San Francisco’s TechShop, a DIY paradise full of industrial equipment for makers of all kinds. The space is intimidating at first glance. Loud mechanisms tower and sprawl around the workshop’s several stories; people in welding masks and heavy protective gloves quietly bustle from one corner to another. But after a few minutes in the shop, its aura of mystery quickly disappears.

Over 75 Entries for 3D printing at Maker Faire New York 2012 Sep.27, 2012 This weekend, on Saturday, Sept. 29, and Sunday, Sept. 30, attendees at World Maker Faire, at the New York Hall of Science (NYSCI) in Queens, N.Y. will get a chance to feel the 3D printing enthusiasm at two venues: the 3D Printer Village and the 3D Pavilion. (Click to enlarge) 3D Printing is the hottest area at World Maker Faire this year. As more 3D printer startups enter the market and compete on price -- with new offerings under $1,000 -- the interest is going mainstream. In fact, attendees at World Maker Faire will be treated to a 3D extravaganza -- from three times the number of personal 3D printers to a diverse display of 3D printed objects including a 3D printed humanoid robot and 3D printed food.

How to Fold Wet Origami Sounds like an anomaly, right? When I was a kid folding frogs, my mother gave me origami paper that was most certainly dry. But the works below by Vietnamese-American artist Giang Dinh were folded with one *wet* piece of paper. It's a technique called "Wet-Folding", invented by the great Japanese origami master Akira Yushizawa (pictured right). Yushizawa was the first to contextualize origami as more of an artform than a craft, and he did so by introducing a more organic, sculptural look—one with soft and curved creases and rounded shapes.