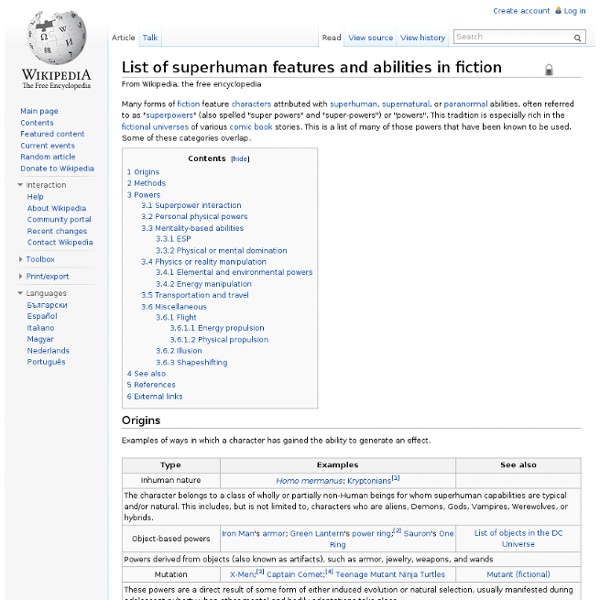 Origins Examples of ways in which a character has gained the ability to generate an effect. Methods Examples of methods by which a character generates an effect. Powers Superpower interaction This section refers to the ability to manipulate or otherwise interact with superpowers themselves, not "power" such as electrical power or gravitational power. Personal physical powers Powers which affect an individual's body. Mentality-based abilities The abilities of extra-sensory perception (ESP) and communication. Physical or mental domination Physics or reality manipulation These powers may be manifested by various methods, including: by some method of molecular control; by access to, or partially or fully shifting to another dimension; by manipulating the geometric dimensions of time or space; or by some other unnamed method. Elemental and environmental powers Ability to control or manipulate the elements of nature. Energy manipulation These powers deal with energy generation, conversion and manipulation.

Character Trait Chart Character Trait Chart and Personality Components It can sometimes be helpful to make a Trait Chart for each character. This is especially helpful during the early stages of character development, before the character becomes as real to you as your mother. There are several charts of this sort available, some extremely detailed and some containing only facts and figures. 25 Ways To Fuck With Your Characters As storyteller, you are god. And to be frank, you’re not a particularly nice god — at least, not if you want your story to resonate with readers. A good storyteller is a crass and callous deity who treats the characters under his watchful eye like a series of troubled butt-puppets.

Historical Romance Author Robyn DeHart, Legend Hunters , Ladies Amateur Sleuth Society Theme & Premise: Or How to Plot a Character Driven Book in 3 Easy Steps It is said that there are two types of writers: plotters and seat of the pants writers (or fly into the mist writers). Obviously the majority of us fall somewhere in between.

Top 10 Tricks to Make your Villain Stand Out Welcome back to the column that breaks down gaming into what’s really important, ten things at a time! Any story arc needs a good villain. The best big bads are more than just another devil or vampire or dragon. These ten suggestions can help take your villain above and beyond the ordinary and give your players a more memorable game. 1. Means to Power.

Seven Common Character Types Seven Common Character Types by Terry W. Ervin II Fiction writers employ a variety of characters while weaving their tales. Beyond the standard definitions of protagonist (the main character in a literary work) and antagonist (the main character or force that opposes the protagonist in a literary work), recognizing the types of characters and the parts they play while reading an interesting story can add to the experience. In addition, a fuller understanding of the character types and their uses can increase a writer’s effectiveness in weaving his own fictional tales. Below is a list of common character types, followed by an explanation and short example.

Creating Villains People Love to Hate by Lee Masterson Every story has to have a bad guy. There wouldn't be much conflict for your protagonist to overcome if there was no antagonist to stir the pot. Yours might be the evil villain who opposes everything your hero (or heroine) does. He might be the treacherous double-agent from the past, or the psychotic evil scientist, or maybe just the "other woman" fighting for your hero's attention. Personality Traits, Character traits, Human Traits, personal characteristics, human qualities, Traits of Human Consciousness, human makeup, personal attitudes, negative attitudes, positive attitudes, list, makeup of the individual human, endowments, consc Several Steps Further: Aside from the listing above, traits of human consciousness can be viewed from a number of other perspectives. Here are several: Traits Organized from Psychological (Inner-oriented) to Social (Outer-oriented) Human personality/character traits can be divided by those that are inner/psychological; and those that are outer-oriented/social. (They can then be further divided positively and negatively.)

Creative Writing For Dummies Cheat Sheet Rewriting and editing helps to tighten up your work. But it can be difficult – what to chop and when to stop may not be clear, and you may change your mind more than once during the process. Ask yourself whether you need to take out: Unnecessary information and explanation. Characterisation How to write convincing characters Characterisation - the task of building characters - isn't easy. But if you're struggling to build characters with real life and vigour, just follow these rules. If you do follow them correctly, we can pretty much guarantee that your characterisation will be just fine! 25 Things You Should Know About Character - StumbleUpon Previous iterations of the “25 Things” series: 25 Things Every Writer Should Know 25 Things You Should Know About Storytelling And now…

5 Building Blocks of Your Characters Personality by Mark Nichol Now that you’ve decided what your character’s motivation is, it’s time to actually construct the vessel in which this purpose will reside. Just how do you build a person? By creating a life where none existed. Start at the base, and work your way up: Fiction Writer's Character Chart - EpiGuide.com If you're a fiction writer -- whether you're working on a novel, short story, screenplay, television series, play, web series, webserial, or blog-based fiction -- your characters should come alive for your reader or audience. The highly detailed chart below will help writers develop fictional characters who are believable, captivating, and unique. Print this page to complete the form for each main character you create. IMPORTANT: Note that all fields are optional and should be used simply as a guide; character charts should inspire you to think about your character in new ways, rather than constrain your writing. Fill in only as much info as you choose.