Monthly How-To Health Information Compliance Coding Articles. Now that the HITECH Act and other provisions are there to safeguard PHI, you need a trusted resource to sidestep the tiered penalty structure for violations - or you could be slammed with big penalties, in some cases as bad as $50,000 per violation! 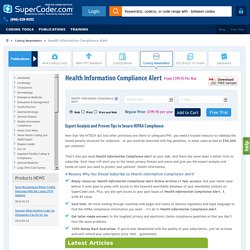 That’s why you need Health Information Compliance Alert on your side. And there has never been a better time to subscribe. Each issue will alert you to the latest privacy threats and scams and give you the expert analysis and hands-on tools you need to protect your patients’ health information. ICD 10 Conversion - ICD 9 to ICD 10 Superbill Converter Tool. » If It’s Complicated, You Need Modifier 78. When a postsurgical complication requires a return to the operating room for a Medicare patient, following modifier 78 guidelines can save you money. 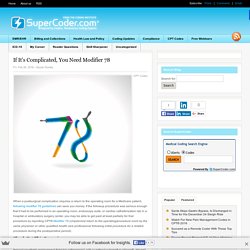 If the followup procedure was serious enough that it had to be performed in an operating room, endoscopy suite, or cardiac catheterization lab in a hospital or ambulatory surgery center, you may be able to get paid at least partially for that procedure by reporting CPT® Modifier 78 (Unplanned return to the operating/procedure room by the same physician or other qualified health care professional following initial procedure for a related procedure during the postoperative period). » Heart Disease – Number One Killer. 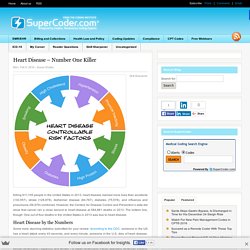 However, the Centers for Disease Control and Prevention’s data did show that cancer ran a close second to heart disease at 584,881 deaths in 2013. The bottom line, though: One out of four deaths in the United States in 2013 was due to heart disease. Heart Disease by the Numbers Some more stunning statistics submitted for your review: According to the CDC, someone in the US has a heart attack every 43 seconds, and every minute, someone in the U.S. dies of heart disease.

Multispecialty Coder – Multispecialty Coding Tool for Small Practices. View / download Instruction Manual with FAQs Now save time and ensure efficient workflow with the most powerful coding tools and get access to 120 articles from more than 25 coding and compliance newsletters from Eli Healthcare and TCI – all in one multispecialty coding resource! 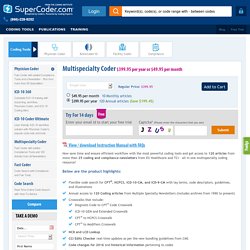 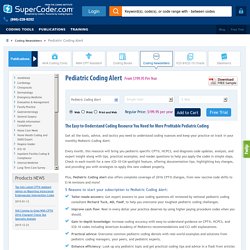 Every month, this resource will bring you pediatric-specific CPT®, HCPCS, and diagnosis code updates, analysis, and expert insight along with tips, practical examples, and reader questions to help you apply the codes in simple steps. Check in each month for a new ICD-10-CM spotlight feature, offering documentation tips, highlighting key changes, and providing you with strategies to apply this new codeset properly. » Check Out 2016 CPT® Changes for Interventional Radiology, Molecular Pathology, and Pain Management. Today we present coverage of the second day of the AMA’s CPT® and RBVRS 2016 Annual Symposium in Chicago. 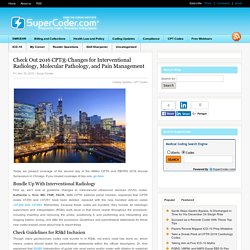 If you missed coverage of day one, go here. Bundle Up With Interventional Radiology First up, we’ll look at guideline changes to intravascular ultrasound services (IVUS) codes. » Ring In the New Year With Review of CMS Policy Changes. We’ve already talked here a lot about CPT® changes for 2016. 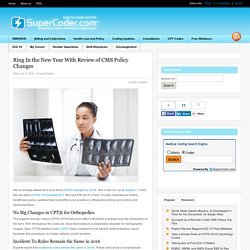 And in the run up to October 1, it felt like we were on ICD-10 overload 24/7. But now that 2016 is here, it’s also important to review healthcare policy updates that could affect your practice’s orthopedics billing and coding and reimbursement. No Big Changes in CPT® for Orthopedics The biggest change I saw in CPT® 2016 that could affect orthopedic practices was the elimination of the term “film” throughout the code set, since that medium is essentially obsolete for radiographic images.

Also, CPT® deleted code 21805 (Open treatment of rib fracture without fixation, each) because this procedure no longer reflects current practice. Incident-To Rules Remain the Same in 2016 Experts report that incident-to rules remain the same in 2016. ICD-10 Coding Alert. » Time Flies—CPT® 2016 Goes Live Next Week! As of today—Christmas Eve—a mere eight days remain in 2015, and only five of those are business days. 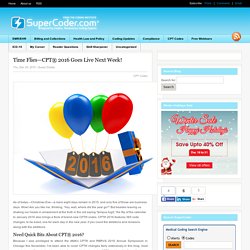 Wow! Five Essential Tips for Successful ICD-10... » Santa Skips Gastric Bypass, Is Discharged in Time for His December 24 Sleigh Ride. Halloween is long gone, Thanksgiving is over, and Christmas is coming fast! 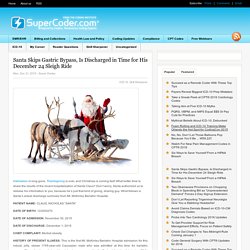 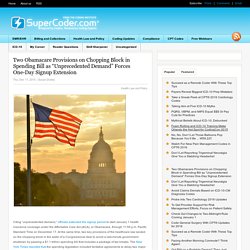 Pacific Standard Time on December 17. At the same time, two key provisions of the healthcare law landed on the chopping block in the wake of a Congressional deal to avoid a last-minute government shutdown by passing a $1.1 trillion spending bill that includes a package of tax breaks. The New York Times reported that the spending legislation included tentative agreements to delay two major provisions of the ACA: suspending the medical device tax and delaying the planned “Cadillac” tax on high-cost employer-sponsored health plans. Medical Device Manufacturers Look For a Win in Tax Suspension At the time of its passage in 2010, the Affordable Care Act included a medical device tax, which quickly became one of the health law’s most controversial pieces. » Don’t Let Reporting Trigeminal Neuralgia Give You a Stabbing Headache!

Have you been flummoxed by coding the diagnosis of trigeminal neuralgia or tic douloureaux? Let’s take the headache (pun intended) out of this task with a little background on this condition and its reporting rules. » Probe Into Two Cardiology 2016 Updates. Can you believe 2015 is almost over? I can’t! But at least we know what’s coming in CPT® 2016. Today we’ll explore some of the changes coming to CPT® coding for the specialty of cardiology.

Learn About Myocardial Strain Imaging CPT® 2016 releases a new temporary code for myocardial strain imaging, +0399T (Myocardial strain imaging [quantitative assessment of myocardial mechanics using image-based analysis of local myocardial dynamics] [List separately in addition to code for primary procedure]). Super Coder Special Offers - Thanksgiving. » Does Your Practice’s ICD-10-CM Clinical Documentation Need Improvement? Now that ICD-10 has been in place for almost two months, providers and practices are growing used to the changes in diagnosis coding that came with the implementation. This is a good thing, because as reimbursement models evolve towards payment for population outcomes instead of fee for service, ICD-10’s ability to record more detailed and accurate diagnostic information on your practice’s case mix becomes increasingly important.

But without accurate clinical documentation, correctly coding in ICD-10 is difficult if not impossible. Keep Your Documentation Accurate Clinicians must continue to document completely and accurately to support the codes they report, to avoid the risk of down coding, focused medical review, and even fraud investigations. Here are some areas of guidance for providers to review to determine whether their clinical documentation requires improvement. » Experiencing ICD-10 Encounters With Turkeys for Thanksgiving Day 2015. One thing’s for sure: This year’s Thanksgiving will be one for the record books.

Why? Not because of record-high sales on Black Friday, and not because the Thomas the Tank Engine balloon at the Macy’s Day Parade is bigger and bluer than ever. » Mark World Pneumonia Day With Prevention Efforts. November 12 is World Pneumonia Day! » Promote Diabetes Awareness with World Diabetes Day. Free ICD 9 to ICD10 Conversion. Top Challenges, Codes and Guidelines 2015. ICD10 Diagnosis Codes Lookup. For $249.95 per year or $29.95 per month The US government requires providers to start reporting medical diagnoses using the set of ICD-10-CM codes in less than one year.