Super Street Fighter II Turbo - Hitbox Theory Fighter. MacroLuaDocumentation - macrolua - This document is also available in the download package. - input playback and recording utility. The purpose of this Lua script is to play back and record sequences of button presses in a compact format that is easily readable and editable. 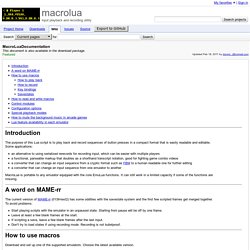 It can still work in a limited capacity if some of the functions are missing. The current version of MAME-rr (0139-test2) has some oddities with the savestate system and the first few scripted frames get merged together. Start playing scripts with the emulator in an unpaused state. Download and set up one of the supported emulators. Untitled. Vs. 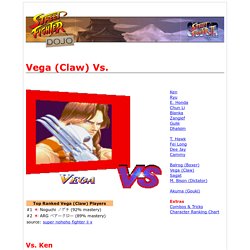 Ken 1 - ARG (Claw) vs. Aniken (Ken) Round 1: Ken Round 2: Claw Round 3: Clawyoutube.com link to video 2 - ARG (Claw) vs. Aniken (Ken) Round 1: Claw Round 2: Ken Round 3: Kenyoutube.com link to video. Strevival. T.Akiba's SF2 Data. Number of frames you have to cancel a normal into a special (or super), depending on whether it hit or whiffed. 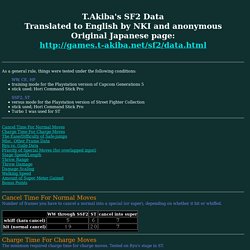 Charge Time For Charge Moves The minimum required charge time for charge moves. Tested on Ryu's stage in ST. ST charge times are not 100% set, which is why the "success rate" is listed for each move. For example, with Honda's Headbutt, about half the time you can get it with a 54-frame charge, but the other half of the time it requires a 55-frame charge. If you simply charge for one frame long than what is listed here, you will get the move pretty much every time. The Ease/Difficulty of Safe-jumpsA study of the exact frames which result in a Safe jump。 Reversal will be blocked, The exact frame on which there is a 50% chance of j. . 「０」 means there's no possible timing to land an absolutely guaranteed safe jump in。 Reference data: Speed of Getting UpThe numbers listed correspond to how many frames it takes the opponent to be able to jump after being knocked down by Ryu's Jab DP.

T-Akiba's Street Fighter 2 Frame Data. Notice #1: We can not guarantee that this document is error-free. 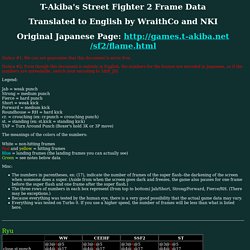 Notice #2: Even though this document is entirely in English, the numbers for the frames are encoded in Japanese, so if the numbers are unreadable, switch your encoding to Shift_JIS. Legend: Jab = weak punch Strong = medium punch Fierce = hard punch Short = weak kick Forward = medium kick Roundhouse = RH = hard kick cr. = crouching (ex: cr.punch = crouching punch) st. = standing (ex: st.kick = standing kick) TAP = Turn Around Punch (Boxer's hold 3K or 3P move) The meanings of the colors of the numbers: White = non-hitting frames Red and yellow = hitting frames Blue = landing frames (the landing frames you can actually see)Green = see notes below data Misc: The numbers in parentheses, ex: (17), indicate the number of frames of the super flash--the darkening of the screen when someone does a super.

Chun Li - The recovery time of the Kikouken is determined by the normal that was done just before the Kikouken. Blanka Guile Dhalsim. Vega (ST) - Shoryuken Wiki! ST Main PageThe Characters Introduction Vega is the self-proclaimed most handsome fighter in the world. 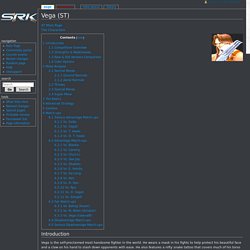 He wears a mask in his fights to help protect his beautiful face and a claw on his hand to slash down opponents with ease. He also features a nifty snake tattoo that covers much of his torso and one arm. Vega, from Spain, is sometimes known as the Spanish Ninja because of his blending of the matador and ninjitsu styles. --Vega 15:54, 6 February 2006 (CST) Competitive Overview Vega is considered top tier in ST, to the point where he was sometimes softbanned in Japanese tournaments. Street Fighter Dojo. The ST match vids + discussion thread - shoryuken. Super nohoho fighter ii x. Super Street Fighter II Turbo - Character Hitbox Diagrams. Kuroppi.strevival.com – Page not found.