How do fish make electricity? - Eleanor Nelsen. Cet animal est un expert de la régénération. Rat-taupe nu. Would You Want a Dog That Was Genetically Engineered to Be Healthier? “Dogs have more genetic diseases than any other species on the planet.” 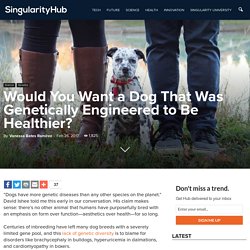 David Ishee told me this early in our conversation. His claim makes sense: there’s no other animal that humans have purposefully bred with an emphasis on form over function—aesthetics over health—for so long. Le blob, une créature mystérieuse - [Parlons peu parlons Science] Grow plants without water. Alice Moynihan Ever since humanity began to farm our own food, we’ve faced an unpredictable frenemy: rain. 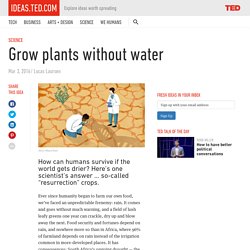 It comes and goes without much warning, and a field of lush leafy greens one year can crackle, dry up and blow away the next. Food security and fortunes depend on rain, and nowhere more so than in Africa, where 96% of farmland depends on rain instead of the irrigation common in more-developed places. It has consequences: South Africa’s ongoing drought — the worst in three decades — will cost it at least a quarter of its corn crop this year.

5 Strange Genetic Mutations, From Unbreakable Bones To Fish Odor Syndrome. Strange genetic mutations often play into the storylines of Hollywood action films, but in reality you don’t have to be a superhero to be a “mutant.” 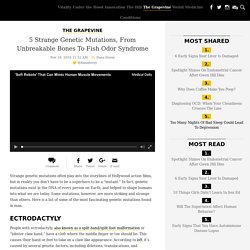 In fact, genetic mutations exist in the DNA of every person on Earth, and helped to shape humans into what we are today. Some mutations, however, are more striking and strange than others. Here is a list of some of the most fascinating genetic mutations found in man. Brazilian Wasp Venom Kills Cancer Cells, But Not Healthy Cells. Wasps get their fair share of bad press. 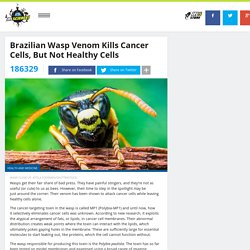 They have painful stingers, and they're not as useful (or cute) to us as bees. However, their time to step in the spotlight may be just around the corner: Their venom has been shown to attack cancer cells while leaving healthy cells alone. The cancer-targeting toxin in the wasp is called MP1 (Polybia-MP1) and until now, how it selectively eliminates cancer cells was unknown. According to new research, it exploits the atypical arrangement of fats, or lipids, in cancer cell membranes. Their abnormal distribution creates weak points where the toxin can interact with the lipids, which ultimately pokes gaping holes in the membrane. Researchers Identify Genetic Recipe For Lizard Tail Regeneration. Animals Fight Bacteria Using Stolen Defense Systems. Humans aren’t the only ones on the planet to be engaging in a battle against bacteria; these organisms are also constantly fighting each other over scarce resources. 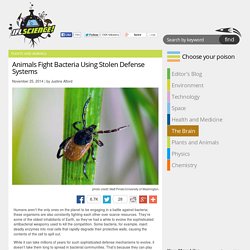 They’re some of the oldest inhabitants of Earth, so they’ve had a while to evolve the sophisticated antibacterial weaponry used to kill the competition. Some bacteria, for example, inject deadly enzymes into rival cells that rapidly degrade their protective walls, causing the contents of the cell to spill out. While it can take millions of years for such sophisticated defense mechanisms to evolve, it doesn’t take them long to spread in bacterial communities. Sea Slug Steals Photosynthesis Genes From Algae. The brilliant emerald green sea slug, Elysia chlorotica, spends months living on sunlight just like plants. 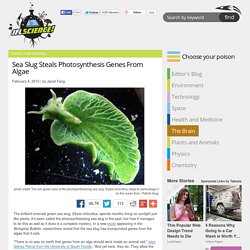 It’s been called the photosynthesizing sea slug in the past, but how it manages to do this as well as it does is a complete mystery. In a new study appearing in the Biological Bulletin, researchers reveal that the sea slug has incorporated genes from the algae that it eats. "There is no way on earth that genes from an alga should work inside an animal cell," says Sidney Pierce from the University of South Florida. "And yet here, they do. They allow the animal to rely on sunshine for its nutrition. Squid Can Recode Their Own Genetics.

A species of squid has been observed editing its own RNA to an amazing extent, creating the capacity to respond to changes in its environment by altering its proteins and therefore its entire body. 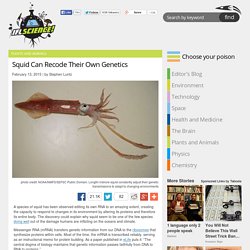 The discovery could explain why squid seem to be one of the few species doing well out of the damage humans are inflicting on the oceans and climate. Messenger RNA (mRNA) transfers genetic information from our DNA to the ribosomes that synthesize proteins within cells. Most of the time, the mRNA is transcribed reliably, serving as an instructional memo for protein building. As a paper published in eLife puts it: “The central dogma of biology maintains that genetic information passes faithfully from DNA to RNA to proteins.”

Occasionally, however, the memo gets changed in transmission.