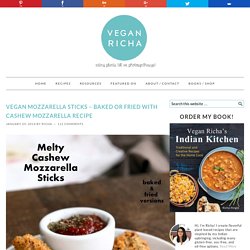 I say make the Cashew Mozzarella and keep it ready to make these sticks for the big game. Go Seahawks! Crispy, melty and yum.I also wanted to take a moment to thank each and every one of you who writes to me to say hello, with questions, a note of appreciation, and all the deluge of emails for being recipe testers! I am so so grateful for the love. It is practically impossible for me to write back to everyone, but I do try. More Gameday Ideas! Stir frequently and cook until the cheese gets thick and starts to leave the pan or is more doughy batter than liquid. Grease a pan with olive oil and drop the cheese mixture. Remove the cheese from the pan when ready to make the sticks. 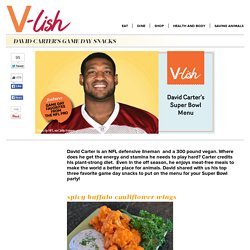 Where does he get the energy and stamina he needs to play hard? Carter credits his plant-strong diet. Even in the off season, he enjoys meat-free meals to make the world a better place for animals. David shared with us his top three favorite game day snacks to put on the menu for your Super Bowl party! Gluten-Free Chocolate Chip Cupcakes with Chocolate Frosting. The Raven Cocktail Recipe - Rum and Vodka Mixed Drink Recipe. The Raven is a dark and mysterious cocktail that I've adapted from other recipes. 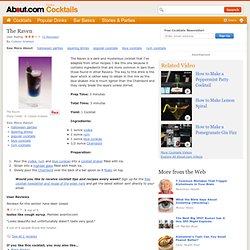 I like this one because it contains ingredients that are more common in bars than those found in other Ravens. The key to this drink is the layer which is rather easy to obtain in this mix as the blue shaken mix is much lighter than the Chambord and they rarely break the layers unless stirred. Purple Potato Salad Recipe : Duff Goldman. Easy Vegan Recipes: The Sexy Vegan's Bourbon Tempeh Sliders.

After talking to Brian L. 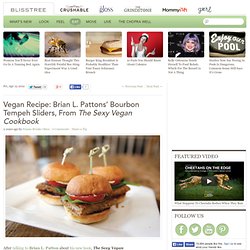 Patton about his new book, The Sexy Vegan Cookbook: Extraordinary Food from an Ordinary Dude, I knew I had to try some of his veganized spins on classic and awesome food. So I asked him what one of his favorite easy vegan recipes was (because, you’ll recall, the kitchen and I are not what you would call “close friends”), and he shared this one, for bourbon tempeh sliders.

The sliders are meant to be served with over-baked french fries and vegan “cheese” sauce with chili–all of which can be made basically however you want–but they’d also go great with a salad or other side. Or alone. Really, however you want. Here’s a note from Brian about the dish: If you’re only making one batch of these sliders, I recommend that you eat them alone. Ingredients (for six sliders): In a pan, heat 2 teaspoons of the oil over medium-high heat. Super Bowl Party Picks. The countdown to the Super Bowl has officially kicked off, but if you’re planning a party for game day, leave the greasy burgers and barbecued chicken on the sidelines. 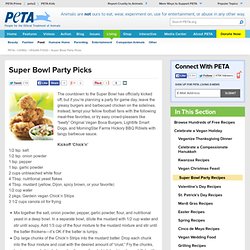 Chick patties This time I’m going to listen to my own advice, and just post the damn recipe. 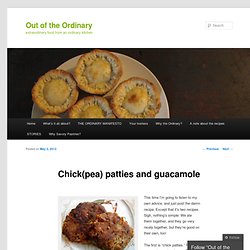 Except that it’s two recipes. Sigh, nothing’s simple. Purple Skinned Potato Salad. A recent study says a couple of servings of potatoes per day can lower blood pressure as much as oatmeal without causing weight gain. 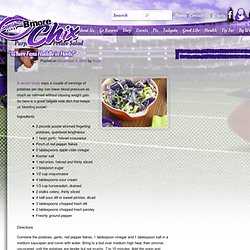 Whisk the remaining 4 tablespoons vinegar, the sugar and 1 teaspoon salt in a large bowl.