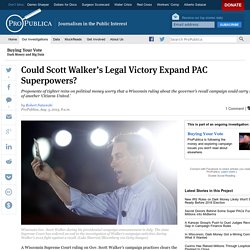 Scott Walker's campaign practices clears the way for state candidates to work more closely with legally independent political groups and their enormous war chests. The big unanswered question is how ripples from the case might spread beyond the state's borders. The ruling could spark attempts to overturn laws in other states that restrict such coordination. It may also embolden outside groups in the 2016 presidential campaign to edge closer to their favored candidates. And if the Wisconsin decision were to be appealed to the U.S. A ruling by the nation's highest court upholding the Wisconsin decision "could mean the evisceration of campaign contribution limits nationwide," said Daniel Weiner, an attorney at the Brennan Center for Justice at New York University. 4 ways super PACs are good for democracy. Are SuperPACs Good For Democracy? Hide captionJohn Donvan of ABC News moderates an Intelligence Squared debate on the regulation of money in politics. 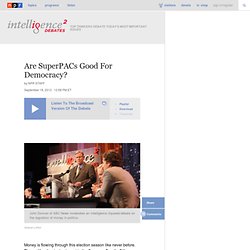 Samuel LaHoz John Donvan of ABC News moderates an Intelligence Squared debate on the regulation of money in politics. Money is flowing through this election season like never before. The proliferation is due in part to the Supreme Court's Citizens United decision and other recent rulings, which paved the way for superPACs, other outside groups and massive, secret donations from individuals, corporations and unions. Liberal Outside Money Groups Spend Big in North Carolina.

Most people have come to associate outside money — the hundreds of millions of dollars from politically active nonprofits and super PACs pouring into American elections — with conservatives. 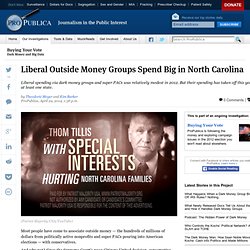 And why not? Since the Supreme Court's 2010 Citizens United decision, conservative groups have far outspent their liberal counterparts. In the 2012 federal election cycle alone, conservatives shelled out almost two and a half times the amount of outside money as liberal groups, including labor unions. New Tax Return Shows Karl Rove’s Group Spent Even More On Politics Than It Said. But that’s not what happened. 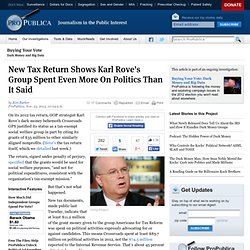 New tax documents, made public last Tuesday, indicate that at least $11.2 million of the grant money given to the group Americans for Tax Reform was spent on political activities expressly advocating for or against candidates. This means Crossroads spent at least $85.7 million on political activities in 2012, not the $74.5 million [4] reported to the Internal Revenue Service. A Vote for Unlimited Campaign Financing. The Difference Between SuperPACs and 501(c)(4) Nonprofits - By Jim Geraghty - The Campaign Spot. Over at Talking Points Memo, Benjy Sarlin argues that my article today is wrong, and the media narrative of cash-strapped President Obama, victimized by big-spending super PACs, is right. 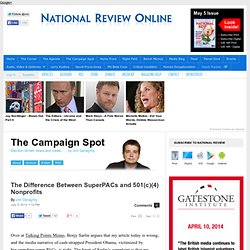 The heart of Sarlin’s complaint is that my review of FEC data is wrong because it doesn’t count the spending that isn’t included in the FEC data. PAC Track. Who are the Super PACs’ Biggest Donors? Super PACs. Super PACs are a new kind of political action committee created in July 2010 following the outcome of a federal court case known as SpeechNow.org v. 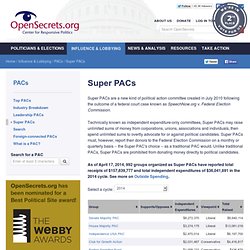 Federal Election Commission. Technically known as independent expenditure-only committees, Super PACs may raise unlimited sums of money from corporations, unions, associations and individuals, then spend unlimited sums to overtly advocate for or against political candidates. Super PACs must, however, report their donors to the Federal Election Commission on a monthly or quarterly basis -- the Super PAC's choice -- as a traditional PAC would. 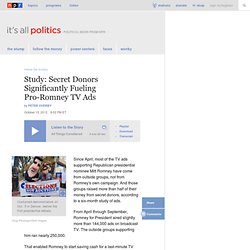 Doug Pensinger/Getty Images Costumed demonstrators on Oct. 3 in Denver, before the first presidential debate. Since April, most of the TV ads supporting Republican presidential nominee Mitt Romney have come from outside groups, not from Romney's own campaign. And those groups raised more than half of their money from secret donors, according to a six-month study of ads. Secret campaign donations. FEC Data Show Big Jump in Spending by Super PACs and Outside Groups. More money is coming into U.S. politics, and much of it is flowing in through new and barely regulated groups. 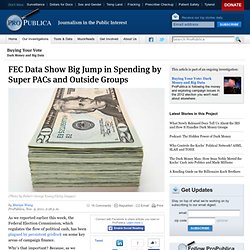 As we reported earlier this week, the Federal Election Commission, which regulates the flow of political cash, has been plagued by persistent gridlock [1] on some key areas of campaign finance. Romney Super PAC Assails Gingrich. Restore Our Future’s minute-long litany against Newt Gingrich. 7:31 p.m. | Updated A well-financed but largely unseen independent political group supporting Mitt Romney surfaced on Thursday in a big way, saying it was putting $3.1 million down on advertising in Iowa. 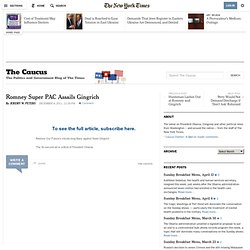 The ad campaign, which would be the biggest single purchase yet in the Republican primary this year, was notable also for a stealth bait-and-switch move. Colbert guest editorial: Naming rights, state mottoes and the GOP primary + video - Editorial Columns. As a proud son of South Carolina I must address recent unsubstantiated rumors published in The State that I, Stephen Colbert, tried to buy the naming rights to the 2012 Republican primary. 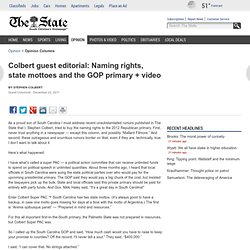 First, never trust anything in a newspaper — except this column, and possibly “Mallard Filmore.” And second, these outrageous and scurrilous rumors border on libel, even if they are, technically, true.