Boot Liners - Series 3 Caterham. Caterham Boot Liners to fit the S3 Caterham Designed to prevent the dents and flaking paint caused by flying objects in the boot These boot liners are... 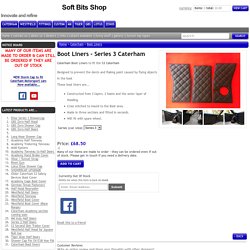 Constructed from 3 layers. 2 foams and the outer layer of Hooding. Cross stitched to mould to the Boot area. Caterham Seven - our guide to the roof and getting out with elegance. Anschluss Amperemeter. Es gibt Instrumente, die den vollen Ladestrom aufnehmen. 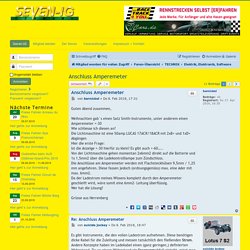 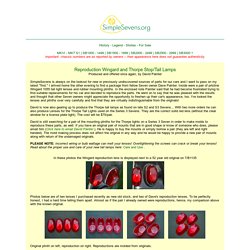 " I arrived home the other evening to find a package from fellow Seven owner Dave Painter. Inside were a pair of pristine Wingard 1055 tail light lenses and rubber mounting plinths. In the enclosed note Painter said that he had become frustrated trying to find suitable replacements for his car and decided to reproduce the parts. He went on to say that he was pleased with the results and thought that other Seven owners might appreciate the opportunity to freshen up their car's appearance, too. David is now also gearing up to produce the Thorpe tail lamps as found on late S2 and S3 Sevens...

Lotus Seven S2 1962. Rearaxle. The main weakness of the Seven S2 lay with the Standard 10 axle. 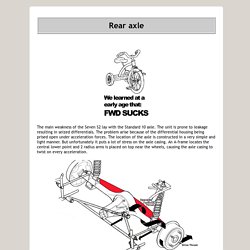 The unit is prone to leakage resulting in seized differentials. The problem arise because of the differential housing being prised open under acceleration forces. The location of the axle is constructed in a very simple and light manner. But unfortunately it puts a lot of stress on the axle casing. Certificate of Provenance. Certificate of Provenance. Throttle Cable - RHD - Twin Carbs. Air Cleaners for Weber Carburetors. Stacks for Weber Carburetors. NB Miata License Plate Bracket / Holder. Garage Star is the leading producer of the side mount or relocation license plate bracket / holder for the NA 1999-2005 Mazda Miata . 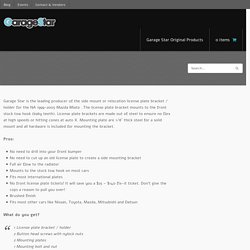 It will save you a $25 – $140 fix-it ticket. What do you get? 1 License plate bracket / holder 2 Button head screws with nylock nuts 2 Mounting plates 1 Mounting bolt and nut What does it look like? NB without fog lights Chris Ngo's NB without fog lights. Under Bumper Front License Plate Mount Bracket. Brake and Clutch Parts from Merlin Motorsport. SimpleSevens: Dann Shivley's Lotus Seven. A few additional photos as of February 2015... 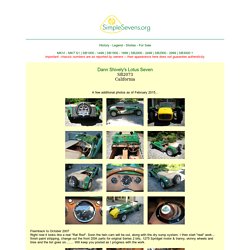 Flashback to October 2007 Right now it looks like a real "Rat Rod". Soon the twin cam will be out, along with the dry sump system. I then start "real" work... finish paint stripping, change out the front DSK parts for original Series 2 bits, 1275 Spridget motor & tranny, skinny wheels and tires and the list goes on........ Will keep you posted as I progress with the work. SB2073 was owned by my race car partner, Mike Ostrov, since the early 90's. January 2008 Talked to my local muffler guy and he says we can take a 3 " diameter glass pack apart and put it inside the big 3 inch side pipe, weld it up and the whole thing will look just like the photo. 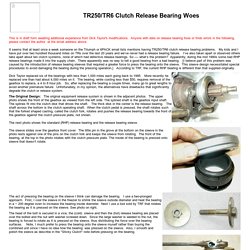 Anyone with data on release bearing fixes or finds errors in the following, please contact the author at the email address above. It seems that at least once a week someone on the Triumph or 6PACK email lists mentions having TR250/TR6 clutch release bearing problems. My kids and I have put over two hundred thousand miles on TRs over the last 20 years and we’ve never had a release bearing failure. I’ve also taken apart or observed others take apart about ten clutch systems, none of which had defective release bearings. So ---- what’s the problem? Smiths Rev Gauge Not Working - Problems, Questions and Technical - The Mini Forum. Classic & Vintage Car Parts from SVC - The Best Prices. 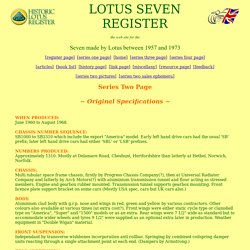 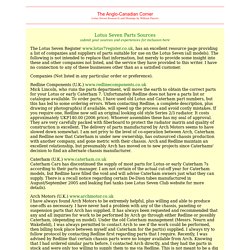 The following is not intended to replace that information, but merely to provide some insight into these and other companies not listed, and the service they have provided to this writer. I have no connection to any of these businesses other than as a satisfied customer. Companies (Not listed in any particular order or preference). Redline Components (U.K.) www.redlinecomponents.co.uk Mick Lincoln, who runs the parts department, will move the earth to obtain the correct parts for your Lotus or early Caterham 7. 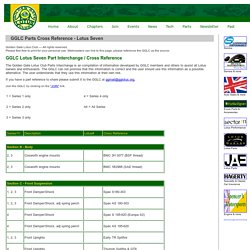 Webmasters can link to this page, please reference the GGLC as the source. The Golden Gate Lotus Club Parts Interchange is an compilation of information developed by GGLC members and others to assist all Lotus owners and enthusiasts. The GGLC can not promise that this information is correct and the user should use this information as a possible alternative. The user understands that they use this information at their own risk. If you have a part reference to share please submit it to the GGLC at ggmail@gglotus.org. 2LTR SQUARE OIL CATCH TANK, BULK HEAD MOUNT - Classic & Vintage Car Parts from SVC - The Best Prices. Brake Parts. Redline Components Ltd. - Lotus and Caterham Seven Authorised Spares, Repairs and Servicing. SimpleSevens: the Anglo-Canadian Corner. Lotus Seven Parts and Repair submit your experiences for inclusion here Fuel Filler Hose: I somehow misplaced the rubber fuel filler hose that connects between the metal fuel filler neck (with chrome gas cap attached) and the gas tank on my Series 3 Seven.

The car has been completely dismantled for longer than I care to admit, and I wanted to complete an inventory to see what parts would be required. I purchased a new hose from Redline, but on receipt of the part, it was noted that it was longer, had a smaller inside diameter, and was molded at a 45 degree angle. I am not sure if heating would correct the angle to 90 degrees as per the original as it may cause the rubber to crush in the middle when bent to a full 90.

SimpleSevens: Bob Herzog's ex-Lotus Seven. Full restoration. New Chassis. New aluminum skins. New interior. Fresh paint. Color is 1991 Lotus Esprit British Racing Green with a bright yellow stripe. Lotus seven rear axle. SimpleSevens: Renaud Richard's Lotus Seven. September 2006 Author's biographical notes: The reader can skip these next paragraphs which are pure biographical background of the present owner and has nothing to do with the car! In the sixties I was a teenager and following my father, impassioned by car mechanics. We were 2 stroke bike tuners, conceived and built our own karts were among the first licenced kart drivers and race organizers in France.

September 2005 The restoration is going on. Though I wanted to keep anything as original as possible I quickly realized last summer when I began to dismantle that I would have to "bin" nearly all the ali because of unwanted holes, dents, cracks etc. 1962 Lotus Seven Restoration. Thought I'd start a thread on the Seven I'm restoring, I bought it in the summer and am hoping to have it finished for next spring. As bought, it had been highly modified for racing in the past and been off the road since 1985. It came with a spare chassis which is fortunate as the original was past restoring, even the spare one needed a considerable amount of work.