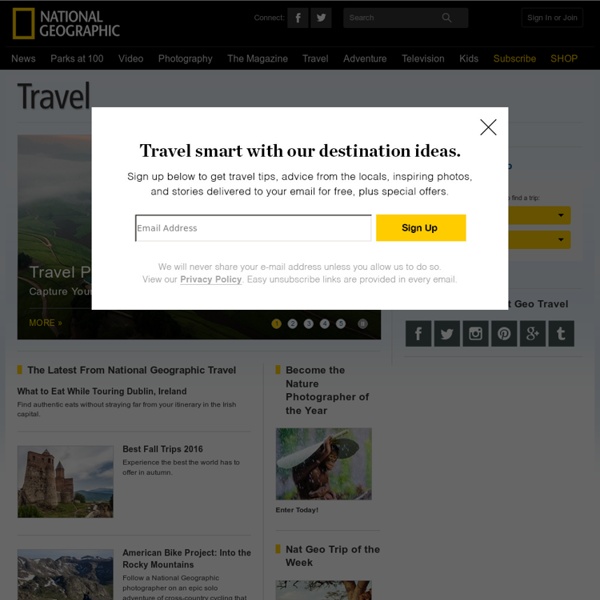 On the Road With National Geographic's Digital Nomad Follow Andrew Evans as he drives the entire length of Route 66, and then embarks on a series of other great American road trips across the country. I Heart My City: Sharada’s Hyderabad An insider gives her tips for the best things to do in the capital of Andhra Pradesh in southern India. Miami’s Enduring Heat The Miami of today may not look like any place my grandparents would recognize–at least from the outside. But Magic City’s big heart and carousing spirit are here to stay. Viva the Family Road Trip There are some key things you can do to make your next family road trip your best ever. Here are five to get you started.

Top 10 Civilizations That Mysteriously Disappeared Throughout our history, most civilizations have either met a slow demise or were wiped out by natural disasters or invasion. But there are a few societies whose disappearance has scholars truly stumped: 10. Japanese Museum Unveils A Giant Globe Made of 10,000 Live-Updating OLED... Geo-Cosmos If you want to see what Earth looks like from space, become an astronaut (or, barring that, a space tourist). For the next best view, pay a visit to Tokyo’s National Museum of Emerging Science and Innovation where a massive, nearly 20-foot spherical OLED orb--the world’s first large scale spherical OLED --offers a satellite’s-eye view of the planet in super high resolution. “Geo-Cosmos” is made up of 10,362 OLED panels that display continuously-updating satellite footage of our tiny blue marble, representing what our planet looks like from space in something close to realtime.

Fantasy Forest Tree House 8:57pm | Aug 21st, 2010 If this looks large to you, imagine how big it would seem to someone half your size or smaller. Like some childrens picture-book come to life, this ‘Enchanted Forest‘ wooden tree house may look a bit kitsch to us as adults from a design perspective – but for kids it is one very cool combination of fairy tale magic and real-life adventure. Held up by a combination of wooden beams and actual tree trunks, a spiral staircase connects this series of interdependent levels to effectively create a single (narrative) structure out of a number of semi-autonomous rooms and floors along the way. Each platform affords places to play as well as increasingly interesting views of the surrounding treescapes.

Tattoo Brighton About Tattoo Brighton: Tattoo Brighton. I have so much respect for people whose vanity is such that they would indelibly mark their skin just to look good. I like to look good. 30 Pictures Which Prove That We Live On A Gorgeous Planet Writen by Bogdan / Comments Off on 30 Pictures Which Prove That We Live On A Gorgeous Planet Earth is the third planet from the Sun and the densest and fifth-largest of the eight planets in the Solar System. It is also the largest of the Solar System’s four terrestrial planets. Greek Gods Family Tree / Genealogy ludios.org 20 Unique And Creative Ice Cube Trays EmailEmail Who said that ice cubes should be cube-shaped? Silicone ice cube trays can create any shape we want – from snowflakes to brains and guns. So, why not spice up your next party with one of these creative custom shaped ice cubes? 1. Lego Ice Cubes

Incredible Space Pics from ISS by NASA astronaut Wheelock Go Discovery! It was October 23, 2007 at 11:40am EST when I had my first ride to space on Discovery. She’s beautiful… just sad that this will be her last voyage. Infinity Pools Optical Illusions Explained Infinity pools are beautiful, when you are in and around them, they look like the water is endless, or as if it blends either with an infinite amount of water or the sky behind them. We have sketched how they really work; while your eyes are seeing a border of water that blends with the large amounts of water in the background or with the sky. The water at the far border of the pool, actually flows into a reservoir in the back which is pumped back into the pool. Visual representation above created with Google Sketchup.