Walking Holidays Austria & Alps. Walking Holidays in Italy, Austria, Spain with Collett's. Trekking & Walking Holidays, Cultural Tours & Holidays Worldwide. Scenic walks around North Berwick. The landmarks mentioned above can be identified on the bronze and stone direction plaque (right) erected at the summit in 1959 as a memorial to John Wallace Menzies, Town Clerk from 1926 until his death in 1956. 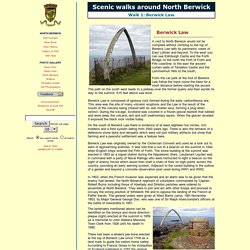 There has been a whale's jaw bone erected at the top of Berwick Law since 1709 as a land mark to guide the sailors home safely. According to Francis Grose in his Antiquities of Scotland published in 1797 the original jaw bones were replaced around 1789. They were renewed in the 1850s by landowner Sir Hew Hamilton-Dalrymple from an old Dunbar whale ship. In 1933 they were blown down and replaced two years later by a jaw bone taken from an Antartic whale, gifted by John Dunlop, the son of a North Berwick Town Councillor. In 1935 the jaw bone was brought to the town by railway wagon when it still had whale meat hanging from it.

A new whale bone made from fiberglass was lifted into position by helicopter on 26th June 2008. Scenic walks around North Berwick. Harbour to Fidra Island Start your walk at the harbour and proceed along the west beach where the golden sands lead to Pointgarry Rocks. 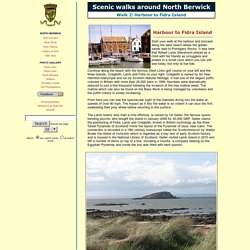 It was here that Robert Louis Stevenson played as a child with his friends as smugglers and pirates in a small cave which you can still see today, but only at low tide. Continue along the beach with the famous West Links golf course on your left and the three islands, Craigleith, Lamb and Fidra on your right. Craigleith is owned by Sir Hew Hamilton-Dalrymple and run by Scottish Natural Heritage. It had one of the largest puffin colonies in Britain with more than 28,000 pairs in 1999. From here you can see the spectacular sight of the Gannets diving into the water at speeds of over 90 mph. The Lamb Island, less than a mile offshore, is owned by Uri Geller, the famous spoon-bending psychic who bought the island in January 2009 for 30,000 GBP. Walking. East Lothian offers a great variety of landscapes for walking, with the Lammermuir Hills to the south, a coast of beaches and cliffs and an expanse of arable farmland in between. 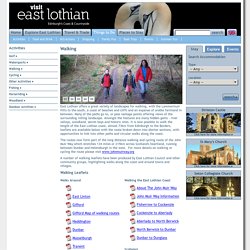 Many of the paths go to, or pass vantage points offering views of the surrounding rolling landscape. Amongst the features are many hidden gems - river valleys, woodland, secret bays and historic sites. It is now possible to walk the length of the East Lothian coast, almost 73km from Edinburgh to the Borders, leaflets are available below with the route broken down into shorter sections, with opportunities to link into other paths and circular walks along the coast.

The routes now form part of the long distance walking and cycling route of the John Muir Way which stretches 134 miles or 215km across Scotland's heartland, running between Dunbar and Helensburgh in the west. For more details on walking or cycling the route please visit www.johnmuirway.org. 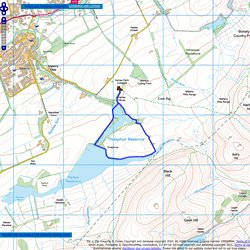 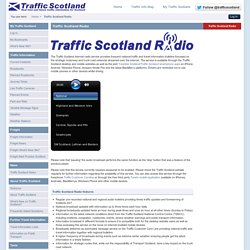 The service is available through the Traffic Scotland desktop and mobile websites as well as the joint Traveline Scotland/Traffic Scotland smartphone apps on iPhone, Android, Windows Phone, Amazon Kindle Fire and the latest BlackBerry platforms. Drivers are reminded not to use mobile phones or other devices whilst driving. Please note that 'pausing' the audio broadcast performs the same function as the 'stop' button that was a feature of the previous player. Please note that this service currently requires Javascript to be enabled. Please check the Traffic Scotland website regularly for further information regarding the availability of this service. Regular pre-recorded national and regional audio bulletins providing timely traffic updates and forewarning of incidents 24/7. Disclaimer.