Untitled. But while things have bumped along in the county, justice being served up in its usual imperfect way, chaos, rather than reform, has defined Gardner’s style. 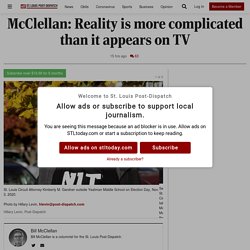 The old hands bailed or were shoved out. Several of these old hands were friends of mine. Despite that association, they were not bad people. More conservative than me, but hey, they were prosecutors. Actually, Gardner’s election seemed a remarkable experiment. Maybe this perspective is just what we need, many of us thought. That has not worked out. Untitled. Untitled. JEFFERSON CITY — As governor, Eric Greitens was a secretive chief executive who worked hard to manage his own narrative by avoiding the press and appearing only in controlled settings. 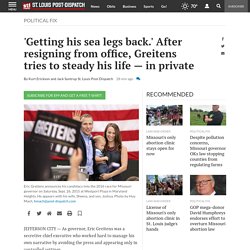 While that approach to governing melted under the heat of a scandal, it comes as no surprise the Republican has stayed off the radar in the year since he left office. No interviews. No public appearances. No news of his whereabouts. Is Eric Greitens planning another run for Missouri governor? This is going to shock you. 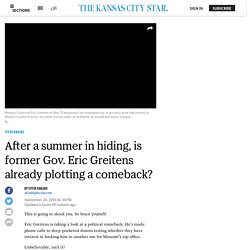 So brace yourself. The Lesson of Eric Greitens, and the Navy SEALs Who Tried to Warn Us. Don't 'equate my husband's political views with my own,' Sheena Greitens chides former friend. Sheena Greitens may be standing by her scandal-plagued husband, Republican Missouri Gov. 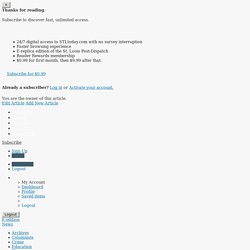 Eric Greitens. But a rare glimpse into the trans-Atlantic social circle of the publicity-shy First Lady indicates she doesn't stand by his conservative politics. Greitens' onetime vows of transparency now lost behind a veil of dark money. In January 2016, Eric Greitens, then one of a crowd of candidates seeking the Republican nomination for Missouri governor, vowed that the public would always know where his political funding was coming from. 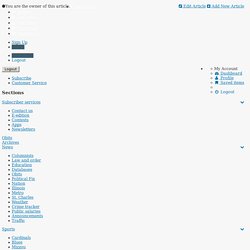 "The most important thing is that there is transparency around the money," Greitens told St. Louis Public Radio in an interview that month. "We've already seen other candidates set up these secretive super PACs where they don't take any responsibility for what they're funding ... because that's how the game has always been played.

" He added: "I've been very proud to tell people, 'I'm stepping forward, and you can see every single one of our donors.''" Sheena Chestnut Greitens strives to balance roles as professor, Missouri's first lady. COLUMBIA — Two posters hang side by side on the wall of Sheena Chestnut Greitens’ office — one declaring "Welcome to Pyongyang," the other commemorating North Korea’s missile program. 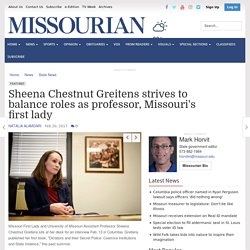 Behind her desk is a painting of women in military uniforms gathered around an issue of Workers’ Daily, a North Korean newspaper. Greitens’ decor illustrates her research specialties: East Asia and authoritarian regimes. In forming nonprofit, Greitens joins ranks of politicians with secretive funding source. JEFFERSON CITY • The creation of a nonprofit organization designed to promote Gov. 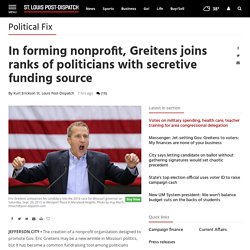 Eric Greitens may be a new wrinkle in Missouri politics, but it has become a common fundraising tool among politicians across the nation. Years before Greitens and his allies formed “A New Missouri” last month and opened an office in the capital city to collect money from undisclosed donors, Michigan Gov. Lawsuits and sex slaves — so much for post-primary unity in Missouri. ST. 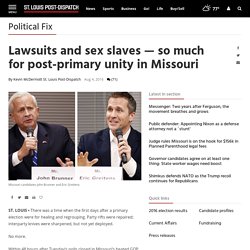 LOUIS • There was a time when the first days after a primary election were for healing and regrouping. Party rifts were repaired; interparty knives were sharpened, but not yet deployed. No more. Within 48 hours after Tuesday’s polls closed in Missouri’s heated GOP gubernatorial primaries, Republicans were back to infighting, and Democrats were on the attack. By Thursday afternoon: • A planned GOP unity rally that was to include all four Republican gubernatorial candidates was scuttled after second-place finisher John Brunner refused to participate. • State Democrats filed an ethics complaint against GOP nominee for governor Eric Greitens, modeled after a complaint that had been filed against him by fellow Republicans before the primary. • Brunner, in an attempt to mitigate a campaign-related defamation suit that has been filed against him, released a statement that illustrated how far the tenor of the campaign had fallen.

Loaded: 0% Progress: 0% STL Up Late Reveals What Eric Greitens Was Shooting at in That Campaign Ad. Click to enlarge YouTube Eric Christensen, host of STL Up Late, is ready to dig into Missouri politics. 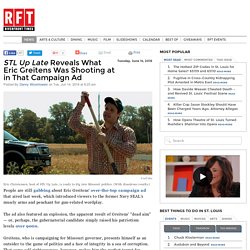 (With disastrous results.) People are still gabbing about Eric Greitens' over-the-top campaign ad that aired last week, which introduced viewers to the former Navy SEAL's muscly arms and penchant for gun-related wordplay. The ad also featured an explosion, the apparent result of Greitens' "dead aim" — or, perhaps, the gubernatorial candidate simply raised his patriotism levels over 9000. Governor candidate Greitens' oddly national funding base may hint at bigger goals. Why would scores of business tycoons from Manhattan to Silicon Valley lavish contributions of $50,000 or $100,000 or even $500,000 on a political novice running in a primary election for governor of a Midwestern state where none of them live? 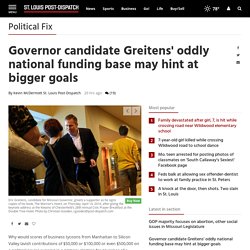 One clue might rest in the Web address “EricGreitensForPresident.com.” Eric Greitens reserved it himself. Seven years ago. Greitens, a Rhodes scholar and former Navy SEAL, is known for bringing high ambition to everything he’s done in his varied career. His first-ever political campaign, for the Republican nomination for Missouri governor, is apparently no different. Five months before the first votes will be cast in the state’s hotly contested four-way GOP gubernatorial primary, many of Greitens’ supporters — and apparently the candidate himself — already are looking beyond the governor’s mansion in Jefferson City. One political operative with knowledge of the Greitens campaign put it more bluntly. The reserved website isn’t the only hint. Loaded: 0% Eric Greitens Already Breaks His Own Promise. Former Navy SEAL: Why I am no longer a Democrat. I am a conservative Republican, but I didn’t start out that way.

I was raised as a Democrat. I was taught that Harry Truman was the greatest president ever because he was strong, stood up to the communists, and most important, he was from Missouri. I was taught to stand up for the little guy, and that bigger government was the best way to do that. I registered to vote as a Democrat, and several years ago some Democrats even tried to recruit me to run for Congress. There was one rather large problem.

After four tours of duty as a Navy SEAL officer, I came home from Iraq and watched the VA – the second-biggest bureaucracy in the country – fail my friends. I became a conservative because I believe that caring for people means more than just spending taxpayer money; it means delivering results. Eric Greitens: Lost in Republican-land - Occasional Planet. Many Missouri Democrats have been wondering about Eric Greitens—the former Navy SEAL who is considering running for Governor in 2016. A few years ago, when he emerged onto the political scene, he sounded pretty good, his values seemed right, and some people thought he could be a reasonable choice for U.S. Congress, or for Governor, on the Democratic ticket. But he’s not. As MO Governor, what would Eric Greitens value? - Occasional Planet.

Eric Greitens may run for Governor of Missouri on the Republican ticket: But which kind of Republican would he be? Greitens is one of the most intriguing and promising candidates that Missouri voters in general, and Republicans in specific, have come across in years. He has a resume that is the envy of anyone, particularly someone who wanted to run for political office. Greitens graduated from Duke University and went on to be a Rhodes Scholar. In 2001, he attended the Naval Officer Candidate School and is currently a lieutenant commander in the United States Navy Reserve. He was deployed four times to Iraq, Afghanistan, the Horn of Africa and Southeast Asia. This superintendent has figured out how to make school work for poor kids. Tiffany Anderson, the superintendent of the 3,000-student Jennings School District in Jennings, Mo., addresses college-prep students on Dec. 10.

Anderson has a "hands-on" approach and visits classrooms frequently. She has brought additional funding, initiative and momentum to the district. (Bonnie Jo Mount/The Washington Post) Missouri gubernatorial candidate Eric Greitens is a no-show in Lee’s Summit.