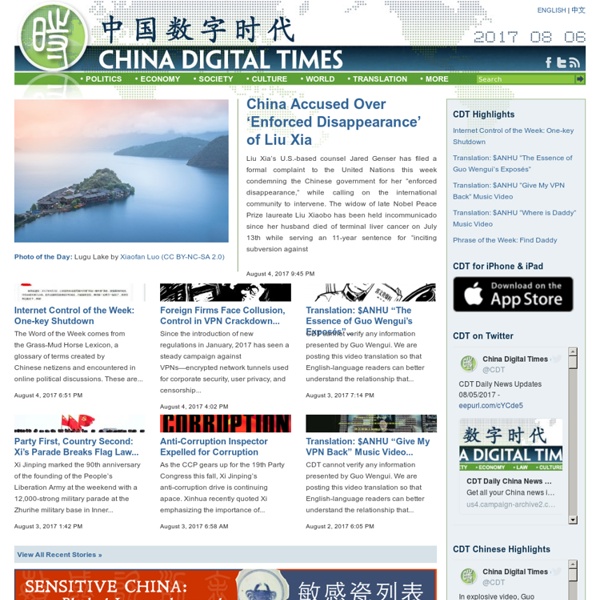 A week of legal proceedings against the New Citizens’ Movement rights and anti-corruption group culminated on Friday in the upholding of a four-year sentence against its founder, Xu Zhiyong. Xu was originally sentenced in January after being convicted of gathering a crowd to disturb public order. From Reuters’ Sui-Lee Wee: The ruling sparked fresh criticism from the United States, European Union and rights groups, though it had been expected as China’s

As Chinese Farmers Fight for Homes, Suicide Is Ultimate Protest Articles in this series look at how China’s government-driven effort to push the population to towns and cities is reshaping a nation that for millenniums has been defined by its rural life.点击查看本文中文版 | Read in Chinese » As she drove down a busy four-lane road near her old home, Tang Huiqing pointed to the property where her dead sister’s workshop once stood. The lot was desolate, but for Ms. Tang it lives.

China Twitter Accounts You Probably Already Follow, Schmuck At the end of every year, the meejah publish lists: what’s what, what’s hot, what’s not, what’s frot — y’know, “Top 10 Worst Celebrity Red Carpet Frock Horrors!” and other such high-water marks for journalism. But being lazy and living in China, we thought we’d wait until the end of the Dragon Year to do something similar. And seeing as we’re cheeky and crass, we thought we’d take a slightly different approach. So here it is, our list of the 28 China-related Twitter accounts that, indiscriminately chosen via no particular criteria, have earned a place in our Hall of Flame. This collection took about five minutes to compile, so please don’t feel offended if you’re not included.

Focus on Social Protection: Reducing Poverty and Inequality Social protection is a crucial tool for reducing poverty and inequality as well as accelerating prospects of long-term economic growth, says Sri Wening Handayani, Social Development Specialist at ADB. How effective are social protection systems in Asia and the Pacific? In general, the social protection systems operated by governments in the region are not terribly effective outside a few developed countries, such as Japan, Republic of South Korea, and Singapore. They tend to suffer from fragmentation, weak coordination, and poor beneficiary targeting. The spring migration Two panoramas from spring festival travels Two landscapes, courtesy of the iPhone's "panorama" function. One is a stretching maize field in Anhui province, among China's poorest and most historic rural settings.

France in America / La France en Amérique About the Project Conceived in partnership with France’s national library, the Bibliothèque nationale de France, France in America /France en Amérique is a bilingual digital library made available by the Library of Congress. It explores the history of the French presence in North America from the first decades of the 16th century to the end of the 19th century. Social Protection in Asia (SPA) SPA is a research, advocacy and network building programme which aims to overcome barriers to the extension of social protection to poor and marginalized groups in Asia. The programme seeks to identify and promote innovative forms of social protection which contribute to sustainable poverty reduction and development. SPA Research

French in Action Due to licensing agreements, online viewing of the videos for this resource is restricted to network connections in the United States and Canada. Orientation An introduction to French in Action: its creation, its components, and its functioning. How to work with the video programs and how to integrate them with the audio and print components. Liberty, Equality, Fraternity: Exploring the French Revolution Liberty, Equality, Fraternity: Exploring the French Revolution, With 12 Topical Essays, 250 Images, 350 Text Documents, 13 Songs, 13 Maps, a Timeline, and a Glossary. Explore Browse

Up to the minute Chinese news in Chinese and English. by nda_librarian May 7