Style Guide for Python Code. Learn Prolog Now! Extensible Markup Language (XML) 1.0 (Fifth Edition) 2 Documents [Definition: A data object is an XML document if it is well-formed, as defined in this specification. 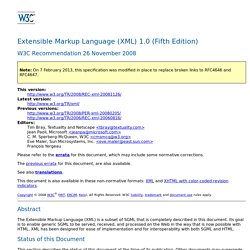 In addition, the XML document is valid if it meets certain further constraints.] Each XML document has both a logical and a physical structure. Physically, the document is composed of units called entities. An entity may refer to other entities to cause their inclusion in the document. 2.1 Well-Formed XML Documents [Definition: A textual object is a well-formed XML document if:] Taken as a whole, it matches the production labeled document.It meets all the well-formedness constraints given in this specification.Each of the parsed entities which is referenced directly or indirectly within the document is well-formed. Document Matching the document production implies that: It contains one or more elements. 2.2 Characters [Definition: A parsed entity contains text, a sequence of characters, which may represent markup or character data.] Character Range Note: White Space. TextBlob: Simplified Text Processing — TextBlob 0.9.0-dev documentation. 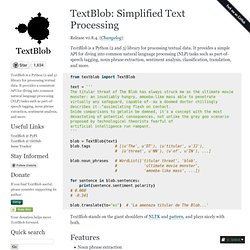 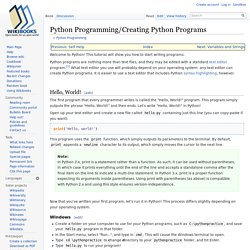 This tutorial will show you how to start writing programs. Python programs are nothing more than text files, and they may be edited with a standard text editor program.[1] What text editor you use will probably depend on your operating system: any text editor can create Python programs. It is easier to use a text editor that includes Python syntax highlighting, however. Hello, World! [edit] The first program that every programmer writes is called the "Hello, World!

" Open up your text editor and create a new file called hello.py containing just this line (you can copy-paste if you want): This program uses the print function, which simply outputs its parameters to the terminal. Now that you've written your first program, let's run it in Python! Windows[edit] Create a folder on your computer to use for your Python programs, such as C:\pythonpractice, and save your hello.py program in that folder.In the Start menu, select "Run Mac[edit] Linux[edit] Linux (advanced)[edit]

Rabbits Example. Welcome to schemers.org! Structure and Interpretation of Computer Programs. A powerful programming language is more than just a means for instructing a computer to perform tasks. 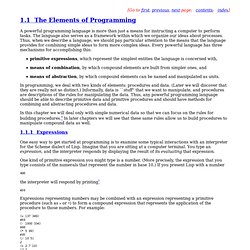 The language also serves as a framework within which we organize our ideas about processes. Thus, when we describe a language, we should pay particular attention to the means that the language provides for combining simple ideas to form more complex ideas. Every powerful language has three mechanisms for accomplishing this: primitive expressions, which represent the simplest entities the language is concerned with,means of combination, by which compound elements are built from simpler ones, andmeans of abstraction, by which compound elements can be named and manipulated as units. In programming, we deal with two kinds of elements: procedures and data. In this chapter we will deal only with simple numerical data so that we can focus on the rules for building procedures.4 In later chapters we will see that these same rules allow us to build procedures to manipulate compound data as well. 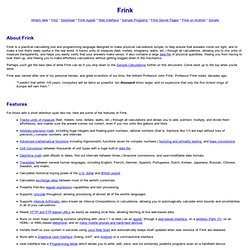 It tracks units of measure (feet, meters, kilograms, watts, etc.) through all calculations, allowing you to mix units of measure transparently, and helps you easily verify that your answers make sense. It also contains a large data file of physical quantities, freeing you from having to look them up, and freeing you to make effortless calculations without getting bogged down in the mechanics. Perhaps you'll get the best idea of what Frink can do if you skip down to the Sample Calculations further on this document. Frink was named after one of my personal heroes, and great scientists of our time, the brilliant Professor John Frink. 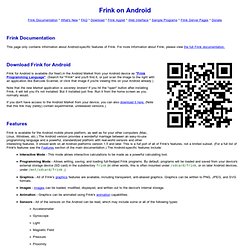 For more information about Frink, please view the full Frink documentation. Download Frink for Android Frink for Android is available (for free!) Note that the new Market application is severely broken! If you don't have access to the Android Market from your device, you can also download it here. Features. The Scheme Programming Language, 3rd Edition. Prolog Tutorial. Simple Scheme, for Android. I was on the train, wanted to write some code, and I though, "I wonder if there are any good Scheme implementations for my phone? 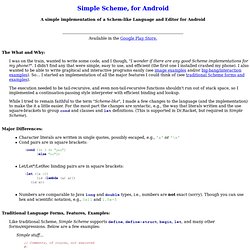 ". I didn't find any that were simple, easy to use, and efficient (the first one I installed crashed my phone). I also wanted to be able to write graphical and interactive programs easily (see image examples and/or big-bang/interaction examples). So... I started an implementation of all the major features I could think of (see traditional Scheme forms and examples). The execution needed to be tail-recursive, and even non-tail-recursive functions shouldn't run out of stack space, so I implemented a continuation-passing style interpreter with efficient binding and lookup. While I tried to remain faithful to the term "Scheme-like", I made a few changes to the language (and the implementation) to make the it a little easier. Frink. Home · nltk/nltk Wiki.