Why being bilingual helps keep your brain fit. Do bilinguals have different brains? 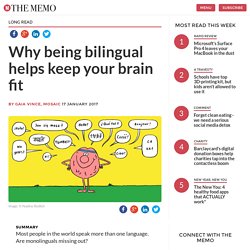 In fact, says cognitive neuropsychologist Jubin Abutalebi, at the University of San Raffaele in Milan, it is possible to distinguish bilingual people from monolinguals simply by looking at scans of their brains. “Bilingual people have significantly more grey matter than monolinguals in their anterior cingulate cortex, and that is because they are using it so much more often,” he says. The ACC is like a cognitive muscle, he adds: the more you use it, the stronger, bigger and more flexible it gets. Bilinguals, it turns out, exercise their executive control all the time because their two languages are constantly competing for attention.

Brain-imaging studies show that when a bilingual person is speaking in one language, their ACC is continually suppressing the urge to use words and grammar from their other language. Add These Skills to Your Resume Right Now. You know to include your experience, education, and even your awards on your résumé. 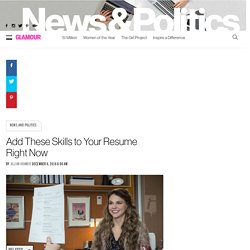 But, "it’s critical to push beyond just including what people might expect to see on our résumés because it helps us stand out from the pack," says Vicki Salemi, career expert for Monster and a former corporate recruiter. "We need to highlight our valuable skills others may not necessarily have, or know how to market," she continues. "We need to distinguish ourselves from the candidate pool—and by highlighting specific skill sets, we’re accomplishing just that. " The Global University Employability Ranking 2016. The idea of employability is full of paradoxes. 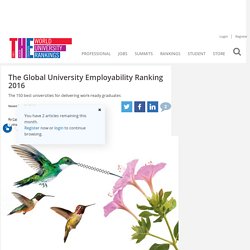 The most striking is that, while universities and employers agree that it’s increasingly important for graduates, there’s little agreement on what it means. The Technical University of Munich is the only institution outside the US, UK or Japan to make it into the top 10 in the new Global University Employability Survey, designed by French human resources company Emerging and published exclusively in Times Higher Education (see box below for details of the methodology). Wolfgang Herrmann, TUM’s president, credits this success to the deep relationships between the university and industry in Bavaria. The university’s academics also work for companies such as BMW, Siemens and Lindner, which gives students an immediate insight into the work environment. “There is no other technical university that has such a rich economic environment and especially a technical economic environment [as] we do here in Munich,” says Herrmann. The Best Languages to Learn in College.

For 8 years now, I’ve been running HUGS for THUGS / Enter to Grow in Wisdom, a sendoff event for rising Harvard freshmen. 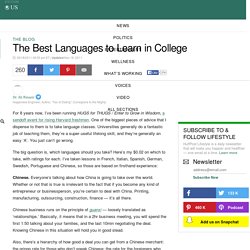 One of the biggest pieces of advice that I dispense to them is to take language classes. Universities generally do a fantastic job of teaching them, they’re a super-useful lifelong skill, and they’re generally an easy ‘A’. You just can’t go wrong. Language skills: way to get a job? With 48 applications for each graduate job vacancy and 2:1 degrees being handed out faster than free condoms at freshers' fair, it's no surprise that students are throwing themselves into internships and voluntary work. 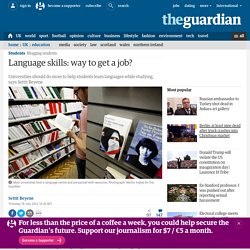 But given the lack of bilingual English graduates, is learning a language an alternative way to stand out? Log In. Bilingual Education: 6 Potential Brain Benefits : NPR Ed. Part of our ongoing series exploring how the U.S. can educate the nearly 5 million students who are learning English. 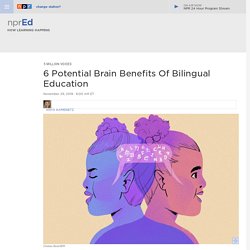 Brains, brains, brains. The 6 Biggest Benefits of Speaking More Than One Language. If you're bilingual, you've probably realized that it rocks. 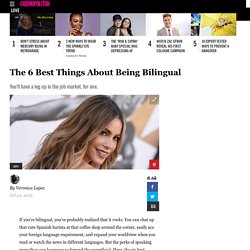 You can chat up that cute Spanish barista at that coffee shop around the corner, easily ace your foreign language requirement, and expand your worldview when you read or watch the news in different languages. But the perks of speaking more than one language go beyond the superficial. Here, the six best advantages to being multilingual. 1. Ñandutí >>Benefits of Early Learning. In 2009, foreign language instruction in public elementary schools had declined significantly. 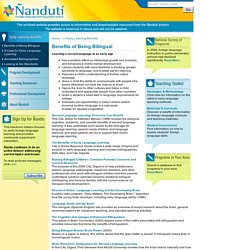 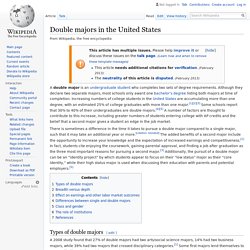 Although they declare two separate majors, most schools only award one bachelor’s degree listing both majors at time of completion. Increasing numbers of college students in the United States are accumulating more than one degree, with an estimated 25% of college graduates with more than one major.[1][2][3] Some schools report that 30% to 40% of their undergraduates are double majors.[4][5] A number of factors are thought to contribute to this increase, including greater numbers of students entering college with AP credits and the belief that a second major gives a student an edge in the job market. There is sometimes a difference in the time it takes to pursue a double major compared to a single major, such that it may take an additional year or more. Types of double majors[edit] Foreign LanguagesEconomicsBusinessEngineeringPolitical ScienceBiologyPsychologyEnglishHistoryMathematics References[edit]

Why Major in Linguistics? By Monica Macaulay and Kristen Syrett If you are considering becoming a linguistics major, you probably know something about the field of linguistics already. 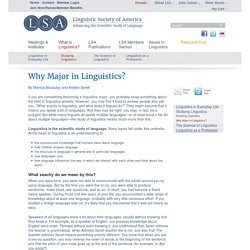 The Bilingual Graduate: The Benefits of Double Majoring with a Foreign Language Degree. When Kevin Newton was a freshman at William and Mary, he knew he wanted to major in history.