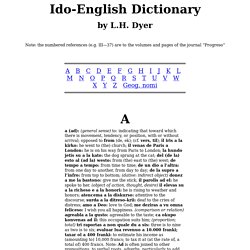 : egad! Plague on it! English-Ido Dictionary. Old Norse Online: Lesson 1. Viking Expansion Although the Scandinavians enter the records of Western Europe sometime around 790 AD, which therefore marks the beginning of the so-called 'Viking Age', these northern peoples had in fact begun a process of expansion some two or three generations before. 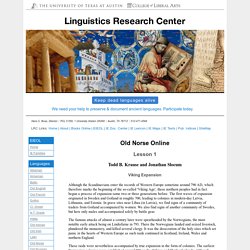 The first waves of expansion originated in Sweden and Gotland in roughly 700, leading to colonies in modern-day Latvia, Lithuania, and Estonia. In grave sites near Libau (in Latvia), we find signs of a community of traders from Gotland accompanied by women. We also find signs of another community of Swedes, but here only males and accompanied solely by battle gear. The famous attacks of almost a century later were spearheaded by the Norwegians, the most notable early attack being on Lindisfarne in 793. 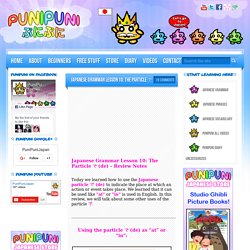 We learned that it can be used like “at” or “in” is used in English. In this review, we will talk about some other uses of the particle で. Using the particle で (de) as “at” or “in”: ★ The Japanese particle で (de) is used to indicate the place at which an action or event takes place. Subasub. Cours débutant - blog lca de la classe préparatoire littéraire d'enghien. IPA Phonetic Transcription of English Text. Subasub. History and traditions in Japan: 17 article constitution,3 imperial treasures,5 Japanese kings,7 fortune gods. Geography and travels in Japan: Aichi Prefecture,Aichi world exposition,Air Do,Aizu Castle,Akama Shrine,Akasaka palace,Akashi Bridge,Akashi strait,Akita city,Akita Prefecture. 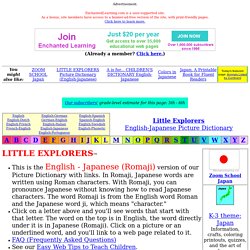 EnchantedLearning.com is a user-supported site. As a bonus, site members have access to a banner-ad-free version of the site, with print-friendly pages.Click here to learn more. (Already a member? Click here.) Handwritten kanji search at sljfaq.org. 植物園へようこそ！ Nagoya University Translated Information Archiving Database - Dictionary Search. Search. ライフサイエンス辞書. :<<>>: JAANUS :<<>>: Terminology of Japanese Architecture & Art History. 英語－日本語電気専門用語辞書 (An English-Japanese Dictionary of Electrical Engineering) Web Site. WishoTouch Japanese dictionary for iPhone/iPad. Have you ever wished that Japanese dictionaries were easier to use? 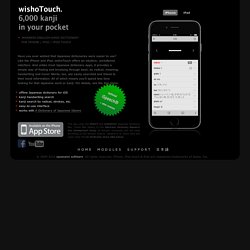 Like the iPhone and iPad, wishoTouch offers an intuitive, uncluttered interface. And unlike most Japanese dictionary apps, it provides a simple way of finding and browsing through kanji, by radical, meaning, handwriting and more! OJAD - Online Japanese Accent Dictionary. OJAD is an online Japanese accent database for learners and teachers of Japanese. 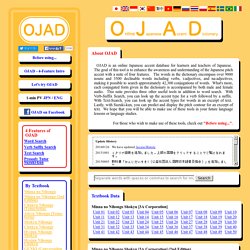 The goal of this tool is to enhance the awareness and understanding of the Japanese pitch accent with a suite of four features. The words in the dictionary encompass over 9000 nouns and 3500 declinable words including verbs, i-adjectives, and na-adjectives, making it possible to search approximately 42,300 conjugations of words. What's more, each conjugated form given in the dictionary is accompanied by both male and female audio. This suite provides three other useful tools in addition to word search. With Verb-Suffix Search, you can look up the accent type for a verb followed by a suffix. Wikiwand. Online Japanese Dictionaries and Glossaries. This page is a collection of annotated links to online Japanesedictionaries. 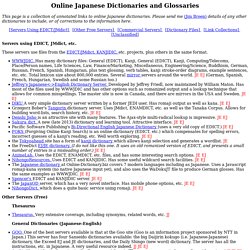 Please send me (Jim Breen) details of any other dictionaries to include, or of corrections to the information here. [Servers Using EDICT/JMdict] [Other Free Servers] [Commercial Servers] [Dictionary Files] [Link Collections] [Unclassified] Servers using EDICT, JMdict, etc. Esperanto Characters in Linux. Prior to the invention of the methods discussed in this post, the way to input Esperanto characters on Linux is to use the the h- or x-systems. 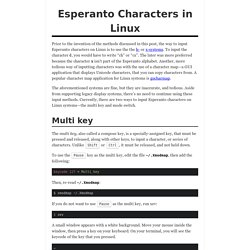 To input the character ĉ, you would have to write “ch” or “cx”. The later was more preferred because the character x isn’t part of the Esperanto alphabet. Another, more tedious way of inputting characters was with the use of a character map—a GUI application that displays Unicode characters, that you can copy characters from. A popular character map application for Linux systems is gucharmap. A language learners’ forum - Index page. LangParty - Language Exchange Community. SharedLingo - Language Exchange Chats. Radio Ambulante. LONWEB PARALLEL TEXTS ITALIAN - DAISY STORIES - THE SEARCH FOR LORNA. Short stories in English translated into many languages in a convenient parallel text format to help you learn them more quickly and easily. 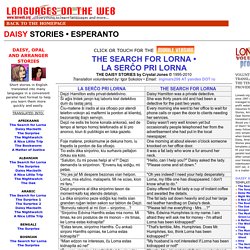 What Are The Hardest Languages To Learn? [INFOGRAPHIC] - Voxy Blog. Learning a new language can be difficult, but some languages can be trickier than others. 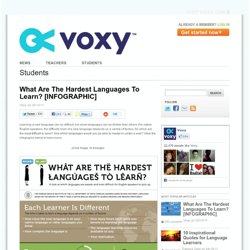 For native English speakers, the difficulty level of a new language depends on a variety of factors. So which are the most difficult to learn? And which languages would you be able to master in under a year? View the infographic below to learn more. (Click Image To Enlarge) Koi-nya - Noticias & reseñas otaku: manga-anime y videojuegos.