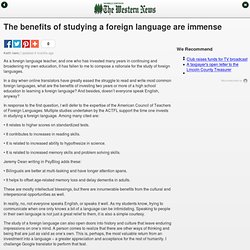 In a day when online translators have greatly eased the struggle to read and write most common foreign languages, what are the benefits of investing two years or more of a high school education to learning a foreign language? And besides, doesn’t everyone speak English, anyway? In response to the first question, I will defer to the expertise of the American Council of Teachers of Foreign Languages. Multiple studies undertaken by the ACTFL support the time one invests in studying a foreign language. Motivating Language Learners to Succeed. Sevtap Karaoglu points out the significant role that motivation plays in learning and provides suggestions for how to keep language learners motivated in the classroom. 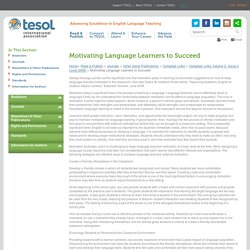 See also Debra W. Hawke's Portal article, "Improving Academic English at Outdoor Nature Centers," Essential Teacher, June 2008. Motivation plays a significant role in the process of learning a language. Language teachers cannot effectively teach a language if they do not understand the relationship between motivation and its effect on language acquisition. 10 Websites for Foreign Language Learning. 1- Memrise Memrise is an education website that will help you learn languages, history, science, math, geography, arts, and literature. 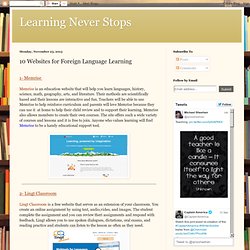 Hetain Patel: Who am I? Think again. Living la vida loca in the English-speaking world. Spanish for kids - Spanish with Judith. Can you learn Danish by osmosis? 20 September 2013Last updated at 20:22 ET By Emma Thomas Copenhagen "Self-pluck" strawberries, a book shop and boat tours Something all foreign correspondents know about is trying to pick up the local language. 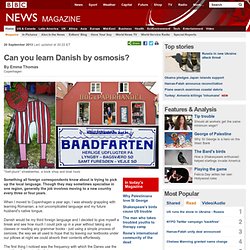 Though they may sometimes specialise in one region, generally the job involves moving to a new country every three or four years. Moving to the rhythm 'can help language skills' Moving in time to a steady beat is closely linked to better language skills, a study suggests. 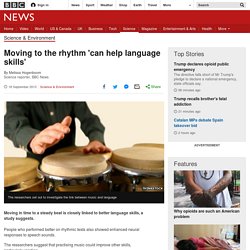 People who performed better on rhythmic tests also showed enhanced neural responses to speech sounds. The researchers suggest that practising music could improve other skills, particularly reading. In the Journal of Neuroscience, the authors argue that rhythm is an integral part of language. Not Hemingway's Spain: Spain's Friday the 13th: "Martes y 13..." Beginners’ Spanish: Food and drink. How we're herded by language. Here come the old metaphors again – and some new ones, too. 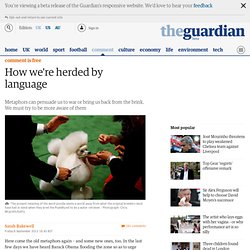 In the last few days we have heard Barack Obama flooding the zone so as to urge strikes in Syria, within time windows, but without boots on the ground, because of the crossing of a red line which, back in May, threatened to box in the president, or even turn into a green light for Bashar al-Assad, who himself says that "the Middle East is a powder keg, and today the fuse is getting shorter". John Kerry calls people who hesitate "armchair isolationists", which suggests useless snoozers by the fireside rather than thoughtful opponents.

Meanwhile, the media dubs France "America's poodle". So vivid are British memories of that taunt that the very thought of it may have accelerated the quick decision this time to reject military involvement. Metaphors are powerful. This is also the reason why talk of military "strikes" is significant. Why languages matter to me: Eddie Izzard, Alastair Campbell and more. Eddie Izzard, stand-up comedian, currently touring his show Force Majeure in a multiplicity of languages across the globe I describe my language ability in percentages of fluency. 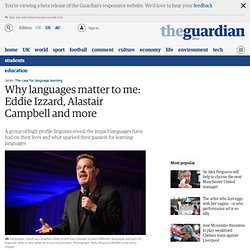 I'm about 65% fluent in French, 30% fluent in German, about half a percent fluent in Spanish. I'm already touring my show in French in France, and after that I'll be doing it in Spanish, then Russian, then Arabic. They say if you have French and English you should be speaking Spanish pretty well after a month of deep immersion. If I get stuck with a word or a phrase during a show I ask the audience, "How do you say such and such", and they help out. Alastair Campbell, communications supremo and former Labour spin doctor; studied French and German at university My dad comes from the Hebrides and his native language was Gaelic; he spoke no English until he went to school.

Foreign Language Group Speaking Activity : The Group Dynamic. This activity is a great way to get students speaking in pairs or small groups. 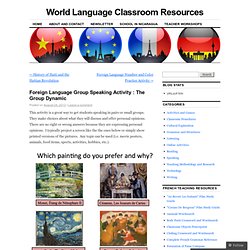 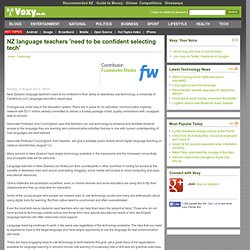 Changes are under way in the education system. Plans are in place for an education communication highway network with $211 million already committed to deliver a funded package of fast, quality connections with uncapped data to schools. 4 Activities To Effectively Teach Vocabulary. The Common Core Standards focus heavily on teaching a rich and varied vocabulary. It is expected that, in addition to teaching vocabulary through a wide reading of literature and informational texts, teachers will implement a rigorous program of vocabulary instruction. Here’s the secret: learning vocabulary is fun! If you vary your practices and strategies, you can engage students and help them develop their inner logophile. 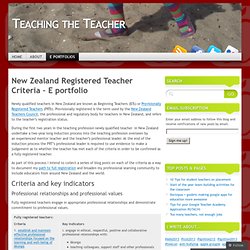 How the Brain Benefits From Being Bilingual. Never mind how well spoken you might be now, you will never again be as adept with languages as the day you were born. Indeed, the youngest person in any room is almost always the best linguist there too. There are 6,800 languages in the world, and since you can’t know where you’ll be born, you have to pop from the womb to be able to speak any one of them. That talent fades fast — as early as nine months after birth, some of our language synapses start getting pruned away. But well into your grammar-school years, your ability to learn a second — or third or fourth — language is still remarkable. That, it turns out, is very good for the brain. FLE - Le Café du FLE. Kató Lomb (née à Pécs le 8 février 1909 et morte à Budapest le 9 juin 2003) était une traductrice, linguiste et interprète hongroise.

Estallan los Sanfermines: Pamplona es una fiesta. Madrid: La ciudad entre ciudades. LA CIUDAD DE MADRID 1.mpg. Spanish. With tourism in Spain thriving, and the economic importance of Spanish growing in both Latin American and the United States, there has never been a better time to learn Spanish. Businesses operating in global markets in the future will need to rely more and more on Spanish language skills.