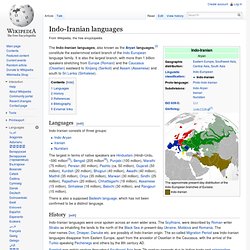 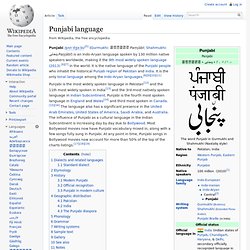 Bengali language. Bengali /bɛŋˈɡɔːli/[4] or Bangla /bɑːŋlɑː/ (বাংলা Bangla [ˈbaŋla] ( )) is the language native to the region of Bengal, which comprises present-day Bangladesh and the Indian states West Bengal, Tripura and southern Assam. 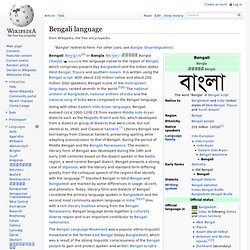 It is written using the Bengali script. With about 220 million native and about 250 million total speakers, Bengali is one of the most spoken languages, ranked seventh in the world.[5][6] The national anthem of Bangladesh, national anthem of India and the national song of India were composed in the Bengali language. History[edit] Like other Eastern Indo-Aryan languages, Bengali arose from eastern Middle Indo-Aryan dialects of Magadhi Prakrit and Pali.

Hindustani language. History[edit] Early forms of present day Hindustani emerged from the Middle Indo-Aryan apabhramsha vernaculars of North India in the 7th–13th centuries CE.[16] Amir Khusro, who lived in the 13th century CE during the Delhi Sultanate period in North India, used these forms (which was the lingua franca of the period) in his writings and referred to the language as Hindavi.[16] The Delhi Sultanate, which comprised several Turkic and Persian dynasties that ruled from Delhi, was succeeded by the Mughal Empire in 1526. 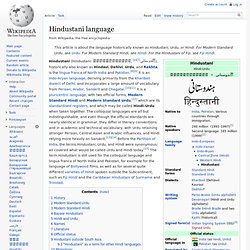 The phrase Zabān-e Urdu-e Mo'alla written in Nasta'liq calligraphy Although the Mughals were of Timurid (Gurkānī) Turko-Mongol descent,[17] they were Persianized, and Persian had gradually become the state language of the Mughal empire after Babur.[18][19][20][21] As an emerging common dialect, Hindustani absorbed large numbers of Persian, Arabic, and Turkic words, and as Mughal conquests grew it spread as a lingua franca across much of northern India. Modern Standard Urdu[edit] Rangpuri language. Rangpuri is an Indic language spoken by ten million Rajbongshi people in Bangladesh, five million in India, and 130,000 Rajbanshi and Tajpuria in Nepal. 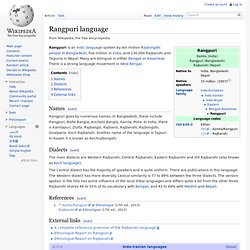 Many are bilingual in either Bengali or Assamese. There is a strong language movement in West Bengal. Names[edit] Rangpuri goes by numerous names. In Bangladesh, these include Rangpuri, Bahe Bangla, Anchalit Bangla, Kamta, Polia. Dialects[edit] The main dialects are Western Rajbanshi, Central Rajbanshi, Eastern Rajbanshi and Hill Rajbanshi (also known as Koch language). Sinhala language.

Sinhala has its own writing system, the Sinhala alphabet, which is a member of the Brahmic family of scripts, and a descendant of the ancient Indian Brahmi script. 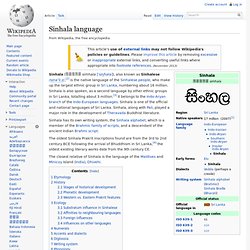 The oldest Sinhala Prakrit inscriptions found are from the 3rd to 2nd century BCE following the arrival of Bhuddhism in Sri Lanka,[4] the oldest existing literary works date from the 9th century CE. Rajasthani language. Rajasthani (Devanagari: राजस्थानी) is a language of the Indo-Aryan languages family. 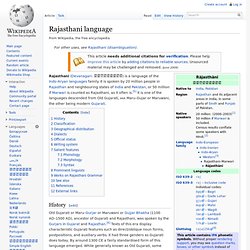 It is spoken by 20 million people in Rajasthan and neighbouring states of India and Pakistan, or 50 million if Marwari is counted as Rajasthani, as it often is.[5] It is one of the languages descended from Old Gujarati, AKA Maru-Gujar or Maruwani, the other being modern Gujarati. History[edit] Old Gujarati or Maru-Gurjar or Maruwani or Gujjar Bhakha (1100 AD–1500 AD), ancestor of Gujarati and Rajasthani, was spoken by the Gurjars in Gujarat and Rajasthan.[6] Texts of this era display characteristic Gujarati features such as direct/oblique noun forms, postpositions, and auxiliary verbs.

It had three genders as Gujarati does today, By around 1300 CE a fairly standardised form of this language emerged. While generally known as Old Gujarati, some scholars prefer the name of Old Western Rajasthani, based on the argument that Gujarati and Rajasthani were not distinct at the time. Chhattisgarhi language. Chhattisgarhi (Devanagari: छत्तीसगढ़ी) is the official language in the Indian state of Chhattisgarh, spoken by 17.5 million people.[1] It is an Eastern Hindi language with heavy vocabulary and linguistic features from Munda and Dravidian languages. 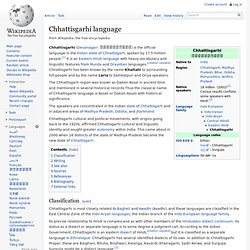 [citation needed] Chhattisgarhi has been known by the name Khaltahi to surrounding hill-people and by the name Laria to Sambalpuri and Oriya speakers. The Chhattisgarh region was known as Daksin Kosal in ancient time and mentioned in several historical records.Thus the classical name of Chhattisgarhi language is Kosali or Daksin Kosali with historical significance. The speakers are concentrated in the Indian state of Chhattisgarh and in adjacent areas of Madhya Pradesh, Odisha, and Jharkhand. Chhattisgarhi cultural and political movements, with origins going back to the 1920s, affirmed Chhattisgarhi cultural and linguistic identity and sought greater autonomy within India. Classification[edit] Writing[edit] See also[edit] Sources[edit] G. Marwari language. Awadhi language. Awadhi is also known by alternate names of Abadhi, Abadi, Abohi, Ambodhi, Avadhi, Baiswari, Kojali and Kosali. 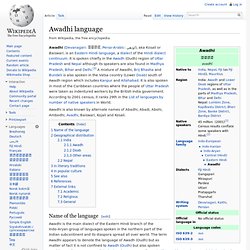 Name of the language[edit] Awadhi is the main dialect of the Eastern Hindi branch of the Indo-Aryan group of languages spoken in the northern part of the Indian subcontinent and its diaspora spread all over world. The term Awadhi appears to denote the language of Awadh (Oudh) but as matter of fact it is not confined to Awadh (Oudh) but also spoken outside Awadh e.g. Bhojpuri language. Bhojpuri (Devanagari: भोजपुरी listen ) is an Indo-Aryan language spoken in Bhojpuri region of North India and Nepal. 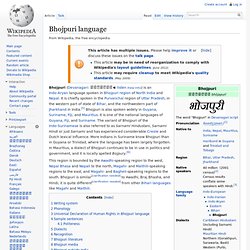 It is chiefly spoken in the Purvanchal region of Uttar Pradesh, in the western part of state of Bihar, and the northwestern part of Jharkhand in India.[5] Bhojpuri is also spoken widely in Guyana, Suriname, Fiji, and Mauritius. It is one of the national languages of Guyana, Fiji, and Suriname. The variant of Bhojpuri of the Indo-Surinamese is also referred to as Sarnami Hindustani, Sarnami Hindi or just Sarnami and has experienced considerable Creole and Dutch lexical influence.

More Indians in Suriname know Bhojpuri than in Guyana or Trinidad, where the language has been largely forgotten. Kurdish language. Gujarati language. Gujarati /ɡʊdʒəˈrɑːti/[4] (ગુજરાતી Gujarātī [ɡudʑəraːt̪i]) is an Indo-Aryan language native to the west Indian region of Gujarat. It is part of the greater Indo-European language family.

Gujarati is descended from Old Gujarati (c. 1100–1500 AD), which is also the ancestor of modern Rajasthani. Maithili language. In 2003, Maithili was included in the Eighth Schedule of the Indian Constitution, which allows the language to be used in education, government, and other official contexts. It is the second most spoken language of Nepal (at around 12%). Geographic distribution[edit] Unlike Bihar, where the major dialect spoken apart from Hindi, is Bhojpuri and forms of Maagdhi. Maithili in its modified forms is the second major language spoken in urban Jharkhand after Hindi. Maithili also is spoken in Bihar up to the Purnia, Munger and Bhagalpur districts parts of southeast Nepal.

Pashto language. Sindhi language. Sindhi /ˈsɪndi/[3] (سنڌي / सिन्धी / ) is the language of the historical Sindh region, spoken by the Sindhi people. It is the official language of the Pakistani province of Sindh.[4][5][6] In India, Sindhi is one of the scheduled languages officially recognized by the federal government. Abroad there are some 2.6 million Sindhis. Persian language. "Farsi" redirects here. For the village in Iran, see Farsi, Iran. Persian (/ˈpɜrʒən/ or /ˈpɜrʃən/; فارسی fārsi [fɒːɾˈsiː] ( )) is the predominant modern version of Old Persian, a southwestern Iranian language within the Indo-Iranian branch of the Indo-European languages. It is primarily spoken in Iran, Afghanistan (officially known as Dari since 1958 for political reasons),[7] and Tajikistan (officially known as Tajiki Persian since the Soviet era for political reasons),[8] and some other regions which historically came under Persian influence.