Which Are The Trendiest Programming Languages Of 2016? The trends in tech world evolve every year and it’s reflected in the choice of technologies used by people to get their work done. 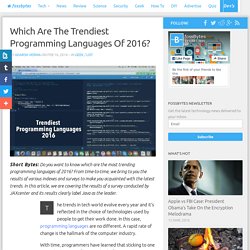 In this case, programming languages are no different. A rapid rate of change is the hallmark of the computer industry. With time, programmers have learned that sticking to one particular language, framework, platform, or operating system isn’t a guarantee of success. This has encouraged the young minds to take up new challenges and learn cutting-edge technologies. Felicity conditions. In J. 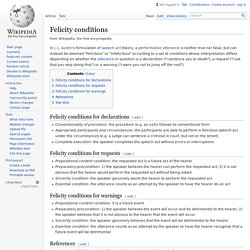 L. Austin's formulation of speech act theory, a performative utterance is neither true nor false, but can instead be deemed "felicitous" or "infelicitous" according to a set of conditions whose interpretation differs depending on whether the utterance in question is a declaration ("I sentence you to death"), a request ("I ask that you stop doing that") or a warning ("I warn you not to jump off the roof"). Felicity conditions for declarations[edit] Conventionality of procedure: the procedure (e.g. an oath) follows its conventional formAppropriate participants and circumstances: the participants are able to perform a felicitous speech act under the circumstances (e.g. a judge can sentence a criminal in court, but not on the street)Complete execution: the speaker completes the speech act without errors or interruptions Felicity conditions for requests[edit] 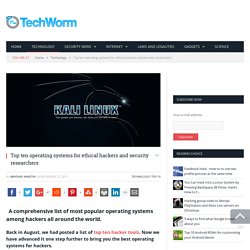 Back in August, we had posted a list of top ten hacker tools. Now we have advanced it one step further to bring you the best operating systems for hackers. This time it is about operating systems, which have almost every necessary tool provided within. A Lazy Programmer Wrote These "Hacker Scripts" To Secretly Get His Jobs Done. When you’ve got some great programming skills, why not utilize them? 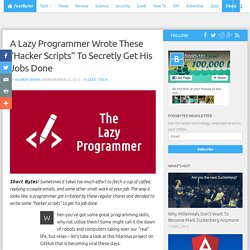 Some might call it the dawn of robots and computers taking over our “real” life, but relax – let’s take a look at this hilarious project on GitHub that is becoming viral these days. Shared by a programmer named Nihad Abbasov, who codes with the name “Narkoz” on GitHub, the project named “hacker scripts” has some software scripts with funny and NSFW names.

Narkov writes that the names of the scripts came from his former co-worker who would write a program for anything that needed more than 90 seconds of his time. After his co-worker left the job, the other people at job looked at his work and discovered that he had automated tons of things, including coffee-making, dealing with relationships, bits of his job, and more. Narkov has shared the lazy programmer’s “legacy” on GitHub. This script was probably for his wife to send a text message “late at work”. The lazy programmer scanned the inbox for emails from Mr. 15 programming languages you need to know in 2015. If you're a programmer, these are good times. 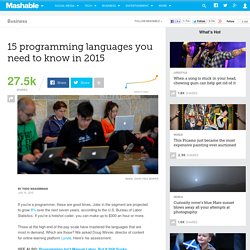 Jobs in the segment are projected to grow 8% over the next seven years, according to the U.S. Bureau of Labor Statistics. Scripting Languages You May Not Know. Scripting languages are used in everything from games and Web pages to operating-system shells and general applications, as well as standalone scripts. 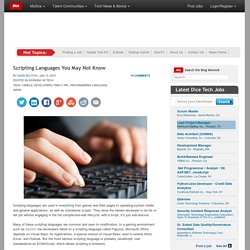 They allow the harried developer to do his or her job without engaging in the full compile-test-edit lifecycle; with a script, it’s just edit-and-run. Many of these scripting languages are common and open to modification. In a gaming environment such as Skyrim, the developers relied on a scripting language called Papyrus; Microsoft Office depends on Visual Basic for Applications, a special version of Visual Basic used to extend Word, Excel, and Outlook. But the most famous scripting language is probably JavaScript, now standardized as ECMAScript, which allows scripting in browsers. 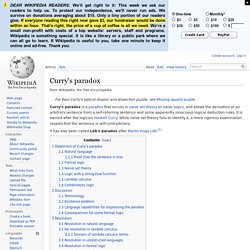 It is named after the logician Haskell Curry. While naive set theory fails to identify it, a more rigorous examination reveals that the sentence is self-contradictory. It has also been called Löb's paradox after Martin Hugo Löb.[1] Statement of Curry's paradox[edit] The Paradox may be expressed in natural language and in various mathematical languages; Natural languageFormal logicSet theoryLogic with a string Eval functionLambda calculusCombinatory logic Natural language[edit] Claims of the form "if A, then B" are called conditional claims. If this sentence is true, then Germany borders China. Even though Germany does not border China, the example sentence certainly is a natural-language sentence, and so the truth of that sentence can be analyzed. 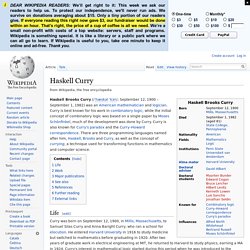 He entered Harvard University in 1916 to study medicine but switched to mathematics before graduating in 1920. After two years of graduate work in electrical engineering at MIT, he returned to Harvard to study physics, earning a MA in 1924. Haskell. Haskell may refer to: Haskell is one of several locations in the United States: 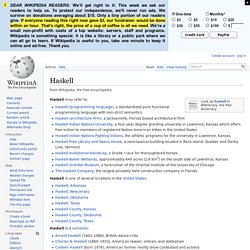 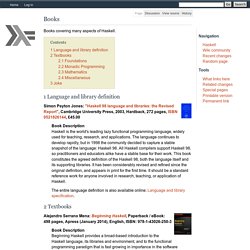 Wiki ▸ Gallery Welcome to the D3 gallery! More examples are available for forking on Observable; see D3’s profile and the visualization collection. Please share your work on Observable, or tweet us a link! Visual Index Basic Charts. Boo. Boo is an onomatopoeic word for a loud, startling sound, as an exclamation intended to scare, or as a call of derision (see booing).

Boo or BOO may also refer to: Places[edit] Film and television[edit] Music[edit]