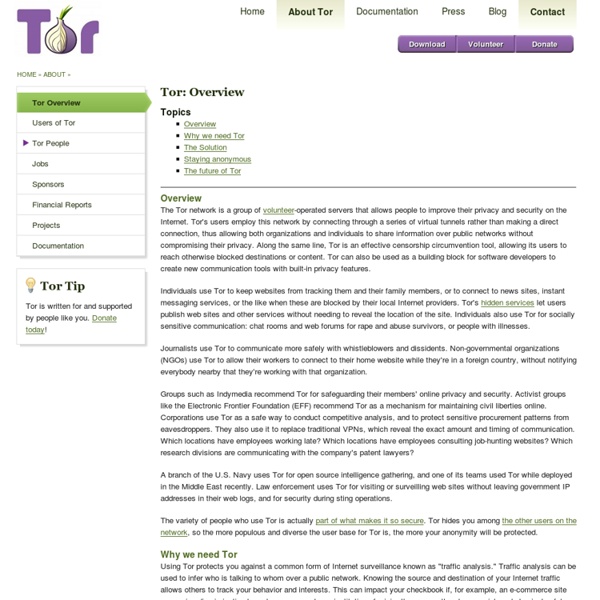 Overview The Tor network is a group of volunteer-operated servers that allows people to improve their privacy and security on the Internet. Tor's users employ this network by connecting through a series of virtual tunnels rather than making a direct connection, thus allowing both organizations and individuals to share information over public networks without compromising their privacy. Along the same line, Tor is an effective censorship circumvention tool, allowing its users to reach otherwise blocked destinations or content. Tor can also be used as a building block for software developers to create new communication tools with built-in privacy features. Individuals use Tor to keep websites from tracking them and their family members, or to connect to news sites, instant messaging services, or the like when these are blocked by their local Internet providers. Journalists use Tor to communicate more safely with whistleblowers and dissidents. A branch of the U.S. Why we need Tor

Instapaper’s (anti-)social network Ben Brooks noticed and blogged about how Instapaper’s social features, introduced earlier this year, are minimal: There’s just a list of articles that people you chose to follow decided that they liked. All without knowing who, or if, anybody will ever see that they liked that article. That was exactly the idea, and I’m very happy to see it perceived that way. Social features are tricky. Social networks also need to address difficult issues with identity, privacy, harassment, spam, and information overload. These systems require a lot of time and money to develop, maintain, and support. With Instapaper’s following system, I wanted to deal with as little of the difficult baggage as possible, even if it meant omitting some of the “sticky” social dynamics that can significantly boost user counts and engagement. There are no public usernames, avatars, or profile pages. There are no notifications whatsoever for following and unfollowing.

Download Tor Tor Browser Version 4.5.2 - Windows 8, 7, Vista, and XP Everything you need to safely browse the Internet. Learn more » Expert Bundle Windows 8, 7, Vista, XP, 2000, 2003 Server, ME, and Windows 98SE Contains just Tor and nothing else. Version 4.5.2 - OS X Intel Everything you need to safely browse the Internet. Version 4.5.2 - Linux, BSD, and Unix Tor (standalone) Install the Tor components yourself, run a relay, create custom configurations. Source Tarball Configure with: . The current stable version of Tor is 0.2.6.9. The current unstable/alpha version of Tor is 0.2.7.1-alpha. Want Tor to really work? You need to change some of your habits, as some things won't work exactly as you are used to. Use the Tor Browser Tor does not protect all of your computer's Internet traffic when you run it. Be smart and learn more.

Multi-tenancy in the cloud: Why it matters Whether an IT organization is going with public or private clouds, it's important to understand the nuances of multi-tenant architecture. For public clouds, IT managers need to understand the degree of multi-tenancy supported by whichever vendor they are looking at. For private clouds, the entire responsibility of designing a multi-tenant architecture rests with the IT managers. Enterprise cloud adoption has gone beyond the levels of intellectual pursuits and casual experimentation. None of that is to say that there aren't nagging issues, including but not limited to how different enterprise workloads match up against different types of clouds and responsible ways to plan and implement the necessary migrations. Based on the characteristics of the workload, cloud adoption will swing between public and private clouds. Besides appropriate workload distribution, architectural considerations are also key. Multi-tenancy defined Degrees of multi-tenancy How to choose your multi-tenancy degree

A Case for Pseudonyms pseu·do·nym [sood-n-im] –noun a fictitious name used by an author to conceal his or her identity; pen name. There are myriad reasons why individuals may wish to use a name other than the one they were born with. They may be concerned about threats to their lives or livelihoods, or they may risk political or economic retribution. They may wish to prevent discrimination or they may use a name that’s easier to pronounce or spell in a given culture. Online, the reasons multiply. Pseudonymous speech has played a critical role throughout history as well. A new debate around pseudonymity on online platforms has arisen as a result of the identification policy of Google+, which requires users to identify by "the name your friends, family, or co-workers usually call you". While these arguments are not entirely without merit, they misframe the problem. There are myriad reasons why an individual may feel safer identifying under a name other than their birth name.

‘Decoding the Renaissance,’ at the Folger Shakespeare Photo WASHINGTON — The Sigaba encryption machine squats in the Folger Shakespeare Library here like a thuggish interloper. Used by the American military in the 1940s and 1950s to send coded messages, it looks like an oversize, boxy typewriter with rotors rising above the lid like a mechanical brain. No object could seem less Elizabethan, yet appearances deceive. “Decoding the Renaissance: 500 Years of Codes and Ciphers,” an exhibition that runs through Feb. 26, draws a straight line from the cipher discs devised by the humanist polymath Leon Battista Alberti in the 1460s and Francis Bacon’s discovery of bilateral ciphers — a way of writing coded messages with just two letters — to Sigaba, the American answer to the German Enigma machine. It’s a rather fashionable subject at the moment. Together, the Folger Library and the Library of Congress, a major lender to the exhibition, hold one of the world’s deepest collections of works on cryptography. Mr. Mr. Mr.

Sexual Activity Tracked By Fitbit Shows Up In Google Search Results Yikes. Users of fitness and calorie tracker Fitbit may need to be more careful when creating a profile on the site. The sexual activity of many of the users of the company’s tracker and online platform can be found in Google Search results, meaning that these users’ profiles are public and searchable. You can click here to access these results. As you may know, the Fitbit Tracker is an compact wearable device that clips onto clothing or slips into a pocket and captures, through accelerometer technology, information about daily health activities, such as steps taken, distance traveled, calories burned, exercise intensity levels and sleep quality. So why are Fitbit users’ profiles able to be searchable in Google? So these users may be unwittingly sharing their most intimate details (i.e. kissing, hugging and more) when recording their sexual activity to calculate how many calories they have burned in a given period of time. Thanks to Andy Baio for the tip.

TigerText Disposes Of ‘Sender’s Remorse’ With New Privacy And Control Features For SMS TigerText, a company that adds a bevy of privacy settings and controls to SMS, is today launching a new app for iOS that aims to preserve the social nature of group messaging while giving the sender complete control over their messages both in group and one-to-one conversations. A prized feature of TigerText’s service has been the fact that it allows a sender to recall a message they’ve sent at any time. Bad for TextsFromLastNight. Other features of its new app include allowing the user to determine who receives the message, augmented privacy by using a TigerText specific user name (not based on a phone number), as well as confirmation of message delivery. TigerText’s core belief is that social sharing should be possible without sacrificing privacy, and that individual control should be key to the text messaging experience. The new TigerText iOS app is compatible with iPhone 4, iPhone 3GS, iPhone 3G, iPad and iPod Touch and is available free on the app store and at TigerText.com.

Policy Announcement: Strengthen... by Marc Bodnick - Quora We are publishing today a revised and simplified policy on individuals that strengthens the policy's protections. The new policy reaffirms the two core protections that Quora has offered individuals since we published the original policy in June 2010: Questions about people that are clearly hurtful or mean-spirited, or are likely to make the person uncomfortable, aren't allowed.For all Quora users, if there is a question about you on the site, then you have control over that question. This means that with regard to that question, you can privately ask Quora moderation to delete the question or individual answers or comments that you don't like. And you can have final say over the contents of the answer summary wiki.Our revised policy makes it clear that these protections apply to all Quora users, regardless of whether or not they are public figures. This policy change means that Quora moderation will no longer have to make distinctions about who is and who isn't a "public figure."