S.M.A.R.T. skyscraper constructed by futuristic robot bees. If the S.M.A.R.T. tower appears to be in constant motion, it’s only because the structure is covered by a swarm of 100,000 robot bees. 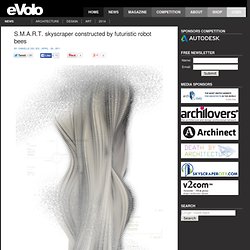 S.M.A.R.T. stands for Swarm Manufacturing and Augmented Reality Technology. Using CAD and LPS (Local Positioning System) data, the bees can be programmed to augment the structure virtually, turning virtual information and data into physical realities. The concept is the vision of Seoul, Korea architects Yoon H. Kim and Yang-Kyu Han. These bees aren’t interested in honey: these workers will actually build a structure. Self Organizing Cont. Self Organizing. Proto-Architecture. Project by Shih-Yuan Wang done with Processing The use of digital tools for architectural production is no longer a question and the impact of the digital on form-finding in architecture has been conspicuous. 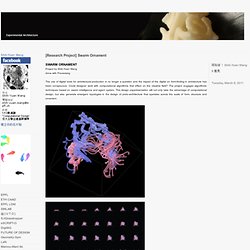 Could designer work with computational algorithms that effect on the creative field? Spherical Aggregation System. Oh no more Processing! « evilpaul.org. I was discussing Flight404‘s flow field simulation experiments with Roxlu yesterday and I realised that I’d never actually tried to recreate the effect myself. 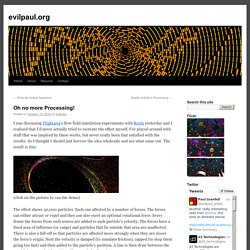 I’ve played around with stuff that was inspired by these works, but never really been that satisfied with the results. Trees cocooned by spiders could reduce malaria risk. Seil Collins, reporter (Image: Russell Watkins/DFID) Covered in spiders' webs, these cocooned trees in Sindh, Pakistan, are an unexpected result of floods that hit the region in 2010. 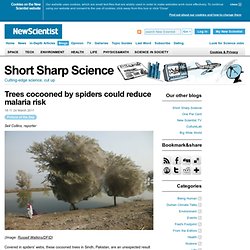 To escape from the rising waters, millions of spiders crawled up into trees. The scale of the flooding and the slow rate at which the waters receded, have left many trees completely enveloped in spiders' webs. Although slowly killing the trees, the phenomenon is seemingly helping the local population. The use of Swarm Intelligence to generate architectural form. Swarm modelling. 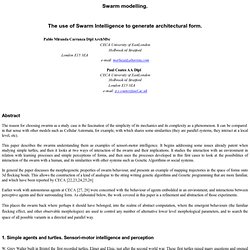 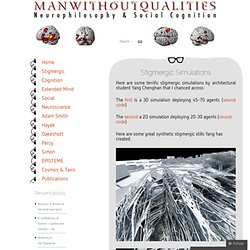 Stigmergy. Stigmergy is a mechanism of indirect coordination between agents or actions.[1] The principle is that the trace left in the environment by an action stimulates the performance of a next action, by the same or a different agent. 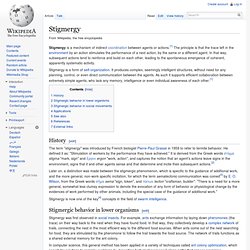 In that way, subsequent actions tend to reinforce and build on each other, leading to the spontaneous emergence of coherent, apparently systematic activity. Stigmergy is a form of self-organization. It produces complex, seemingly intelligent structures, without need for any planning, control, or even direct communication between the agents. As such it supports efficient collaboration between extremely simple agents, who lack any memory, intelligence or even individual awareness of each other.[1] History[edit] 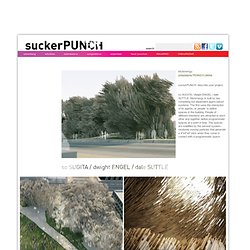 The first uses the interaction of its agents, or people, to define spaces in the building. People of different intentions are attracted to each other and together define programmatic spaces at a point in time. The spaces are solidified by the second system– randomly moving particles that generate a 4″x4″x6′ stick when they come in contact with a programmatic space. Single sticks can be removed by the people, but as the number of sticks increases, together they are able to interfere with the movement of the people agents and permanently define a wall or floor. sP: what or who influenced this project? dS: Cecil Balmond, Roland Snooks, Agent-based Design, Stigmergy, Swarms, Self-organization, Network theory, Systems theory. sP: what were you reading/listening to/watching while developing this project? 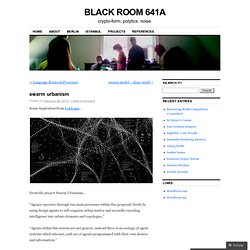 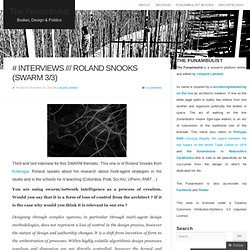 This one is of Roland Snooks from Kokkugia. Roland speaks about his research about multi-agent strategies in his studio and in the schools he is teaching (Columbia, Pratt, Sci-Arc, UPenn, RMIT…) You are using swarm/network intelligence as a process of creation. Swarms of fish off coast of Acapulco caused by tsunami? By Daily Mail Reporter Updated: 14:26 GMT, 14 March 2011 The shores of Acapulco's beaches were this weekend teeming with masses of fish packed so tightly they looked like an oil slick from above. Thousands of sardines, anchovies, stripped bass and mackerel surged along the coast of the Mexican resort in an event believed to be linked to the devastating Japanese tsunami. Delighted fishermen rushed out in wooden motor boats, abandoning their rods and nets and simply scooping the fish up with buckets.