Machine learning. Big data. Segmentation (image processing) In computer vision, image segmentation is the process of partitioning a digital image into multiple segments. The goal of segmentation is to simplify and/or change the representation of an image into something that is more meaningful and easier to analyze. Image segmentation is typically used to locate objects and boundaries in images. More precisely, image segmentation is the process of assigning a label to every pixel in an image such that pixels with the same label share certain visual characteristics. Music and Computers. Here’s a simplified view of what happens when we pluck a string: at first the string is highly energized and it vibrates like mad, creating a fairly complex (meaning rich in harmonics) sound wave whose fundamental frequency is determined by the mass and tension of the string. 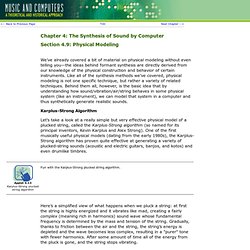 Gradually, thanks to friction between the air and the string, the string’s energy is depleted and the wave becomes less complex, resulting in a "purer" tone with fewer harmonics. After some amount of time all of the energy from the pluck is gone, and the string stops vibrating. If you have access to a stringed instrument, particularly one with some very low notes, give one of the strings a good pluck and see if you can see and hear what’s happening per the description above. A Simple and Efficient FFT Implementation in C++:<br> Part I.

Fun With Markov Chains. I am often asked about my message signature, which has been appearing at the bottom of email and Usenet postings for years now: "And Aholibamah bare Jeush, and Jaalam, and Korah: these were the borogoves... 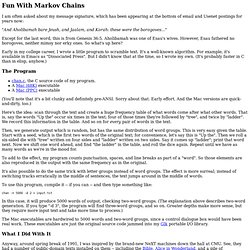 " Except for the last word, this is from Genesis 36:5. Aholibamah was one of Esau's wives. However, Esau fathered no borogoves, neither mimsy nor erky ones. So what's up here? Early in my college career, I wrote a little program to scramble text. The Program chan.c, the C source code of my program. Here's the idea: scan through the text and create a huge frequency table of what words come after what other words. Then, we generate output which is random, but has the same distribution of word groups. The Constructive Aspect of Visual Perception. A Gestalt Field Theory Principle of Visual Reification Suggests a Phase Conjugate Mirror Principle of Perceptual Computation Introduction There are many aspects of sensory and perceptual experience that exhibit a continuous spatial nature suggestive of a field theory principle of computation and/or representation in the brain. 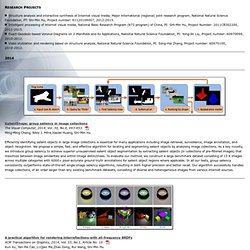 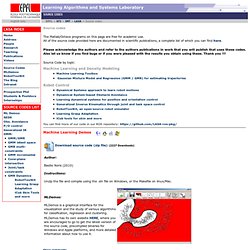 References: S.M. Obstacle avoidance is a classical problem in robotics and many approaches have been proposed to solve it. 1) it guarantees the safe collision avoidance. 2) As it only requires the differentiability of the original DS, it can be applied on a large set of DS including locally and globally asymptotically stable DS, autonomous and non-autonomous DS, limit cycles, unstable DS, etc. 3) It does not modify the critical points of the original DS. If the original DS is modeled with SEDS, the modulated DS is inherently robust to perturbations, and can instantly adapt its motion to a dynamically changing environment. Mathgen: Randomly generated math papers. Juergen Schmidhuber's home page - Universal Artificial Intelligence - New AI - Recurrent neural networks - Goedel Machine - Theory of everything - Algorithmic theory of everything - Computable universe - Zuse's thesis - Universal learning algorithms - Uni. Particle Filter Demo in Processing. 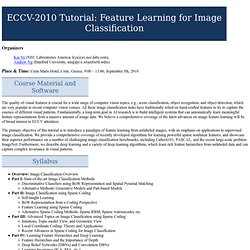