In the race to build the best artificial intelligence, there's already one clear winner — Quartz. The US government does a good job of reminding passengers that their Second Amendment rights don’t fly on airplanes. 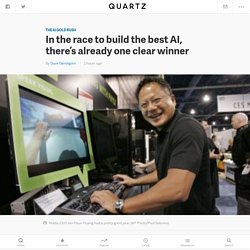 Obama promises retaliation against Russia over hacking during US election. Barack Obama has warned that the US will retaliate for Russian cyberattacks during the presidential election. 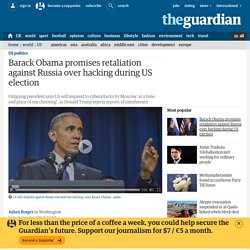 According to extracts of an interview due to air on National Public Radio on Friday morning, the US president said he was waiting for a final report he has ordered into a range of Russian hacking attacks, but promised there would be a response. “I think there is no doubt that when any foreign government tries to impact the integrity of our elections … we need to take action,” Obama said. New robot has a human touch. Most robots achieve grasping and tactile sensing through motorized means, which can be excessively bulky and rigid. 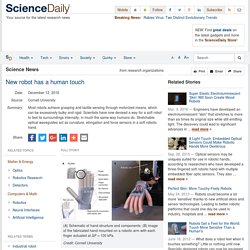 A Cornell University group has devised a way for a soft robot to feel its surroundings internally, in much the same way humans do. A group led by Robert Shepherd, assistant professor of mechanical and aerospace engineering and principal investigator of Organic Robotics Lab, has published a paper describing how stretchable optical waveguides act as curvature, elongation and force sensors in a soft robotic hand. Doctoral student Huichan Zhao is lead author of "Optoelectronically Innervated Soft Prosthetic Hand via Stretchable Optical Waveguides," which is featured in the debut edition of Science Robotics. Why the United Nations Must Move Forward With a Killer Robots Ban. This is a guest post. 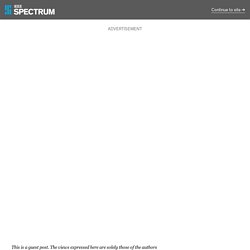 The views expressed here are solely those of the authors and do not represent positions of IEEE Spectrum or the IEEE. Killer robots are on the agenda of a major United Nations meeting in Geneva this week. Last July, thousands of researchers working in AI and robotics came together and issued an open letter calling for a pre-emptive ban on such weapons. I was one of the organizers of the letter, and today I spoke at the U.N. for a third time calling once again for a ban. Inside look: How Amazon’s robots help pick, pack, and ship your holiday purchases. DUPONT, Wash. — For those with an interest in logistics, robotics, and supply chain efficiency, touring an Amazon fulfillment center is like walking around a wonderland. 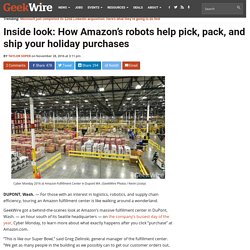 GeekWire got a behind-the-scenes look at Amazon’s massive fulfillment center in DuPont, Wash. — an hour south of its Seattle headquarters — on the company’s busiest day of the year, Cyber Monday, to learn more about what exactly happens after you click “purchase” at Amazon.com. Boeing buys Liquid Robotics to boost seagoing drones. The Boeing Co. says it has agreed to acquire Liquid Robotics, its teammate in a years-long effort to create surfboard-sized robots that can use wave power to roam the seas. 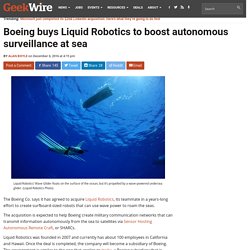 The acquisition is expected to help Boeing create military communication networks that can transmit information autonomously from the sea to satellites via Sensor Hosting Autonomous Remote Craft, or SHARCs. Liquid Robotics was founded in 2007 and currently has about 100 employees in California and Hawaii. Once the deal is completed, the company will become a subsidiary of Boeing. The arrangement is similar to the one that applies to Insitu, a Boeing subsidiary that is headquartered in Bingen, Wash., and manufactures ScanEagle military-grade drones.

Real Robots Fight A Virtual War in Your Living Room - Bloomberg. Silas Adekunle is trying to take the augmented world -- and success -- of Pokemon Go to the next level by adding robots. 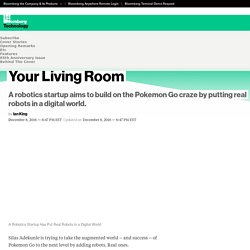 Real ones. The 25-year-old Nigerian-born chief executive officer of Reach Robotics may be on the cusp of creating the next big craze, if the first impression of his MekaMon robots is any indication. While there are already plenty of spider-type robot toys on the market, the U.K. startup has put a lot of work into giving the MekaMon creations a range of movements, postures and canned moves that make them stick out. Create, Discover and Share on Gfycat. BenevolentBio’s artificial intelligence could discover a better treatment for ALS. What if the drug that could effectively treat amyotrophic lateral sclerosis, the paralyzing neurological disease that skyrocketed into the public consciousness thanks to the ice bucket challenge, already exists? 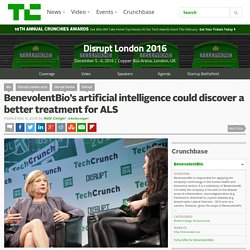 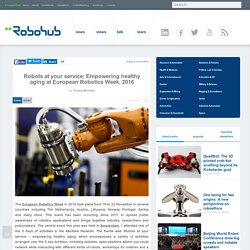 This event has been occurring since 2011 to spread public awareness of robotics applications and brings together industry, researchers and policymakers. The central event this year was held in Amsterdam. Birds flying through laser light reveal faults in flight research, study shows. The protective goggles are tight, the chin strap secure. 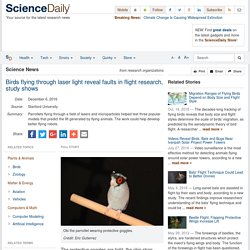 Conditions are calm and the lasers are ready; the air is infused with tiny aerosol particles that are primed to scatter and track at the slightest disruption. Wait for the signal. What's The Difference Between Machine Learning And AI? Let Us Help Catch You Up. AI is everywhere at the moment, and it’s responsible for everything from the virtual assistants on our smartphones to the self-driving cars soon to be filling our roads to the cutting-edge image recognition systems reported on by yours truly. Wall-jumping robot is most vertically agile ever built. Roboticists at UC Berkeley have designed a small robot that can leap into the air and then spring off a wall, or perform multiple vertical jumps in a row, resulting in the highest robotic vertical jumping agility ever recorded.

The agility of the robot opens new pathways of locomotion that were not previously attainable. Will Artificial Intelligence Be the Next Einstein? SAN FRANCISCO – Forget the Terminator. The next robot on the horizon may be wearing a lab coat. Artificial intelligence (AI) is already helping scientists form testable hypotheses that enable experts to run real experiments, and the technology may soon be poised to help businesses make decisions, one scientist says. However, that doesn't mean the machines will be taking over from humans entirely. Instead, humans and machines have complementary skillsets, so AI could help researchers with the work they already do, Laura Haas, a computer scientist and director of the IBM Research Accelerated Discovery Lab in San Jose, California, said here Wednesday (Dec. 7) at the Future Technologies Conference.

Apple Inc. will allow its artificial intelligence teams to publish research papers for the first time, marking a significant change in strategy that could help accelerate the iPhone maker’s advances in deep learning. When Apple introduced its Siri virtual assistant in 2011, the company appeared to have a head start over many of its nearest competitors. But it has lost ground since then to the likes of Alphabet Inc.’s Google Assistant and Amazon.com Inc.’s Alexa. Researchers say among the reasons Apple has failed to keep pace is its unwillingness to allow its AI engineers to publish scientific papers, stymieing its ability to feed off wider advances in the field. That policy has now changed, Russ Salakhutdinov, an Apple director of AI research, said Monday at the Neural Information Processing Systems conference in Barcelona, according to Twitter posts from those present.

Computer learns to recognize sounds by watching video. In recent years, computers have gotten remarkably good at recognizing speech and images: Think of the dictation software on most cellphones, or the algorithms that automatically identify people in photos posted to Facebook. White House criticizes regressive Chinese cyber security law. The White House has weighed in on the introduction of a new cyber security law in China after raising concerns about the policy during bilateral talks on cybercrime between officials of both nations. A frank exchange took place during a meeting between US national security adviser Susan Rice and Chinese state councilor Guo Shengkun, while discussing the need to ‘fully adhere’ to an anti-hacking pact signed by both countries.

MIT's Modular Robotic Chain Is Whatever You Want It To Be. Researchers are training AI to listen just like humans. Artificial intelligence researchers are making progress towards their goals of training AI systems to understand speech from audio input alone, just like humans do. Wall-jumping robot is most vertically agile ever built. AI firms in Europe are among the best in the world. Tech would use drones and insect biobots to map disaster areas. Researchers at North Carolina State University have developed a combination of software and hardware that will allow them to use unmanned aerial vehicles (UAVs) and insect cyborgs, or biobots, to map large, unfamiliar areas -- such as collapsed buildings after a disaster.

According to the Wall Street Journal, under the new regulations, China will require software companies, network-equipment manufacturers and other technology companies to disclose their source codes—the building blocks of computer programs—in order to prove their products cannot be infiltrated by hackers. Robotics startup Exotec raises $3.5 million to help warehouses pack and dispatch goods using mini robots.

It's no Christmas No 1, but AI-generated song brings festive cheer to researchers. Uk.businessinsider. Uk.businessinsider. New mini robot sub unveiled at the National Oceanography Centre. Toddler robots help solve how children learn. Facebook developing artificial intelligence to flag offensive live videos. A world without work is coming – it could be utopia or it could be hell. Merkel calls for balanced approach to data protection. Artificial intelligence has learned how to pick out criminals by their faces. Will Artificial Intelligence Replace Managers?

The real reason for disappearing jobs isn't trade—it's robots. Just Eat shows how its robots will shape the future of food delivery. Artificial intelligence has learned how to pick out criminals by their faces. AnalyticsMD tech innovator gets $13M from investors to accelerate artificial intelligence in hospitals. Robots to replace co-pilots and fly planes - Airliner tests A1 machine.

These Are My 2 Biggest Fears About Artificial Intelligence. 66% of Organizations Won't Survive a Cyberattack. AI robot now has to get a 'real job' after FAILING a university exam for the fourth year. Robots will take over most jobs within 30 years, experts warn. Google game 'Quick, draw!' uses AI to guess what you're drawing. Cockroach Robot Flips Itself With Insect-Inspired Wings. Hackers hit Canada's military recruitment site redirecting users to China's government website. Google AI experiments help you appreciate neural networks. Expert says AI-driven sex robots will blow you... away. Cybersecurity. Cybersecurity. Artificial intelligence will 'inevitably' destroy millions of jobs. The sharks of AI will attack expensive and scarce workers faster than they eat drivers. 'Partnership on AI' formed by Google, Facebook, Amazon, IBM and Microsoft. Artificial intelligence: How to turn Siri into Samantha. Intelligent Machines: The jobs robots will steal first.

Robots will take over most jobs within 30 years, experts warn. NASA's Robonaut 2 Droid Gets Its Legs on Space Station. Battle of the Bots: How AI Is Taking Over the World of Cybersecurity. China’s robot revolution. Unmanned Robots for Ocean Data Liquid Robotics. The robot army of the future - from killer drones to cyborg super soldiers. This is what will happen when robots take over the world. Hot Robot At SXSW Says She Wants To Destroy Humans. Robots threaten 15m UK jobs, says Bank of England's chief economist. Universal basic income: If a robot takes your job, it could actually be good for you. Amazon to step up UK tests of delivery drones. Forrester : Marketing : Robots, AI Will Replace 7% Of US Jobs By 2025.