What is Intelligence and How is it Measured? Author: Hsin-Yi Cohen BSc, MA, MSt - Updated: 26 February 2013| Comment Intelligence is a term that is difficult to define, and it can mean many different things to different people. 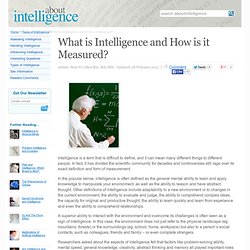 In fact, it has divided the scientific community for decades and controversies still rage over its exact definition and form of measurement. Does IQ Test Really Measure Intelligence? Why do I need to register or sign in for WebMD to save? 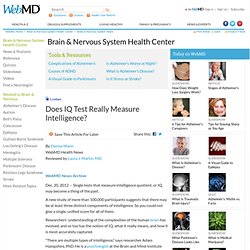 We will provide you with a dropdown of all your saved articles when you are registered and signed in. WebMD News Archive Dec. 20, 2012 -- Single tests that measure intelligence quotient, or IQ, may become a thing of the past. A new study of more than 100,000 participants suggests that there may be at least three distinct components of intelligence. So you could not give a single, unified score for all of them. Researchers' understanding of the complexities of the human brain has evolved, and so too has the notion of IQ, what it really means, and how it is most accurately captured. “There are multiple types of intelligence,” says researcher Adam Hampshire, PhD.

Using Many IQ Tests In the study, all participants were invited to take a series of 12 online tests that measure memory, reasoning, attention, and planning as well as information on the test takers' background and lifestyle. Lifestyle factors count, too. RIP IQ Test? Causes of Intelligence - Child Development Theory: Middle Childhood. Angela Oswalt, MSW, edited by Mark Dombeck, Ph.D. 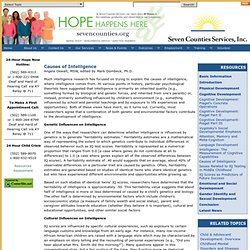 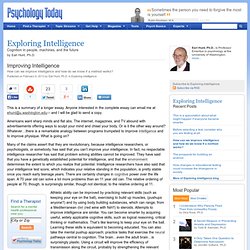 Anyone interested in the complete essay can email me at ehunt@u.washington.edu and I will be glad to send a copy. Americans want sharp minds and flat abs. The internet, magazines, and TV abound with advertisements offering ways to sculpt your mind and chisel your body. Or is it the other way around? Whatever…there is a remarkable analogy between programs trumpeted to improve intelligence and to improve physique.

1) Beware of testimonials. Difference Between Wisdom And Intelligence. The two traits do not usually exist together simply because a person who is wise has learned through experience while a person who is intelligent usually will have great book knowledge. 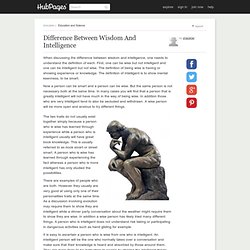 This is usually referred to as book smart or street smart. A person who is wise has learned through experiencing the fact whereas a person who is more intelligent has only studied the possibilities. There are examples of people who are both. However they usually are very good at using only one of their personalities traits at the same time. As a discussion involving evolution may require them to show they are intelligent while a dinner party conversation about the weather might require them to show they are wise. It is easy to ascertain a person who is wise from one who is intelligent. However an individual that is wise will advise another about the dangers, problems and so on of a plan and then move on.

Not everyone has the ability to absorb the necessary information to be either wise or intelligent. Information, Knowledge & Intelligence. Articles Alistair MacFarlane considers the differences between these crucial concepts, and the implications for how we think about computers. 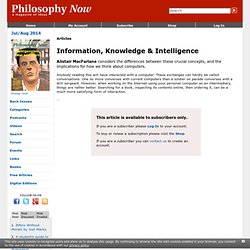 Anybody reading this will have interacted with a computer. These exchanges can hardly be called conversations. One no more converses with current computers than a soldier on parade converses with a drill sergeant. However, when working on the Internet using your personal computer as an intermediary, things are rather better. Emotional Intelligence vs Intelligence Quotient. IQ or EQ: Which One Is More Important? In his 1996 book Emotional Intelligence, author Daniel Goleman suggested that EQ (or emotional intelligence quotient) might actually be more important than IQ. 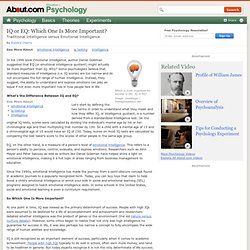 Why? Some psychologists believe that standard measures of intelligence (i.e. IQ scores) are too narrow and do not encompass the full range of human intelligence. Instead, they suggest, the ability to understand and express emotions can play an equal if not even more important role in how people fare in life. What's the Difference Between IQ and EQ?