Explore Cornell - Home Gardening - Introduction. Burpee Seeds and Plants - Home Garden, Vegetable Seeds, Annual Flowers at Burpee.com. Bonsai Culture Group Malta. Best Indoor Plants. Chrysanthemum. Etymology[edit] The name "chrysanthemum" is derived from the Greek words chrysos (gold) and anthemon (flower).[2] Taxonomy[edit] The genus once included more species, but was split several decades ago into several genera, putting the economically important florist's chrysanthemum in the genus Dendranthema. The naming of the genera has been contentious, but a ruling of the International Code of Botanical Nomenclature in 1999 changed the defining species of the genus to Chrysanthemum indicum, restoring the florist's chrysanthemum to the genus Chrysanthemum. The other species previously included in the narrow view of the genus Chrysanthemum are now transferred to the genus Glebionis.

Chamaedorea. Chamaedorea (from Ancient Greek χαμαί (chamai), meaning "on the ground", and δωρεά (dorea), meaning "gift", in reference to easily-reached fruits, or the plants' low-growing nature[2]) is a genus of 107 species of palms, native to subtropical and tropical regions of the Americas.[3][4] They are small palms, growing to 0.3–6 m (1 ft 0 in–19 ft 8 in) tall with slender, cane-like stems, growing in the understory in rainforests, and often spreading by means of underground runners, forming clonal colonies.

The leaves are pinnate (rarely entire), with one to numerous leaflets. The flowers are produced in inflorescences; they are dioecious, with male and female flowers on separate plants. The fruit is an orange or red drupe 0.5–2 cm diameter.[4] Perhaps the best-known species is Chamaedorea elegans (neanthe bella palm or parlour palm) from Mexico and Guatemala. It is popular as a houseplant, particularly in Victorian houses. Sansevieria trifasciata. Description[edit] The specific epithet trifasciata means "three bundles".[2] Associations[edit] It is commonly called the snake plant (not to be confused with the very similarly named Nassauvia serpens), because of the shape of its leaves, or mother-in-law's tongue because of their sharpness. In China, it is known as hǔwěilán (虎尾兰, tiger's tail orchid).

Dypsis lutescens. Description[edit] It is grown as an ornamental plant in gardens in tropical and subtropical regions, and elsewhere indoors as a houseplant. It has gained the Royal Horticultural Society's Award of Garden Merit.[3] One of several common names, "butterfly palm" refers to the leaves which curve upwards in multiple stems to create a butterfly look.[4] In its introduced range, this plant acts as a supplier of fruit to some bird species which feed on it opportunistically, such as Pitangus sulphuratus, Coereba flaveola and Thraupis sayaca species in Brazil.[5] Air quality[edit] According to NASA and Dr.

Chlorophytum comosum. Chlorophytum comosum, often called the spider plant, airplane plant or hen-and-chickens,[2] is a flowering perennial herb. It is native to tropical and southern Africa, but has become naturalized in other parts of the world, including western Australia.[3][4] Variegated forms in particular are used as houseplants. Description[edit] Chlorophytum comosum grows to about 60 centimetres (24 in) high. It has fleshy, tuberous roots, about 5–10 centimetres (2–4 in) long. The long narrow leaves reach a length of 20–45 centimetres (8–18 in) and are around 6–25 millimetres (0.2–1.0 in) wide.[5] Flower of Chlorophytum comosum 'Vittatum' The inflorescences carry plantlets at the tips of their branches, which eventually droop and touch the soil, developing adventitious roots.

Spathiphyllum. Spathiphyllum is a genus of about 40 species of monocotyledonous flowering plants in the family Araceae, native to tropical regions of the Americas and southeastern Asia. 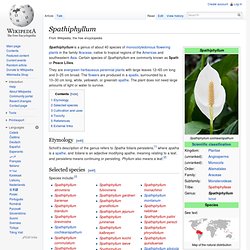 Certain species of Spathiphyllum are commonly known as Spath or Peace Lilies. They are evergreen herbaceous perennial plants with large leaves 12–65 cm long and 3–25 cm broad. The flowers are produced in a spadix, surrounded by a 10–30 cm long, white, yellowish, or greenish spathe. The plant does not need large amounts of light or water to survive. Etymology[edit] Schott's description of the genus refers to Spatha foliaris persistens,[1] where spatha is a spathe, and foliaris is an adjective modifying spathe, meaning relating to a leaf, and persistens means continuing or persisting. Gerbera. Gerbera viridifolia Gerbera jamesonii Gerbera (/ˈdʒɜrbərə/ or /ˈɡɜrbərə/) L. is a genus of ornamental plants from the sunflower family (Asteraceae).

It was named in honour of the German botanist and naturalist Traugott Gerber († 1743) who travelled extensively in Russia and was a friend of Carolus Linnaeus.[1] It has approximately 30 species in the wild, extending to South America, Africa and tropical Asia. The first scientific description of a Gerbera was made by J.D. Gerbera is very popular and widely used as a decorative garden plant or as cut flowers.