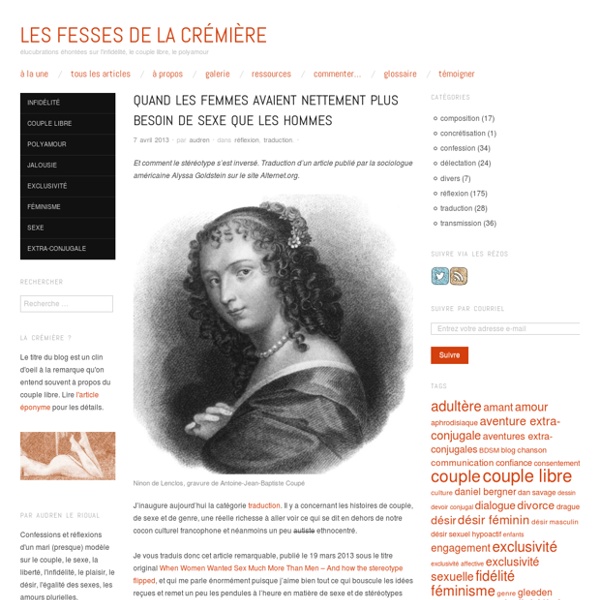 Related:  Histoire des femmes • Sex • Other Side of the Sky • Ref. Education Sexuelle

sans titre Women’s reputation as nurturing homebodies who left warfare to men in long-ago societies is under attack. Skeletal evidence from hunter-gatherers in what’s now California and from herders in Mongolia suggests that women warriors once existed in those populations. Two research teams had planned to present these findings April 17 at the annual meeting of the American Association of Physical Anthropologists. That meeting was canceled due to the coronavirus pandemic. Who I Am As A Sexual Being crow woman // may hiddleston I am playful. When I play with sexual energy, I laugh. A Form of Western Shamanism Created by a Woman for Women Feminist Shamanism® is a sophisticated shamanic practice for women that engenders personal growth and the gradual development of shamanic consciousness. It guides contemporary women to remember who they are and what their sacred responsibilities entail as they reclaim their natural feminine power and authority. My latest writing project, “Shamanic First Aid for Today’s Woman,” is a purse-sized 80-page booklet, which you can use to begin exploring and using feminist shamanic teachings. It is rich with simple feminist shamanic fixes for common issues faced by today’s women. It offers teachings, guidance, visualizations, breathwork exercises, and affirmation chants which will help you deal with the stresses of today’s world, and includes a six-page index so that you can quickly look things up on the go.

Antenna Foundation Antya Waegemann is a designer based in Brooklyn, NY. She has worked in a variety of mediums from museum pressed flower curation, graphic and visual design, and interaction design. With a background in urban sustainability and governance and a passion for social impact, her work often surrounds larger complex community based problem-solving. In May 2019, she graduated from the MFA Products of Design program at the School of Visual Arts where she worked on a year-long thesis exploration titled, When No One Believes You: Redesigning Rape Kits and Responses to Sexual Assault. As part of this exploration, she has become a sexual assault advocate at the New York Presbyterian Hospital in New York City. She most recently joined the NEW INC. incubator in New York City, part of the New Museum, to begin to prototype her rape kit and sexual assault response designs and formulate a venture around them.

Spare Rib Spare Rib was an active part of the emerging Women’s Liberation Movement in the late 20th century. Running from 1972-93, this now iconic magazine challenged the stereotyping and exploitation of women, while supporting collective, realistic solutions to the hurdles women faced. Visitors to this site can explore selected highlights from the magazine; and examine how the magazine was run, why it was started and the issues it dealt with. The full run of Spare Rib magazines can be accessed via Important information for researchers: from 7 June 2016, some material from the Spare Rib magazines on the journals archive site will be redacted until the Library is able to secure further copyright permissions. More information on the redactions can be found here.

Sex Love Liberation What would it be like to be totally connected to your body? Imagine being fully tuned into your inner rhythms. Imagine trusting your desires and slowing down enough to heed them. "Do-Me" Feminism and the Rise of Raunch From the book Feminism and Pop Culture by Andi Zeisler. Excerpted by arrangement with Seal Press, a member of the Perseus Books Group. Copyright Â© 2008. Constructing a politics of pleasure has been key to third wave feminism.

Department for Inclusive Education Department for inclusive education (dfie) No, today’s feminists are not The New Suffragettes - spiked The celebration of the centenary of the Representation of the People Act, which gave propertied women over 30 and working-class men the right to vote, has been fascinating. United in their cooing over the Suffragettes, the political class and many columnists have been tweeting and soundbiting to anyone who will listen about how deeply they love that historic victory for women. Some feminists have even claimed that the Suffragette cause is alive and well, as evidenced in the #MeToo ‘movement’, the BBC’s equal-pay warriors, and the well-connected women facing down sexist trolls. They can’t be serious. If we were able to bring the Suffragettes back from the dead, I bet they would have some bones to pick with those posing as their heirs.

"Don't Do It": Advice For a Sex-Starved Relationship Photo: Spencer Charles via Tumblr Hear me read this post aloud to you. Press play above to listen. In my last post, I talked about “just do it” sex, which one expert says is a cure for a sex-starved relationship. “Just doing it” looks like having sex even if you don’t want to, having sex especially if you don’t want to, and having it frequently whether you want to or not.

'I am a Feminist': New generation steps up to claim the 'F-word' mross@bayareanewsgroup.com These days, UC Berkeley senior Megan Riggio is proud to call herself a feminist. That wasn't always the case. While the history major and aspiring teacher says she grew up in San Jose believing in equal rights for women, she was wary of that identity as a young teenager.

Ettore Sottsass' penis-shaped Shiva Vase now comes in gold News: Spanish design brand BD Barcelona has released a limited-edition gold version of the suggestively shaped Shiva Vase by late Italian Postmodernist designer Ettore Sottsass. Ettore Sottsass, a leading member of the 1980s Memphis group, designed the original ceramic Shiva Vase for BD Barcelona in 1973. The 23-centimetre-tall pink-glazed vessel, shaped like an erect penis, has an opening in the top for displaying flowers and is balanced by two low rounded elements on either side.