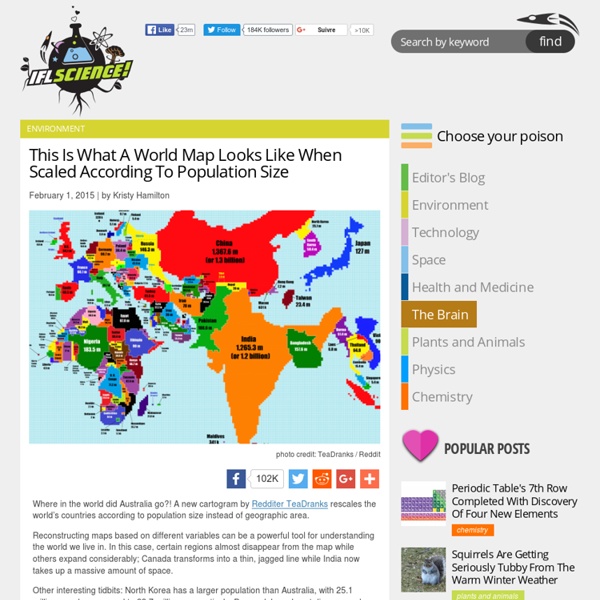 Where in the world did Australia go?! A new cartogram by Redditer TeaDranks rescales the world’s countries according to population size instead of geographic area. Reconstructing maps based on different variables can be a powerful tool for understanding the world we live in. In this case, certain regions almost disappear from the map while others expand considerably; Canada transforms into a thin, jagged line while India now takes up a massive amount of space. Other interesting tidbits: North Korea has a larger population than Australia, with 25.1 million people compared to 23.7 million, respectively. Denmark has almost disappeared from the map compared to the mighty space it usually takes up, and China now dwarfs Russia instead of vice versa. “I was inspired by this map which is now ten years old,” said TeaDranks. It is important to note that even modern world maps distort the Earth. To check out a high-resolution version of the map, click here. Credit: TeaDranks / Reddit

Where did English come from? - Claire Bowern There are two other TED-Ed lessons related to this topic: How languages evolve and How did English evolve? (a lesson that fills in some of the details that we omit here due to the fact that the focus of this lesson was further in the past). There is still a great deal of debate about Indo-European, most importantly about the location of the homeland. The First Australians: Ten great films about indigenous Australia - CURNBLOG The twenty-sixth of January has passed for another year, although most of my readers will be unaware of the significance that the day holds for Australians. It is Australia Day, a celebration of our national character (perhaps akin to Thanksgiving in the United States) on the date that the First Fleet arrived in 1788. The day is generally spent at barbeques with friends and usually involves what would normally be considered the consumption of an abhorrent amount of Australian beer.

Word Map This experiment brings together the power of Google Translate and the collective knowledge of Wikipedia to put into context the relationship between language and geographical space. Please let us know if you have any suggestions. Note that not all languages are currently supported by Google Translate. To browse, just zoom in/out, pan around and click on the word to learn more. The Boy in the Striped Pajamas Lesson Plan - Lesson Plan Chapter 1 Vocabulary chaos: disorder, clutter, confusion dismissively: in a way that shows a lack of interest hesitate: pause as the result of feeling reluctant to proceed mucky: dirty possessions: belongings

Photographs That Hold History A photo can capture much more than what's put in front of the lens. In one moment and one limited frame, an entire piece of history can shine through. These 30 incredible shots capture times past, but have cultural impacts that resonate even today. They are chilling, quotidian, and inspiring. They speak to our collective past. 1.

Cartography: The true true size of Africa LAST month Kai Krause, a computer-graphics guru, caused a stir with a map entitled "The True Size of Africa", which showed the outlines of other countries crammed into the outline of the African continent. His aim was to make "a small contribution in the fight against rampant Immappancy"—in particular, the fact that most people do not realise how much the ubiquitous Mercator projection distorts the relative sizes of countries. A sphere cannot be represented on a flat plane without distortion, which means all map projections distort in one way or another.

City WebQuests: Sydney: history and traditions This webquest will help you investigate Sydney: its history, music and famous landmarks. You will also plan a trip and send a postcard home. Downloadable worksheet and teacher's notes are available at the bottom of the page. Activity 1: Introductory quiz Visit the link below: Look at the page and, in pairs or small groups, find the answers to the following eight questions on the history of Sydney and Australia.