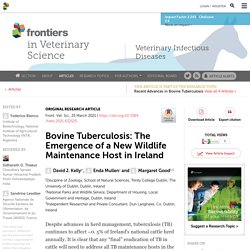 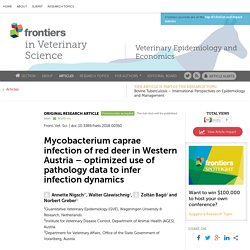 Free-ranging red deer are known to be the maintenance host of Mycobacterium (M.) caprae in certain areas in Austria, where cattle can become infected on alpine pastures shared with deer. The epidemiology of TB in deer in alpine regions is still poorly understood. To inform decisions on efficient interventions against TB in deer, a method is needed to better capture the infection dynamics on population level. A total of 4,521 free-ranging red deer from Austria’s most western Federal state Vorarlberg were TB-tested between 2009 and 2018. 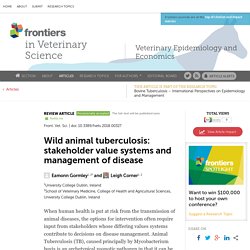 Animal Tuberculosis (TB), caused principally by Mycobacterium bovis is an archetypical zoonotic pathogen in that it can be transmitted from animals to humans and vice versa. Although elimination of zoonotic transmission of TB to humans is frequently promoted as the raison d’être for TB management in livestock, in many countries the control strategies are more likely based on minimising the impact of sustained infection on the agricultural industry. Where wild animals are implicated in the epidemiology of the disease, the options for control and eradication can require involvement of additional stakeholder groups. Edited by: CDC EID - DEC 2018 - Spatial Analysis of Wildlife Tuberculosis Based on a Serologic Survey Using Dried Blood Spots, Portugal. Nuno Santos1 , Telmo Nunes, Carlos Fonseca, Madalena Vieira-Pinto, Virgílio Almeida, Christian Gortázar, Margarida Correia-Neves, and Margarida-Correia-Neves Author affiliations: University of Minho School of Medicine, Braga, Portugal (N. 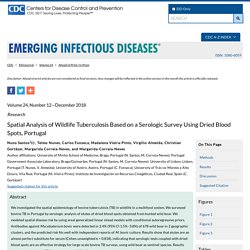 Santos, M. FRONTIERS IN VETERINARY SCIENCE 27/09/18 Evaluation of the Performance of the IDvet IFN-Gamma Test for Diagnosis of Bovine Tuberculosis in Spain. Introduction Bovine tuberculosis (bTB), caused by members of the Mycobacterium tuberculosis complex (mainly M. bovis, and to a lesser extent, M. caprae) is an important zoonotic disease with a global distribution that has major implications for both animal and human health (1). 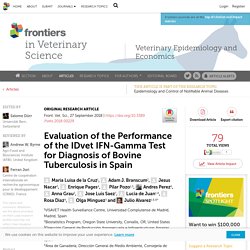 Implementation of control and eradication programs has led to a significant decrease of the bTB prevalence and to disease eradication in many industrialized countries (1–3). However, eradication efforts have not been uniformly successful, in part because currently available diagnostic tests cannot correctly determine the M. bovis infection status of all tested cattle (4). M. bovis infection in cattle is usually chronic, can remain subclinical for a long period, and infected cattle can become infectious long before they exhibit clinical signs of bTB (4). When present, the clinical signs of bTB are not pathognomonic. Materials and Methods Study Population Study 1. RETINTA_ES - SEPT 2018 - Présentation : Brucelosis, Tuberculosis y EETs. ENVA - 2017 - Thèse en ligne : La tuberculose des animaux de boucherie du grand-duché de Luxembourg. FRONTIERS IN VETERINARY SCIENCE 13/04/18 Comparison of alternative meat inspection regimes for pigs from non-controlled housing – considering the cost of error Original Research Denmark has not had cases of bovine tuberculosis (bovTB) for more than 30 ye. 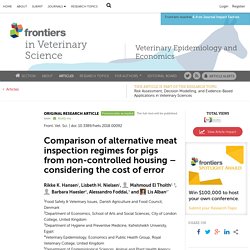 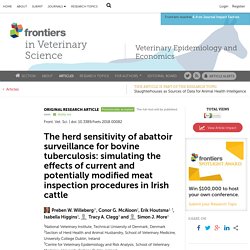 Concern has been raised that changes from CMI to VOI would adversely affect the effectiveness of surveillance for bovine tuberculosis (bTB) in EU member states, both for countries with and without official status of bTB freedom (OTF and non-OTF countries, respectively). This study was conducted to estimate the impact of a change from CMI to VOI in abattoirs on herd-level detection sensitivity in Ireland, a non-OTF country. Received: 01 Feb 2018; Accepted: 03 Apr 2018. FRONTIERS IN VETERINARY SCIENCE 04/04/18 Trends and Predictors Of Large Tuberculosis Episodes In Cattle Herds In Ireland. 1Centre for Veterinary Epidemiology and Risk Analysis, University College Dublin, Ireland 2Department of Agriculture Food and the Marine, Ireland 3Tipperary District Veterinary Office, Ireland Persistence of bovine tuberculosis (bTB) in cattle is an important feature of Mycobacterium bovis infection, presenting either as herd recurrence or local persistence. 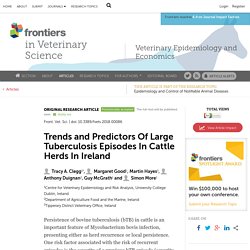 One risk factor associated with the risk of recurrent episodes is the severity of a previous bTB episode (severity reflecting the number of bTB reactors identified during the episode). In this study, we have sought to identify predictors that can distinguish between small (less severe) and large (more severe) bTB episodes, and to describe nationally the severity of bTB episodes over time. The study included descriptive statistics of the proportion of episodes by severity from 2004 to 2015 and a case-control study. BMC Veterinary Research 07/03/18 Prevalence of bovine tuberculosis in cattle, goats, and camels of traditional livestock raising communities in Eritrea.

This study presents the first efforts to assess the prevalence of BTB in cattle, goats and camels, and its zoonotic potential within the extensive traditional livestock husbandry system in Eritrea (Fig. 1). 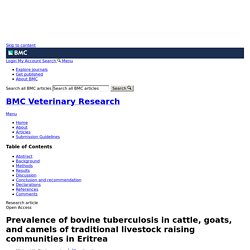 Focusing on cattle, our study reports low (1.2%) individual animal and 3.2% herd prevalences of BTB. Similar findings for individual animal prevalence were reported in Ethiopia, Gumi et al. [21] 5.5%, Ameni et al. [23] 1.8% and 4.7%, Ameni et al. ([24, 25], reported) 7.9% -11.6%, Tschopp et al. ([26, 27], 0.8%; 0.9%), and Mamo et al. [18] reported 11% and a herd prevalence of 44% in Ethiopia in the Afar region with similar conditions as the pastoral areas in our study. In Ghana 13.8% of individual animal prevalence was observed [28]. Although low, the prevalence in our study differed between regions, Debub showing the highest prevalence, 2.3%, where also a high (7.3%) BTB prevalence in dairy cattle was recorded in our previous study [14]. REV.SCI. OFF. INT. EPIZ - 2017 - Parasite prevalence in Mycobacterium spp. infected dairy goats in the Region of Murcia (south-east Spain) FRONTIERS IN VETERINARY SCIENCE 27/11/17 Farmer and Veterinarian Attitudes towards the Bovine Tuberculosis Eradication Programme in Spain: What Is Going on in the Field?

Introduction The influence of social factors on public health interventions is well known in human medicine and several studies taking these aspects into account have been done (1–3); however, these aspects have been often ignored in the implementation of animal health programmes. 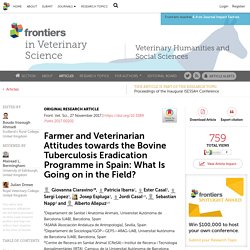 Recently, the situation has changed and the interest on the influence of social factors in the control programmes of animal diseases has greatly increased. As a matter of fact, several studies have highlighted the importance of understanding the attitudes and behaviours of the different stakeholders involved, as their actions have a great influence on the effectiveness and sustainability of such programmes (4–9).

The use of participatory approaches to investigate attitudes and behaviours is a valuable tool to conduct such studies (5). FRONTIERS IN VETERINARY SCIENCE 10/11/17 Farmer and vet attitudes towards the bovine tuberculosis eradication programme in Spain: what is going on in the field? 1Department of Animal Health and Anatomy, Universitat Autònoma de Barcelona, Spain 2ASANA (Asociación Andaluza de Antropología), Spain 3Department of Sociology / IGOP - GEPS - ARAG-UAB, Universitat Autònoma de Barcelona, Spain 4Centre de Recerca en Sanitat Animal, Spain The effectiveness of health interventions against bovine tuberculosis (bTB) is influenced by several “non-biological” factors that may hamper bTB detection and control.

Although the engagement of stakeholders is a key factor for the eradication programme's success, social factors have been often ignored in the control programmes of animal diseases, especially in developed countries. In this study, we used a qualitative approach to investigate perceptions, opinions, attitudes and beliefs of farmers and veterinarians that may influence the effectiveness of the Spanish bTB eradication programme. The study was carried out in two phases. Received: 30 May 2017; Accepted: 10 Nov 2017. * Correspondence: DVM. EFSA 04/08/17 Assessment of listing and categorisation of animal diseases within the framework of the Animal Health Law (Regulation (EU) No 2016/429): bovine tuberculosis. NUFFIELD INTERNATIONAL - SEPT 2016 - Bovine TB eradication programmes in Europe.

VEILLE SANITAIRE AU ROYAUME UNI ET EN BELGIQUE CONCERNANT LA TUBERCULOSE DES RUMINANTS. PLOS 23/12/14 Spatial Dynamics of Bovine Tuberculosis in the Autonomous Community of Madrid, Spain (2010–2012) Progress in control of bovine tuberculosis (bTB) is often not uniform, usually due to the effect of one or more sometimes unknown epidemiological factors impairing the success of eradication programs. Use of spatial analysis can help to identify clusters of persistence of disease, leading to the identification of these factors thus allowing the implementation of targeted control measures, and may provide some insights of disease transmission, particularly when combined with molecular typing techniques. Here, the spatial dynamics of bTB in a high prevalence region of Spain were assessed during a three year period (2010–2012) using data from the eradication campaigns to detect clusters of positive bTB herds and of those infected with certain Mycobacterium bovis strains (characterized using spoligotyping and VNTR typing).

BMC Veterinary Research 2012, 8:100 Eradication of bovine tuberculosis at a herd-level in Madrid, Spain: study of within-herd tr. Eradication of bTB at a herd level, which is prerequisite for disease eradication at a region and country level, has been impaired by the chronic nature of the disease that can lead to relatively long periods of “silent infection” in infected animals, especially at low infectious doses [8]. This feature of the disease, together with limitations in accuracy of the diagnostic techniques, can substantially extend the time needed for declaring a herd bTB free.

Several studies have been published dealing with the identification of risk factors at an individual or herd level associated with bTB [6,7,13-15] or with the detection of predictors of future herd breakdowns in bTB free herds [16], but longitudinal studies aiming at elucidating the disease dynamics in infected herds under a strong eradication pressure such as the one presented here have not been published in the peer reviewed literature. EFSA 14/06/12 Scientific Opinion on Review of the European Union Summary Report on trends and sources of zoonoses, zoonotic agen.

Despite control campaigns carried out since 1956, Bovine tuberculosis eradication has not yet been achieved and prevalence has remained between 1.6% and 1.8%. Researchers from the CReSA and UAB studied the success of these campaigns in Spain and concluded that the elimination pattern was not homogeneous throughout Spain and the ratio of elimination was different among zones. Veterinary Medicine International Volume 2011 (2011) Multihost Tuberculosis: Insights from the Portuguese Control Program.