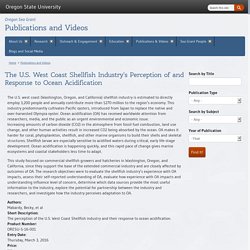 This industry predominantly cultivates Pacific oysters, introduced from Japan to replace the native and over-harvested Olympia oyster. Ocean acidification (OA) has received worldwide attention from researchers, media, and the public as an urgent environmental and economic issue. Increasing amounts of carbon dioxide (CO2) in the atmosphere from fossil fuel combustion, land use change, and other human activities result in increased CO2 being absorbed by the ocean. OA makes it harder for coral, phytoplankton, shellfish, and other marine organisms to build their shells and skeletal structures. Shellfish larvae are especially sensitive to acidified waters during critical, early life-stage development. Progress in Oceanography Volume 136, August 2015, Pages 71–91 Ocean acidification risk assessment for Alaska’s fishery sector. <div class="msgBox" style="margin-top:10px;"><span class="errMsg"><div>JavaScript is disabled on your browser. 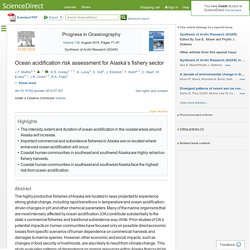 Please enable JavaScript to use all the features on this page. This page uses JavaScript to progressively load the article content as a user scrolls. Click the View full text link to bypass dynamically loaded article content. Journal of Shellfish Research. 12/2015; 34(3). Sensitivity of Mediterranean Bivalve Mollusc Aquaculture to Climate Change and Ocean Acidification: Results from a producers’ survey.

CLIMATE PROGRESS 04/10/12 Climate Change And Seafood Supply: Developing Countries Most Vulnerable To Ocean Acidification. By Tom Wittig Developing countries that rely on nourishment from the oceans will soon find their sources of food and way of life threatened, according to an Oceana study released last week. 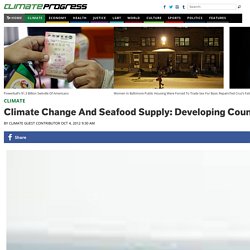 The report, Ocean-Based Food Security Threatened in a High CO2 World, ranks the top 50 nations most vulnerable to climate change and ocean acidification in the context of their seafood and fish consumption. Not surprisingly, those nations topping the list are among the least responsible for historic emissions of carbon dioxide. The Comoros claimed the dubious distinction of most threatened, followed by Togo, the Cook Islands, Kiribati, and Eritrea. Other notable countries in the top fifty include Pakistan (8), North Korea (25), China (35), and South Africa (46). Just how big is this threat? Losing [seafood] may mean more dependence on less healthy processed foods that are imported from abroad. 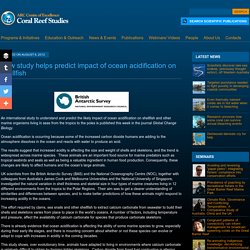 Ocean acidification is occurring because some of the increased carbon dioxide humans are adding to the atmosphere dissolves in the ocean and reacts with water to produce an acid. The results suggest that increased acidity is affecting the size and weight of shells and skeletons, and the trend is widespread across marine species. These animals are an important food source for marine predators such as tropical seabirds and seals as well as being a valuable ingredient in human food production. Consequently, these changes are likely to affect humans and the ocean’s large animals. This study shows, over evolutionary time, animals have adapted to living in environments where calcium carbonate is relatively difficult to obtain by forming lighter skeletons. CALIFORNIA OCEAN SCIENCE TRUST - 2010 - Is Ocean Acidification Affecting Shellfish. EUROPE 03/05/07 Mussels and Oysters Threatened by Ocean Acidification. 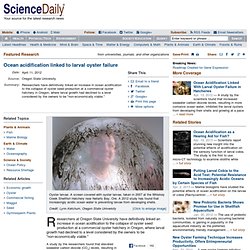 " A study by the researchers found that elevated seawater carbon dioxide (CO2) levels, resulting in more corrosive ocean water, inhibited the larval oysters from developing their shells and growing at a pace that would make commercial production cost-effective. As atmospheric CO2 levels continue to rise, this may serve as the proverbial canary in the coal mine for other ocean acidification impacts on shellfish, the scientists say. Results of the research have just been published in the journal, Limnology and Oceanography. 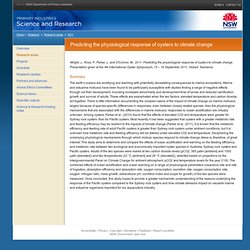 Predicting the physiological response of oysters to climate change. Presentation given at the 4th International Oyster Symposium, 15 – 18 September 2011, Hobart, Tasmania. Summary The earth’s oceans are acidifying and warming with potentially devastating consequences to marine ecosystems. PRIFYSGOL BANGOR UNIVERSITY 11/05/12 Researchers meet in Ireland to discuss impacts of climate change to Irish Sea shellfisherie. SUSFISH researchers from Wales and Ireland recently met at University College Cork to discuss the impacts of climate change to commercial shellfish productivity in the Irish Sea. 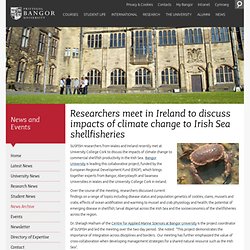 Bangor University is leading this collaborative project, funded by the European Regional Development Fund (ERDF), which brings together experts from Bangor, Aberystwyth and Swansea Universities in Wales and the University College Cork in Ireland. Over the course of the meeting, researchers discussed current findings on a range of topics including disease status and population genetics of cockles, clams, mussels and crabs; effects of ocean acidification and warming to mussel and crab physiology and health; the potential of emerging disease in shellfish; larval dispersal across the Irish Sea and the socioeconomics of the shellfisheries across the region.

Dr. SUSFISH aims to produce guidelines for future fisheries management and policy of the shellfish industry in Ireland & Wales for the next 50-100 years.