Italian Version What is your project about? 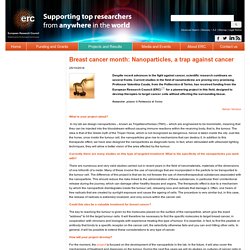 In my lab we design nanoparticles – known as TrojaNanoHorses (TNH) – which are engineered to be biomimetic, meaning that they can be injected into the bloodstream without causing immune reactions within the receiving body, that is, the tumour. The idea is that of the Greek myth of the Trojan Horse, which is not recognized as dangerous, hence is taken inside the city. Just like the horse, once inside the tumour cell, the nanoparticles give rise to mechanisms that can destroy it.

In addition to this therapeutic effect, we have also designed the nanoparticles as diagnostic tools. Currently there are many studies on this type of targeted treatment. There are numerous and very valid studies carried out in recent years in the field of nanomaterials, materials of the dimensions of one billionth of a meter.

Could this also be a valuable treatment for breast cancer? How will your project develop? How did you decide to specialise in nanomedicine? Prof. TG TECHNO 05/06/15 Cost-effective risk assessment of nanomaterials may be feasible. Details Published on 05 June 2015 Hits: 37 Companies, authorities and scientists can save time, money and test animals in the risk assessment of nanomaterials by using available data. 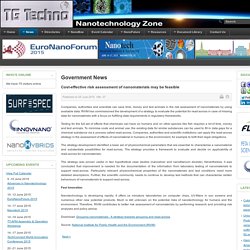 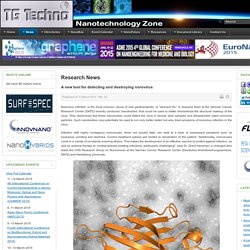 A research team at the German Cancer Research Center (DKFZ) recently produced “nanobodies” that could be used to better characterize the structural makeup of the virus. They discovered that these nanobodies could detect the virus in clinical stool samples and disassemble intact norovirus particles. Infection with highly contagious noroviruses, while not usually fatal, can lead to a slew of unpleasant symptoms such as excessive vomiting and diarrhea. SWISS TPH 23/12/14 Nanotechnology Prevents Host Cell Invasion by Malaria Parasites. [Translate to Français:] After maturation several daughter parasites (yellow) are released from a single infected red blood cell. 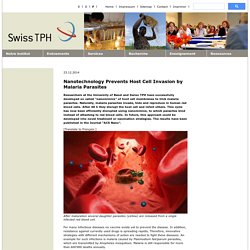 For many infectious diseases no vaccine exists yet to prevent the disease. In addition, resistance against currently used drugs is spreading rapidly. Therefore, innovative strategies with different mechanisms of action are needed to fight these diseases. Nanotechnology, Science and Applications 2014:7 73–83 Prevention of bacterial foodborne disease using nanobiotechnology. BFR 20/03/13 Successful research strategy for nanotechnology protects humans and the environment. The federal authorities assess research projects on the safety of nanomaterials – joint press release by the Federal Institute for Occupational Safety and Health (BAuA), Federal Institute for Risk Assessment (BfR), Federal Environment Agency (UBA), Federal Institute for Materials Research and Testing (BAM) and the Federal Physical-Technical Institute (PTB) Nanotechnology is universally hailed as the progressive technology of the 21st century. 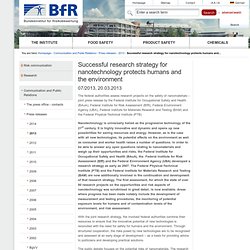 It is highly innovative and dynamic and opens up new possibilities for saving resources and energy. However, as is the case with all new technologies, its potential effects on the environment as well as consumer and worker health raises a number of questions. With the joint research strategy, the involved federal authorities combine their resources to ensure that the innovative potential of new technologies is reconciled with the need for safety for humans and the environment.

UNIVERSITE LEUVEN 24/11/10 Présentation : Nanotechnology in food diagnostics. HOSPITAL FOR SPECIAL SURGERY 27/04/11 Researchers identify tool to detect total joint replacement surgeries that are starting to. New York—April 27, 2011 The study shows that a minute molecule designed with novel properties can be used to identify patients who are at risk for failure and potentially deliver drugs to stop this process. 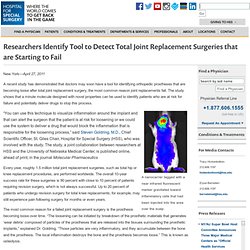 “You can use this technique to visualize inflammation around the implant and that can alert the surgeon that the patient is at risk for loosening or we could use the system to deliver a drug that would block the inflammation that is responsible for the loosening process,” said Steven Goldring, M.D., Chief Scientific Officer, St. Giles Chair, Hospital for Special Surgery (HSS), who was involved with the study. The study, a joint collaboration between researchers at HSS and the University of Nebraska Medical Center, is published online, ahead of print, in the journal Molecular Pharmaceutics Every year, roughly 1.5 million total joint replacement surgeries, such as total hip or knee replacement procedures, are performed worldwide. Several years ago, Dr. Dr. WILSON INTERNATIONAL CENTER 26/08/07 Green nanotechnology - It's easer than you think. NANOTECH NOW - Nanotechnology at BASF - A great future for tiny particlesImproved products, more efficient processes and new pro.

Home > Directory > Miscellaneous Nanotechnology > Nanotechnology at BASF A great future for tiny particles Improved products, more efficient processes and new properties Rarely has a new technology attracted so much interest within only a few years: Almost all the media regularly report on the latest research findings. 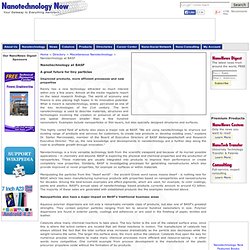 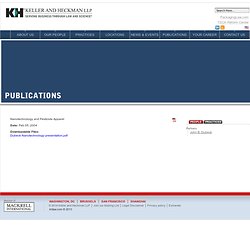 Nanostructured membranes could reduce carbon capture's energy consumption and costs, making it more attractive than current technology. Europe produces one gigaton of carbon dioxide annually and wafts it into the atmosphere. Around one-third of this stems from fossil-fuelled power plants. During the absorption process, flue gasses - mainly consisting of nitrogen, water, dust particles and, of course, CO2 - flow through several baths in which the carbon dioxide is bound with amines.