Convention on the Rights of the Child. Text in PDF Format Adopted and opened for signature, ratification and accession by General Assembly resolution 44/25 of 20 November 1989 entry into force 2 September 1990, in accordance with article 49 Preamble The States Parties to the present Convention, Considering that, in accordance with the principles proclaimed in the Charter of the United Nations, recognition of the inherent dignity and of the equal and inalienable rights of all members of the human family is the foundation of freedom, justice and peace in the world, Bearing in mind that the peoples of the United Nations have, in the Charter, reaffirmed their faith in fundamental human rights and in the dignity and worth of the human person, and have determined to promote social progress and better standards of life in larger freedom, Recalling that, in the Universal Declaration of Human Rights, the United Nations has proclaimed that childhood is entitled to special care and assistance, Have agreed as follows: Article 1 Article 2 1. 2. 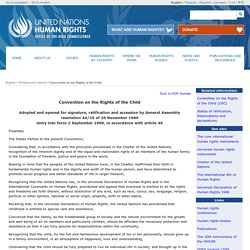 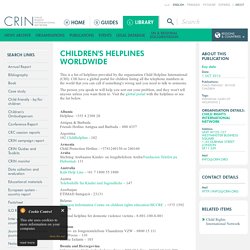 CHI have a global portal for children listing all the telephone numbers in the world that you can call if something's wrong and you need to talk to someone. The person you speak to will help you sort out your problem, and they won't tell anyone unless you want them to. Visit the global portal with the helplines or see the list below. AlbaniaHelpline- +355 4 2308 20 Antigua & BarbudaFriends Hotline Antigua and Barbuda – 800 4357 Argentina102 Childhelpline - 102 Armenia Child Protection Hotline - +3741240150 or 240160 ArubaStichting Arubaanse Kinder- en Jeugdtelefoon Aruba/Fundacion Telefon pa Hubentud- 131 AustraliaKids Help Line - +61 7 1800 55 1800 AustriaTelefonhilfe fur Kinder und Jugendliche – 147 AzerbaijanETIMAD Sumgayit - 23131 BelarusSmorgon Information Centre on children rights education/SICCRE - +375 1592 33 129 National helpline for domestic violence victims - 8-801-100-8-801 123Alô! Curaçao. EUROPE: Protection gaps risk exposing children with disabilities to abuse.

[4 December 2015] - Boys and girls with disabilities are more likely to be victims of physical and sexual violence, and neglect, than those without disabilities. 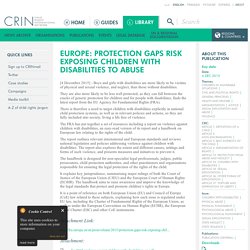 Connecting with the Committee. Useful words & phrasesChildren: Anyone under 18.Committee on the rights of the Child (the Committee): A group of 18 international children’s rights experts who check how well governments protect and respect children’s rights.Convention: Another word for ‘treaty’.NGO(Non-Governmental Organisation): A charity or group that is not part of a government.Ratify: Agreeing to do what a treaty says.Treaty: A formal agreement that a country can decide to accept. 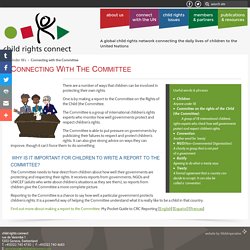 It can also be called a ‘convention’. There are a number of ways that children can be involved in protecting their own rights. One is by making a report to the Committee on the Rights of the Child (the Committee. The Committee is a group of international children’s rights experts who monitor how well governments protect and respect children’s rights. The Committee is able to put pressure on governments by publicizing their failures to respect and protect children’s rights. Children's Rights. Child Rights Connect. Council of Europe - ETS No. 192 - Convention on Contact concerning Children. Conseil de l'Europe - STE n° 192 - Convention sur les relations personnelles concernant les enfants.