Fragances & Globalization. Online/summer courses. Untitled. In-Between Believing: The Implicit Racist. Many Caucasians in academia sincerely profess that all races are of equal intelligence. 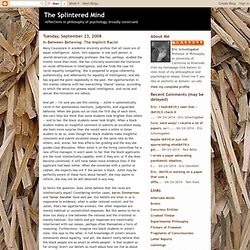 Juliet, let's suppose, is one such person, a Jewish-American philosophy professor. She has, perhaps, studied the matter more than most: She has criticially examined the literature on racial differences in intelligence, and she finds the case for racial equality compelling. She is prepared to argue coherently, authentically, and vehemently for equality of intelligence, and she has argued the point repeatedly in the past. Her egalitarianism in this matter coheres with her overarching "liberal" stance, according to which the sexes too possess equal intelligence, and racial and sexual discrimination are odious.

And yet -- I'm sure you see this coming -- Juliet is systematically racist in her spontaneous reactions, judgments, and unguarded behavior. So here's the question: Does Juliet believe that the races are intellectually equal? I recommend we treat this as an "in-between" case of believing. UNHCR. Sports Enhancement. Spring in America brings flowers, sweet warm breezes, and the thwack of a bat striking a baseball. 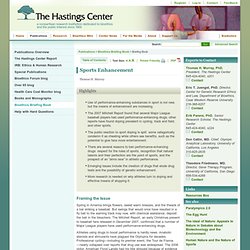 But swings that would once have resulted in a fly ball to the warning track may now, with chemical assistance, deposit the ball in the bleachers. The Mitchell Report, an early Christmas present to baseball fans released in December 2007, confirmed that a number of Major League players have used performance-enhancing drugs. Athletes using drugs to boost performance is hardly news. Anabolic steroids and stimulants have plagued the Olympics for decades. Professional cycling—including its premier event, the Tour de France—nearly collapsed over reports that drug use was widespread. An intriguing split has emerged in the public reaction to baseball’s drug problem. Others are not so sure. Others say that athletes should be free to do whatever they want to their own bodies.

A more subtle and serious question is why we prohibit certain performance aids in the first place. Thomas H. New Technologies. A/CONF.151/26 (Vol. I) REPORT OF THE UNITED NATIONS CONFERENCE ON ENVIRONMENT AND DEVELOPMENT.

Géoportail. A [Internet Encyclopedia of Philosophy] Help. This is Money: Be your own financial adviser - predictions, advice & tips. The Roman Empire: in the First Century. The Roman Empire. Emperors. Emperors. The story of Rome’s Emperors in the first century AD has got it all – love, murder and revenge, fear and greed, envy and pride. 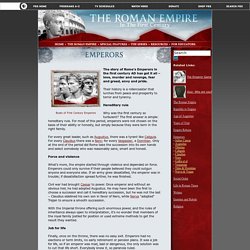 Their history is a rollercoaster that lurches from peace and prosperity to terror and tyranny. Hereditary rule Why was the first century so turbulent? The first answer is simple: hereditary rule. For most of this period, emperors were not chosen on the basis of their ability or honesty, but simply because they were born in the right family. For every great leader, such as Augustus, there was a tyrant like Caligula. Force and violence What’s more, the empire started through violence and depended on force. Civil war had brought Caesar to power. With the Imperial throne offering such enormous power, and the rules of inheritance always open to interpretation, it’s no wonder that members of the royal family jostled for position or used extreme methods to get the result they wanted. Job for life. 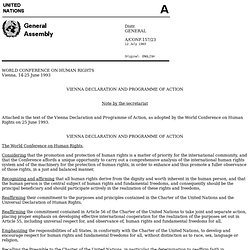 The World Conference on Human Rights, Considering that the promotion and protection of human rights is a matter of priority for the international community, and that the Conference affords a unique opportunity to carry out a comprehensive analysis of the international human rights system and of the machinery for the protection of human rights, in order to enhance and thus promote a fuller observance of those rights, in a just and balanced manner,