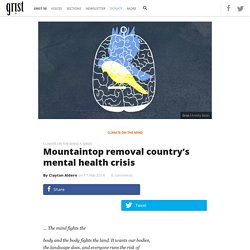 It wants our bodies, the landscape does, and everyone runs the risk of being swallowed up. Can we love nature for what it really is: predatory? We do not walk through a passive landscape. The paint dries eventually. Decompose eventually. Siken, War of the Foxes I called Kathy Selvage because someone had told me she could explain what it was like to lose a mountain. Mountaintop removal, it’s called; a type of surface mining. It is no secret that times are tough in coal country. I. Selvage knows about the intimacy of the mountains because she has spent a life living in their shadows. Before our conversation, Selvage sends me a photograph of herself in which she’s standing in front of a No Trespassing sign.

Homeplace; one word. There are two things that come up in nearly every conversation I have with people from or familiar with mountaintop removal towns. “The homeplace where I grew up is under all that rubble.” II. It gets worse. Mountaintop removal mining is flattening Appalachia. Researchers have quantified the topographical footprint of 40 years of mountaintop removal on the Appalachian landscape, and the results are, ahem, flat-out depressing. 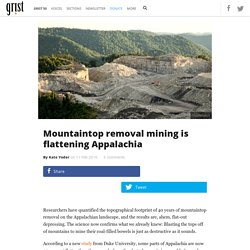 The science now confirms what we already knew: Blasting the tops off of mountains to mine their coal-filled bowels is just as destructive as it sounds. According to a new study from Duke University, some parts of Appalachia are now 40 percent flatter than they were before, thanks to humanity’s scramble for coal. And in southern West Virginia, the volume of bedrock that coal companies have removed — 1.5 cubic miles — would bury Manhattan. After removal, that rock was dumped into nearby valleys and headwaters, where it leached heavy metals and other toxins into the waterways. ThinkProgress points out that pollution and obstruction from mining operations can persist for decades, impacting all walks (and swims) of life. In Appalachia, the coal industry is in collapse, but the mountains aren’t coming back. In Appalachia, explosions have leveled the mountaintops into perfect race tracks for Ryan Hensley’s all-terrain vehicle (ATV). 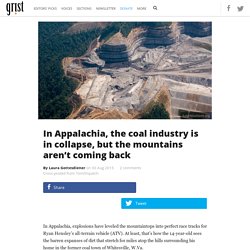 At least, that’s how the 14-year-old sees the barren expanses of dirt that stretch for miles atop the hills surrounding his home in the former coal town of Whitesville, W.Va. “They’re going to blast that one next,” he says, pointing to a peak in the distance. He’s referring to a process known as “mountaintop removal,” in which coal companies use explosives to blast away hundreds of feet of rock in order to unearth underground seams of coal.

“And then it’ll be just blank space,” he adds. “Like the Taylor Swift song.” Skinny and shirtless, Hensley looks no more than 11 or 12. Pass the ACHE Act and end mountaintop removal mining. The coal industry is waging a war on Appalachia, detonating millions of pounds of diesel fuel and explosives daily to rip the top off of mountains and access seams of coal contained within. 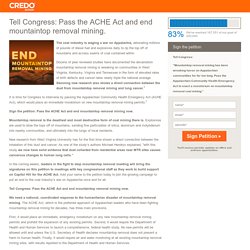 Dozens of peer reviewed studies have documented the devastation mountaintop removal mining is wreaking on communities in West Virginia, Kentucky, Virginia and Tennessee in the form of elevated rates of birth defects and cancer rates nearly triple the national average. Stunning new research also shows a direct connection between the dust from mountaintop removal mining and lung cancer.1 It is time for Congress to intervene by passing the Appalachian Community Health Emergency Act (ACHE Act), which would place an immediate moratorium on new mountaintop removal mining permits.2. Another court victory for EPA — this time on mountaintop-removal rules. Blowing up mountains so that their coal-filled bellies can be stripped of their climate-changing innards doesn’t just ruin Southern Appalachian forests. 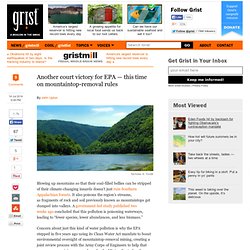 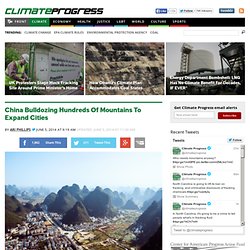 With the population and economy still growing at a rapid clip, the government has undertaken a plan to bulldoze hundreds of mountains to create land for building on. In a paper published in journal Nature this week, three researchers from Chang’an University in China warn that the scores of mountains already being truncated is leading to air and water pollution, erosion, and flooding. Totaling several hundred square miles of newly flattened land, mountaintop removal has never been carried out at this scale, warn the authors, not even in strip mining operations common in the United States. Another Mountaintop Removal Company Goes Bankrupt. Written by Amanda Starbuck Big news this week in the coal industry: Patriot Coal, the third-largest Mountaintop Removal (MTR) coal mining company, is filing for bankruptcy.

Bank of America is among the banks providing bankruptcy filing services for Patriot. This is a real opportunity for BofA to use its influence and environmental ambition to work with Patriot and forward-thinking politicians like West Virginia Senator Jay Rockefeller to close and clean up those MTR mines and transition the Appalachia region into a producer of clean, renewable energy. Magnolia Mountain - The Hand of Man - YouTube#at=316#! New Folk Music Video On Impact of Mountain Top Removal. Written by Stephen Lacey, Climate Progress. 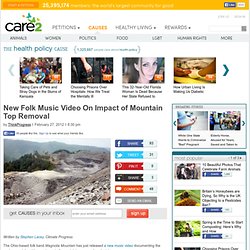 Two Activists Speak Out Against Mountaintop Removal Mining. This post is courtesy of our friends at Earthjustice. 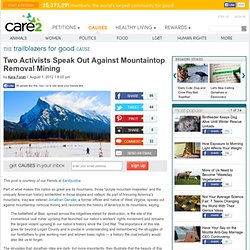 Part of what makes this nation so great are its mountains, those “purple mountain majesties” and the uniquely American history embedded in those slopes and valleys. Court hands EPA a victory in fight against mountaintop-removal mining. Score one for the EPA — and everyone else who doesn’t like the idea of a coal company blasting the tops off mountains and dumping the waste into streams. 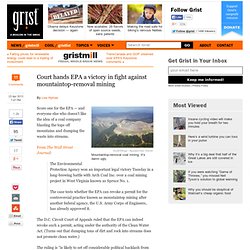 From The Wall Street Journal: The Environmental Protection Agency won an important legal victory Tuesday in a long-brewing battle with Arch Coal Inc. over a coal mining project in West Virginia known as Spruce No. 1.The case tests whether the EPA can revoke a permit for the controversial practice known as mountaintop mining after another federal agency, the U.S. Army Corps of Engineers, has already approved it. The D.C.