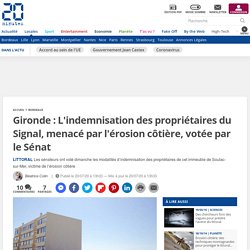 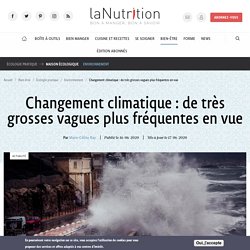 It’s not just Australia that’s having a rough start to the new year. 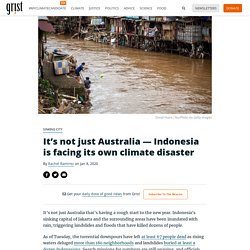 Indonesia’s sinking capital of Jakarta and the surrounding areas have been inundated with rain, triggering landslides and floods that have killed dozens of people. As of Tuesday, the torrential downpours have left at least 67 people dead as rising waters deluged more than 180 neighborhoods and landslides buried at least a dozen Indonesians. Search missions for survivors are still ongoing, and officials say the death toll is expected to rise as more bodies are found. 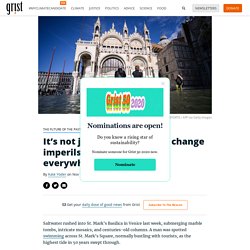 Mark’s Basilica in Venice last week, submerging marble tombs, intricate mosaics, and centuries-old columns. A man was spotted swimming across St. Mark’s Square, normally bustling with tourists, as the highest tide in 50 years swept through. The “Floating City” of bridges, vaporetti, and gondolas is hardly a stranger to high tides. Venetians are accustomed to acqua alta, or “high water,” arriving in the fall. The rising saltwater presents a threat to the city’s prized architecture, including wall paintings and frescoes from the Renaissance. What happened when Venice, the ‘Floating City,’ sank. Flooding in Venice is not a new phenomenon, but the deluge that temporarily sank the “Floating City” this week was the worst Venetians have experienced in more than 50 years. 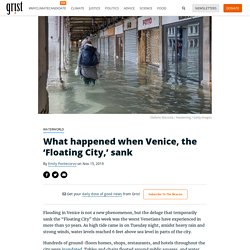 As high tide came in on Tuesday night, amidst heavy rain and strong winds, water levels reached 6 feet above sea level in parts of the city. Hundreds of ground-floors homes, shops, restaurants, and hotels throughout the city were inundated. Tables and chairs floated around public squares, and water taxis became stranded along the plazas. Italy has declared a state of emergency in Venice as the city assesses the damage and braces itself for continued high tides in the coming days. Sea-level rise threatens 13 million Americans. Can FEMA help? Entrepreneur and presidential hopeful Andrew Yang caught flak at the second Democratic debate in July for saying that the time has come to move Americans living in the path of sea-level rise to higher ground. 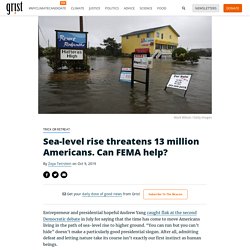 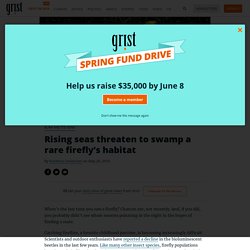 Chances are, not recently. And, if you did, you probably didn’t see whole swarms pulsating in the night in the hopes of finding a mate. Atlantic City can’t afford to roll the dice on sea-level rise. Atlantic City, the once-proud gambling and resort destination, is treading water. 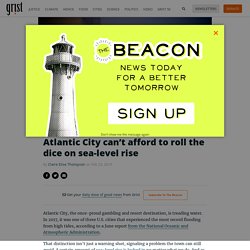 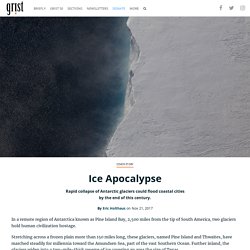 Stretching across a frozen plain more than 150 miles long, these glaciers, named Pine Island and Thwaites, have marched steadily for millennia toward the Amundsen Sea, part of the vast Southern Ocean. Further inland, the glaciers widen into a two-mile-thick reserve of ice covering an area the size of Texas. La Polynésie sauve son «Fonds vert» One year after the Great Flood, Louisiana’s most vulnerable cope with the losses. The summertime rain that usually pounds Louisiana in fits and starts had been falling for a day and through the night when Shantel Smith’s phone rang. 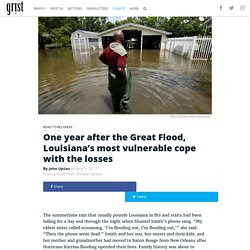 “My oldest sister called screaming, ‘I’m flooding out, I’m flooding out,’” she said. “Then the phone went dead.” Smith and her son, her sisters and their kids, and her mother and grandmother had moved to Baton Rouge from New Orleans after Hurricane Katrina flooding upended their lives. Family history was about to repeat. Smith and a brother-in-law drove a pickup through flooded streets to help. It’s been flooding a lot lately and new research might explain why. According to a new study from the nonprofit Environmental Integrity Project, the current presidential administration has collected fewer civil penalties and filed fewer environmental enforcement suits against polluting companies than the Obama, Clinton, and George W.

Bush administrations did at the same point in office. The analysis assesses agreements made in the Environmental Protection Agency’s civil enforcement cases. For abuses under laws like the Clean Air Act, the Trump administration has collected just $12 million in civil penalties, a drop of 60 percent from the average of the other administrations. Trump’s EPA has lodged 26 environmental lawsuits compared to 31, 34, and 45 by Bush, Obama, and Clinton, respectively. The marked decrease in enforcement likely has to do with the EPA’s deregulatory agenda. Comment l’élévation du niveau de la mer bouleverse la carte du monde. The Sea Level Is Rising 50 Percent Faster These Days. Sea levels are rising – that much you probably already know. What may come as more of a shock to you is how much faster the sea level is rising compared to even 20 years ago. Scientists have measured a rapidly increasing pace, threatening to put islands and coastal areas underwater even sooner than anticipated.

According to a new study published in the Nature Climate Change journal, the rate of sea level rise has gone up by about 50 percent over the past two decades. Back in 1993, the sea level rose 2.2 millimeters that year. In 2014, however – which is the most recent year these measurements are available – the sea level ticked up 3.3 millimeters. The sea is rising three times faster than we thought. If cities are the future of sustainability, they can’t only be green — they have to be livable, too. Enter Ritchie Torres, New York City’s youngest elected official, hell-bent on making the city more affordable for its most vulnerable inhabitants. Torres, who is Afro-Latino and the first openly LGBT politician from the Bronx, cut his political teeth as a tenant organizer. He ran for city council in 2013 at the behest of a mentor who saw potential in the self-described introvert — and won. Reassessment of 20th century global mean sea level rise. Author Affiliations Edited by Anny Cazenave, Centre National d'Etudes Spatiales, Toulouse Cedex 9, France, and approved April 17, 2017 (received for review September 28, 2016) Significance Estimates of global mean sea level (GMSL) before the advent of satellite altimetry vary widely, mainly because of the uneven coverage and limited temporal sampling of tide gauge records, which track local sea level rather than the global mean.

As New Jersey’s flooding crisis intensifies, low-income people feel the worst impacts. Coastal communities are enduring growing flood risks from rising seas, with places like Atlantic City, sandwiched between a bay and the ocean, facing some of the greatest threats. Guided by new research by Climate Central’s Scott Kulp and Benjamin Strauss, reporter John Upton and photographer Ted Blanco chronicled the plight of this city’s residents as they struggle to deal with the impacts. Upton spent months investigating how the city is adapting, revealing vast inequity between the rich and the poor. First Mammal Goes Extinct From Manmade Climate Change. We’ve reached a sad milestone: Climate change has claimed its first mammal species. Scientists have been warning us that a large percentage of species will face extinction thanks to manmade global warming, and the future is unfortunately here. According to The Guardian, climate change’s first mammal victim was an adorable rodent known as the Bramble Cay melomys.

Atlantic coastline sinks as sea levels rise. The 5,000 North Carolinians who call Hyde County home live in a region several hundred miles long where coastal residents are coping with severe changes that few other Americans have yet to endure. Geological changes along the East Coast are causing land to sink along the seaboard. Say goodbye to major cities if these scientists are right about Antarctica’s collapsing ice.

What Earth would look like if the ice melted - Business Insider. Good news and bad news about rising seas. Here’s what your city will look like when the ice sheets melt. Seas are rising in weird, new ways. Watch this adorable climate scientist explain sea-level rise with a gin & tonic. Sea-level rise is already eating our coasts. Climate change is washing WWII soldiers from their graves. Climate change is flooding out American coastlines. The U.S. cities with the worst climate change-related flooding. Dreading water: Should coastal communities bear the cost of future floods? EI_EcoPictures : Borrowed Time on Disappearing... RODANTHE: While the seas rise in the Outer Banks and elsewhere in NC, science treads water. Louisiana’s coastline is disappearing too quickly for mappers to keep up.