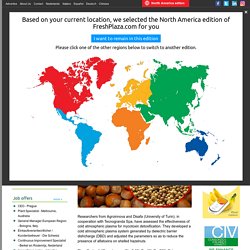 Hazelnuts (Corylus avellana L.) - Tonda Gentile Trilobata cultivar - are widely cultivated in Piedmont, where they adapt well to the continental climate and reach excellent quality. The confectionery industry processes 90% of the domestic production, while the remaining 10% is consumed fresh, both in-shell and shelled. The former are generally used for fresh consumption, while the latter are used as a raw material by the food and cosmetic industries. Hazelnuts can be contaminated by fungal species, part of the Aspergillus genus, that can produce aflatoxins. In particular, A. parasiticus can produce four aflatoxins (B1, B2, G1, G2), while A. flavus can only produce B1 and B2. PROCESS 23/02/15 Le plasma froid décontamine les fruits et légumes frais. 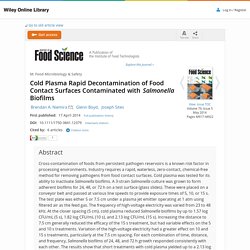 Industry requires a rapid, waterless, zero-contact, chemical-free method for removing pathogens from food contact surfaces. Cold plasma was tested for its ability to inactivate Salmonella biofilms. A 3-strain Salmonella culture was grown to form adherent biofilms for 24, 48, or 72 h on a test surface (glass slides). These were placed on a conveyor belt and passed at various line speeds to provide exposure times of 5, 10, or 15 s. The test plate was either 5 or 7.5 cm under a plasma jet emitter operating at 1 atm using filtered air as the feed gas. Practical Application Pathogens such as Salmonella can form chemical-resistant biofilms, making them difficult to remove from food contact surfaces. 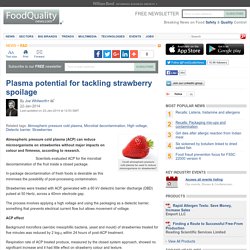 In-package decontamination of fresh foods is desirable as this minimises the possibility of post-processing contamination. Strawberries were treated with ACP, generated with a 60 kV dielectric barrier discharge (DBD) pulsed at 50 Hertz, across a 40mm electrode gap. The process involves applying a high voltage and using the packaging as a dielectic barrier, something that prevents electrical current flow but allows movement of voltage. ACP effect Background microflora (aerobic mesophillic bacteria, yeast and mould) of strawberries treated for five minutes was reduced by 2 log10 within 24 hours of post-ACP treatment. 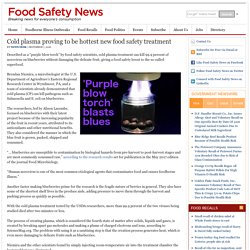 Brendan Niemira, a microbiologist at the U.S. Department of Agriculture’s Eastern Regional Research Center in Wyndmoor, PA, and a team of scientists already demonstrated that cold plasma (CP) can kill pathogens such as Salmonella and E. coli on blueberries. The researchers, led by Alison Lacombe, focused on blueberries with their latest project because of the increasing popularity of the fruit in recent years, attributed to its antioxidants and other nutritional benefits. They also considered the manner in which the blue fruit is grown, packed, shipped and consumed. “Human norovirus is one of the most common etiological agents that contaminates food and causes foodborne illness.” Brendan Niemira (To sign up for a free subscription to Food Safety News, click here.) 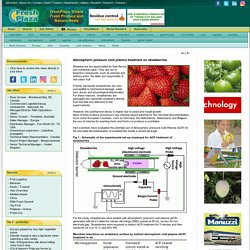 They are rich in bioactive compounds, such as phenols and anthocyanins, the latter are responsible of red colour fruit. Freshly harvested strawberries are very susceptible to mechanical damage, water loss, decay and physiological deterioration. For these reasons, strawberries are packaged into clamshell containers directly from the field and delivered to the supermarkets. However, the postharvest decay is mainly due to yeast and mould growth.Most of fresh produce processors use chlorine-based washing for the microbial decontamination, but in some European Countries, such as Germany, the Netherlands, Switzerland, and Belgium, the use of chlorine for washing fresh and fresh-cut produce is prohibited.

FOOD ONLINE 26/12/14 Cold Plasma Technology Will Benefit The Food-Processing Industry. By Sam Lewis, associate editorFollow Me On Twitter @SamIAmOnFood This new technology may prove to be the most-effective means of microbial intervention in food while also being a money and time-saving phenomenon Meat and poultry contributes to approximately 22 percent of the estimated 9.6 million foodborne illnesses occurring each year. 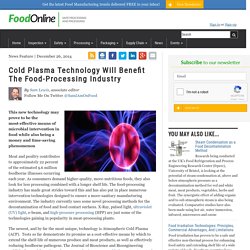 As consumers demand higher-quality, more-nutritious foods, they also look for less processing combined with a longer shelf life. The food-processing industry has made great strides toward this and has also put in place numerous intervention technologies designed to ensure a more-sanitary manufacturing environment. The industry currently uses some novel processing methods for the decontamination of food and food contact surfaces. The newest, and by far the most unique, technology is Atmospheric Cold Plasma (ACP). ACP has its origins in the physics of the universe. Food Control Volume 60, February 2016, Atmospheric cold plasma process for vegetable leaf decontamination: A feasibility study on radicchio (red chicory, Cichorium intybus L.)

FOOD SCIENCE & TECHNOLOGY 28/02/14 Cold plasma – decontamination for the food industry. Danny Bayliss and James Walsh discuss the potential use of cold plasma technology in the food industry particularly for disinfecting surfaces of processing equipment and, potentially, food itself Food industry challenges Consumers expect that the food they consume is safe to eat. 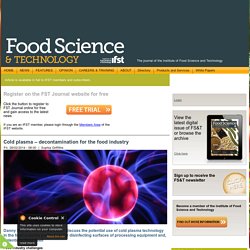 In addition, the consumer also wants the food to have high nutritional value with minimal preparation times, as evidenced by the growth in products such as convenience ready-to-eat (RTE) foods and minimally processed fresh produce. In order to meet these demands, food manufacturers are looking for new methods and technologies. IPCBEE vol.33 (2012) © (2012) Atmospheric Pressure Plasma Technology: A New Tool for Food Preservation. BBSRC 17/09/12 Assessing a new technique for ensuring fresh produce remains Salmonella-free. Researchers at the Institute of Food Research have tested a new technique to ensure fresh produce is free of bacterial contamination. 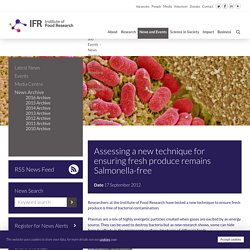 Plasmas are a mix of highly energetic particles created when gases are excited by an energy source. They can be used to destroy bacteria but as new research shows, some can hide from its effects in the microscopic surface structures of different foods. Eating fresh fruit and vegetables is promoted as part of a healthy lifestyle, and consumers are responding to this by eating more and in a greater variety. Ensuring fruit and vegetables are free from contamination by food poisoning bacteria is crucial, as they are often eaten raw, without cooking or processing that kills off bacteria. 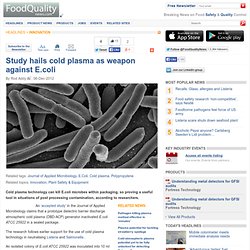 An ‘accepted study’ in the Journal of Applied Microbiology claims that a prototype dielectric barrier discharge atmospheric cold plasma (DBD-ACP) generator inactivated E.coli ATCC 25922 in a sealed package. The research follows earlier support for the use of cold plasma technology in neutralising Listeria and Salmonella . An isolated colony of E.coli ATCC 25922 was inoculated into 10 ml tubes containing tryptic soy broth and incubated overnight at 37°C.The overnight culture (18 hours) was harvested by centrifugation at 8720 g for 10 minutes.

After samples were washed in sterile phosphate buffered solution (PBS), prepared and sample density was adjusted, a working concentration of samples was dispensed into the wells of a microtiter plate. Plasma discharge Each container was then sealed with the high barrier polypropylene bag. 1. FOOD PRODUCTION 03/01/12 Cold plasma shows potential for Listeria reduction in packaged RTE foods - research. Cold atmospheric pressure plasma (CAPP) treatment shows potential as a way of reducing Listeria monocytogenes contamination on the surface of pre-packaged ready-to-eat (RTE) foods, according to new research. 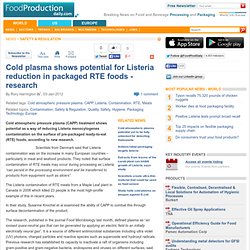 Scientists from Denmark said that Listeria contamination was on the increase in many European countries – particularly in meat and seafood products. They noted that surface contamination of RTE meats may occur during processing as Listeria “can persist in the processing environment and be transferred to products from equipment such as slicers”.

The Listeria contamination of RTE meats from a Maple Leaf plant in Canada in 2008 which killed 23 people is the most high-profile example of this in recent years. In their study, Susanne Knochel et al examined the ability of CAPP to combat this through surface decontamination of the product. Methodology and results Multiple treatments at 15.5and 62 W for 20 seconds at 10 minute intervals increased reductions further. J Food Process Technol 2012, 3:9 Novel Decontamination Technologies for Fresh-cut Industry.