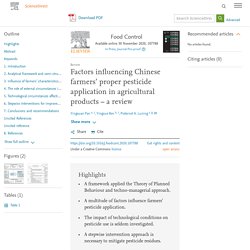 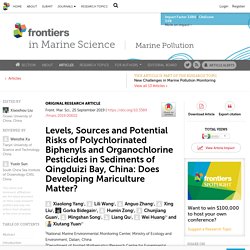 Int. J. Environ. Res. Public Health 2019, 16(14), 2586; Types of Exposure Pesticide Poisoning in Jiangsu Province, China; The Epidemiologic Trend between 2006 and 2018. Background: Pesticide poisoning is an important issue in rural China, and is also a major public health problem that affects the health of farmers. 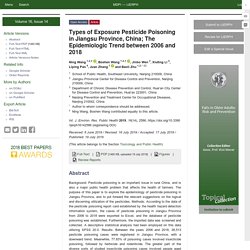 The purpose of this paper is to explore the epidemiology of pesticide poisoning in Jiangsu Province, and to put forward the relevant suggestions on the logical and discerning utilization of the pesticides. Methods: According to the data of the pesticide poisoning report card established by the health hazard detection information system, the cases of pesticide poisoning in Jiangsu Province from 2006 to 2018 were exported to Excel, and the database of pesticide poisoning was established. Furthermore, the imported data was screened and collected. A descriptive statistical analysis had been employed on this data utilizing SPSS 20.0. BMC PUBLIC HEALTH 03/04/19 Relationship between cumulative exposure to pesticides and sleep disorders among greenhouse vegetable farmers (Chine) This study revealed that adverse associations between CEI and sleep problems among greenhouse vegetable farmers. 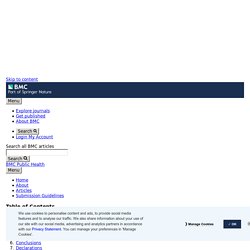 Due to the natural environmental and socioeconomical limitations in Northwest China, the local government authorities encouraged farmers to engage in jobs related to the production of greenhouse vegetables to satisfy the huge demands of the local residents for fresh vegetables. Farmers working in greenhouses would have increased CEI due to the warm, humid climate and long-term, frequent pesticide use [44], and consequently, high pesticide exposure is a risk to farmers in greenhouses that should be a public health concern.

Short sleep duration was significantly associated with high CEI, and nonsignificant results occurred for long sleep duration. Although exposure to carbofuran was associated with sleep apnea in 1569 U.S. male farmers in a previous report [31], a nonsignificant relationship between pesticide exposure and sleep apnea was observed in the present study. Journal of Food and Drug Analysis Available online 3 July 2018 Prioritization of pesticides in crops with a semi-quantitative risk ranking method for Taiwan postmarket monitoring program. 1. 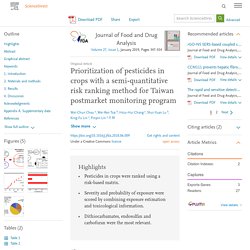 Introduction Control of pesticide hazards is important because pesticides are suspected to be associated with a broad spectrum of adverse health effects [1], [2]. Monitoring of pesticides has been conducted in food safety marketing programs to ensure compliance with the maximum permissible residue levels (MRLs) of pesticides in food [3]. However, a wide range of pesticides may be present in crops, and commonly, there are insufficient resources to manage all the pesticides at any given time. Therefore, a monitoring program should use the risk-based approach, allowing efficient resource allocation for specifically targeting the pesticides that pose the greatest human health risk. The risk-based prioritization strategy has been used for a long time to rank chemicals that pose a health risk [5]. 3. Int. J. Environ. Res. Public Health 2018, 15(5), 931; Association between Organochlorine Pesticide Levels in Breast Milk and Their Effects on Female Reproduction in a Taiwanese Population. 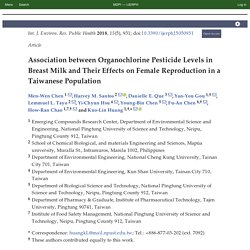 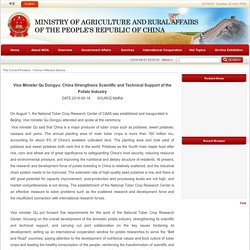 Vice minister Qu Dongyu attended and spoke at the ceremony. Vice minister Qu said that China is a major producer of tuber crops such as potatoes, sweet potatoes, cassava and yams. The annual planting area of main tuber crops is more than 160 million mu, accounting for about 8% of China’s available cultivated land. The planting area and total yield of potatoes and sweet potatoes both rank first in the world. It gets to know that the National Tuber Crop Research Center is a national-level public potato research platform based on integrating research forces of CAAS in potatoes and sweet potatoes. Related Accessories： CFS_GOV_HK 24/08/18 Pesticide residue exceeds legal limit in banana sample. NATURE 25/06/18 A comparison of the effects of agricultural pesticide uses on peripheral nerve conduction in China. 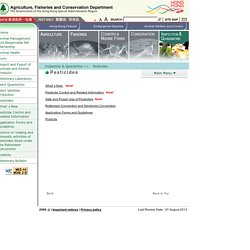 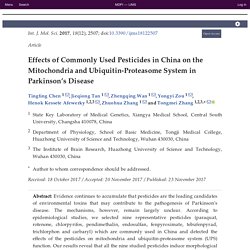 Introduction Parkinson’s disease (PD) is a progressive neurodegenerative movement disorder affecting approximately 2% of people aged over 65. It is pathologically characterized by pronounced loss of dopaminergic neurons in the substantia nigra of the midbrain and formation of ubiquitin-positive Lewy body aggregates [1,2]. Epidemiological studies indicate both environmental neurotoxins and genetic predisposition as potential risk factors for PD.

Evidence continues to accumulate that pesticides are the leading candidates of environmental toxins that may contribute to the pathogenesis of PD [3,4]. Longicorne asiatique en CHINE. AGRICULTURAL ECONOMICS 24/05/16 Farmers’ risk preferences and pesticide use decisions: evidence from field experiments in China. China faces health and environmental problems associated with the use of agricultural chemicals, including pesticides. 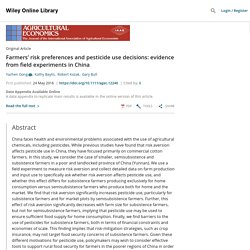 We find that risk aversion significantly increases pesticide use, particularly for subsistence farmers and for market plots by semisubsistence farmers. PLOS 13/02/14 Prenatal Exposure to Organophosphate Pesticides and Neurobehavioral Development of Neonates: A Birth Cohort Study in Shenyang, China. Abstract Background A large amount of organophosphate pesticides (OPs) are used in agriculture in China every year, contributing to exposure of OPs through dietary consumption among the general population. However, the level of exposure to OPs in China is still uncertain. Objective To investigate the effect of the exposure to OPs on the neonatal neurodevelopment during pregnancy in Shenyang, China. PLOS 04/06/15 Long- and Short-Term Health Effects of Pesticide Exposure: A Cohort Study from China.

Abstract Pesticides are extensively used by farmers in China. However, the effects of pesticides on farmers’ health have not yet been systematically studied. This study evaluated the effects of pesticides exposure on hematological and neurological indicators over 3 years and 10 days respectively. Environmental Health and Preventive Medicine 14/02/18 Estimated assessment of cumulative dietary exposure to organophosphorus residues from tea infusion in China. For almost 4000 years, tea has been prepared by processing the leaves of the Camellia sinensis plant for consumption in the form of an infusion [1, 2]. China has one of the world’s longest histories of tea production. Depending on how the leaves are processed, three main types of tea can be produced: non-fermented tea, e.g. green tea; semi-fermented tea, e.g. oolong tea; and fermented tea, e.g. black tea [3].

Tea leaves have been found to contain compounds beneficial to human health, such as polyphenols [4, 5]. However, tea leaves may also contain hazardous compounds, such as pesticide residues and mycotoxins [6]. BMC PUBLIC HEALTH 28/06/17 Childhood pesticide poisoning in Zhejiang, China: a retrospective analysis from 2006 to 2015. We analyzed the epidemiological characteristics of child pesticide poisoning in this study and our work revealed that pesticide poisoning occurred mostly in rural areas which was consistent with reports in China and other countries [28–30]. This was attributed to common pesticide usage related to agricultural activities in these areas.

Pesticides are easily available to rural families. Organophosphate and carbamate insecticides were the most common pesticides causing child pesticide poisoning in our study, which may be due to their common usage in agriculture and hence their easy availability. Science of The Total Environment Volume 542, Part A, 15 January 2016, Pesticides in persimmons, jujubes and soil from China: Residue levels, risk assessment and relationship between fruits and soils. Procedia Environmental Sciences Volume 13, 2012, Risk evaluation of groundwater pollution by pesticides in China: a short review.

B.H. Li, Z.Y. Ren, H.H. Chen, X.J. Cao, F. Journal of Integrative Agriculture Volume 14, Issue 11, November 2015, Management of pesticide residues in China. Environment International Volume 81, August 2015, Pesticide levels and environmental risk in aquatic environments in China — A review. 1. Introduction Pesticides have been widely applied to protect agricultural crops since the 1940s, and since then, their use has increased steadily. The organochlorine pesticides (OCPs) became the dominant pesticides after the Second World War.

The first part is dedicated to the "safer" pesticides derived from natural materials, the design and the optimization of pesticides formulations, and the techniques for pesticides application. UNIVERSITY OF WAGENINGEN - DEC 2006 - Kick the pesticide habit: forces affecting pesticide use and pesticide policy in the fring. WILSON CENTER 28/02/07 A CHINA ENVIRONMENTAL HEALTH PROJECT FACTSHEETPesticides and Environmental Health Trends in China. PUBARTICLES 19/09/11 Pesticide Export and Import Rise in July 2011. By ccminternational : A how to tutorial about pesticide, flurorine, glyphosate, [+]Business with step by step guide from ccminternational. [^] According to the statistic data from China National Bureau of Statistics (CNBS), China's pesticide output in July 2011 reached 214,530 tonnes, up 9.5% year on year.