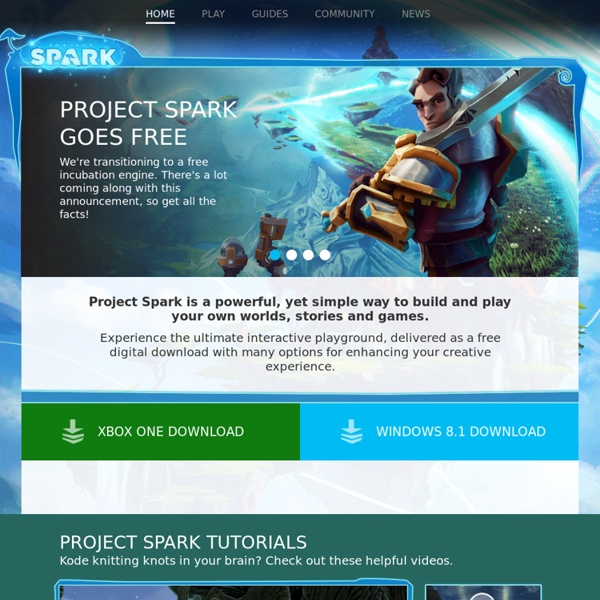 Scratch Developed by the Lifelong Kindergarten with the MIT's Media Lab research group, Scratch is a new programming language that facilitates the creation of interactive, cartoons, games, musical compositions of stories, simulations and their shares on the Web. Scratch is a free software designed to introduce students from the age of 8, to fundamental concepts in mathematics and computer science. It is based on a fun of algorithmic approach, to help them to create, to reason and to cooperate. It also promotes the sharing on the Web. From 2007, the website was opened to allow everyone on the one hand to publish, so sharing its projects on the Web, and on the other hand to provide assistance to the implementation of Scratch. I - A.

App Inventor Code Snippets This page lists useful code snippets for App Inventor. These and more Examples you can find at the Tutorials page Construct 2 Modern. Highly capable. Versatile. This is the all-in-one tool to build and ship your games globally. Simple And Powerful Blocks Construct's unique block-based approach is a simple and exciting way to start designing games. MIT App Inventor Get Started Follow these simple directions to build your first app! Tutorials Step-by-step guides show you how to create even more apps. Teach 12 Sites and Apps for Learning to Code When the conversation amongst educators turns to programming, Scratch is often the first resource that is mentioned. Scratch allows students to program animations, games, and videos through a visual interface. Students create their programs by dragging together blocks that represent movements and functions on their screens. The blocks snap together to help students see how the "if, then" logic of programming works. If you haven't seen Scratch before, watch the short overview in the video below.

Python Design Patterns Guide Let’s say it again: Python is a high-level programming language with dynamic typing and dynamic binding. I would describe it as a powerful, high-level dynamic language. Many developers are in love with Python because of its clear syntax, well structured modules and packages, and for its enormous flexibility and range of modern features. In Python, nothing obliges you to write classes and instantiate objects from them. Scratch Curriculum Guide An introductory computing curriculum using Scratch. What is Creative Computing? Creative computing is...creativity. Computer science and computing-related fields have long been introduced to young people in a way that is disconnected from their interests and values – emphasizing technical detail over creative potential. Creative computing supports the development of personal connections to computing, by drawing upon creativity, imagination, and interests. Creative computing is...empowerment.

Europe Code Week 360° virtual tour creation with CoSpaces_Edu The objective of this lesson plan is to create different Virtual Reality brochures or touristic guides in which students show their knowledge of their community, their city, a culture, or a civilization. This lesson involves getting students to do a significant amount of research and data collection, organize the information they gathered, and decide how to best present it in narrated or written format.CoSpaces Edu allows students to use 360° degree images onto which complementary information can be added through different types of icons or shapes available on the web or on the platform itself.The use of this type of visuals and the creation of 360° walks or itineraries is absolutely fantastic for class.

Design Patterns: Command in Python Command is behavioral design pattern that converts requests or simple operations into objects. The conversion allows deferred or remote execution of commands, storing command history, etc. Usage of the pattern in Python Complexity: Popularity: Usage examples: The Command pattern is pretty common in Python code. Command Design Pattern In Python - Sean Bradley - Medium This is Part 1 of the Command Design Pattern in Python. Go to Part 2 (Implementing UNDO/REDO) The command pattern is a behavioural design pattern, in which an abstraction exists between an object that invokes a command, and the object that performs it.