Go Beyond One Hour 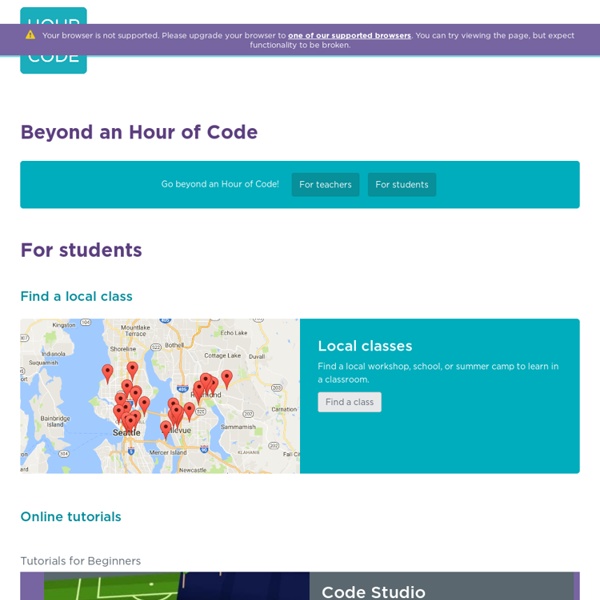 Thomasville Times On Tuesday Thomasville High School students joined tens of millions of students from across the world to participate in an international campaign titled “Hour of Code.” During their first block of classes, students from every grade had the opportunity to try computer coding for one hour by simply logging on to the web-site Code.org, and following self-guided video tutorials. Designed to promote computer science education in the classroom, the week long, nationwide effort gives every student — regardless of grade, academic interest or access to technology an introduction to the basics of computer science through hands-on activities that demystify coding, proving that creating a phone app or computer game is not as difficult and challenging as it may seem. According to Higgins, females and minorities are severely under-represented in the field of computer science.

Protein Data Bank - RCSB PDB A Structural View of Biology This resource is powered by the Protein Data Bank archive-information about the 3D shapes of proteins, nucleic acids, and complex assemblies that helps students and researchers understand all aspects of biomedicine and agriculture, from protein synthesis to health and disease. As a member of the wwPDB, the RCSB PDB curates and annotates PDB data. The RCSB PDB builds upon the data by creating tools and resources for research and education in molecular biology, structural biology, computational biology, and beyond. Grok Learning Hour of Code™ is a campaign to show that anyone can learn the basics of coding and become a maker, a creator, an innovator. It’s a one-hour introduction to computer science, designed to demystify "code". We’re targeting our activities at secondary school students, but anyone is free to participate. Our Hour of Code activities can be completed in class, or at home; on your own, with friends, or with the help of your teacher. They are designed for complete beginners.

Run Marco! The next chapters of the story are coming soon! Jungle Sequence of commands, iterations, conditions Ancient Temple Variables, memory, simple data-structures Top 10 of 2014, No. 8: Coding eSchool News highlights some of the 10 most significant ed-tech developments of 2014, and coding is No. 8 Each year, the eSchool News editors compile 10 of the most influential ed-tech developments and examine how those topics dominated K-12 ed-tech conversations. No. 8 on our list for 2014 is coding.

Hour of Code Before you can teach, you also need to learn! We've got just the tools for you to jump right in and get your head round coding in LiveCode. We’ve produced 60 short "how to" tutorial videos, all between 3 - 5 minutes long, focused on specific areas of LiveCode. You'll love it. Introduction to LiveCode 11 coding resources for the Hour of Code “Computer science is the way the world is going—it’s the new literacy,” she said. “Not only does it teach you have to program the machines we’re using today, it also teaches you a whole different set of problem-solving skills.” Fewer schools teach computer science now than 10 years ago, though, despite the prediction that more than half of new jobs (60 percent) in all of the sciences will be computing jobs. Bringing computer science education to younger grades will help combat the common middle school mentality that students view themselves as “no good” at coding.

How to Write a Simple Batch (BAT) File Advertisement Batch files are the computer handyman’s way of getting things done. They can automate everyday tasks, shorten the required time to do something, and translate a complex process into something anyone could operate. In this article, I’ll show you how to write a simple batch file. You’ll learn the basics of what batch files can do and how to write them yourself. Welcome, Inventors! Follow these four short videos and you'll have three working apps to show for it! After building the starter apps, which will take around an hour, you can move on to extending them with more functionality, or you can start building apps of your own design. Get started now with Video 1 below.