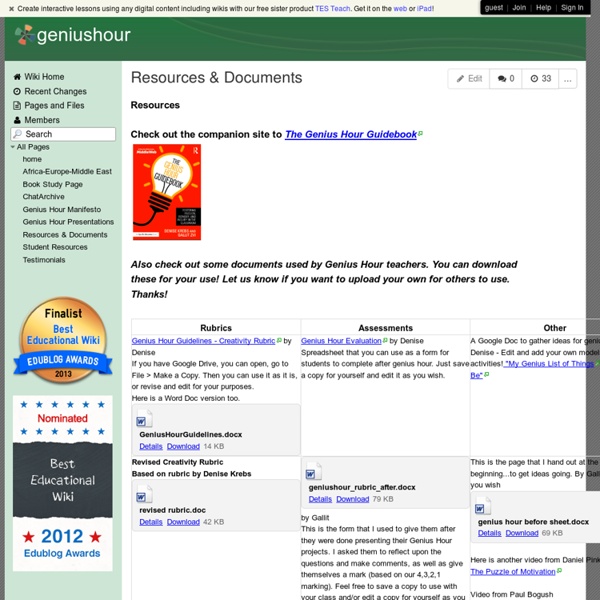 6 Simple Strategies to Help Find Your Passion Two years ago at this time during the school year my students and I had a similar problem: There wasn’t an opportunity for me to find out what they really enjoyed doing, and most of them did not know what they were interested in. They had been conditioned to do what is asked of them in school – and that was it. We decided it was time to change the content, while still focusing on the skills they needed to learn. That January we began our 20% projects, and my teaching career changed forever. What I didn’t expect to change was also my mindset. Finding Your Passion Can Be a Long Road Some people know what their passion in life is intrinsically. 1. This is a big one. What do I do on weekend mornings? Then you are going to have to analyze the results. If there is anything you do during these times that is considered “creating” or “making” be sure to star that on your list. 2. If you are anything like me, then you get off task all the time. 3. 4. Do you have 64 interests? 5. 6.

Give your students 20% time to do whatever they want | I teach. I think. "Seriously? You're going to let us do whatever we want for 20% of our time in English class?" "I'm skeptical." "That's awesome." Taking Google's lead, and inspired by Dan Pink's book, Drive, I decided to take the plunge and give my students the kind of radical autonomy they both suggest, and I gave my students 20% of their time in my English class to pursue a project of their choosing. Rules and expectations Project ideas build a tutoring network of high school students helping middle school studentsdesign a complex videogame map using Valve's SDKstart a business selling originally designed t-shirts and accessorieslaunch a web-design start-up for local organizations and businesseswrite a graphic novelmake a stop-motion animated movie of a scene from Macbethwrite a backpacking guide for teenage girlsinterview local senior citizens and document their historyrecord and produce a full-length album Failure is an option Here is a video of clips from their final 20% talks. My own successful failures

Plastic Dinosaurs As plastic is made from oil and oil is made from dead dinosaurs, how much actual real dinosaur is there in a plastic dinosaur? Steve Lydford I don't know. Coal and oil are called "fossil fuels" because they formed over millions of years from the remains of dead organisms buried underground. Except that's not quite right. Most of us only see oil in its refined forms—kerosene, plastics, and the stuff that comes out of gas pumps—so it's easy to imagine the source as some uniform black bubbly material. But fossil fuels bear fingerprints of their creation. The dead matter carries its story—altered and jumbled in various ways—for millions of years. The story carried by rocks is a complicated one. Most oil comes from ocean life buried on the seabed. These conditions are most often met in shallow seas near continental shelves, where periodic nutrient-rich upwellings from the deep sea cause blooms of plankton and algae. This paints a picture like this: