Could These 3 Simple Changes to Banking Fix the Economy? 'The Corrupt Banking System' by Victoria Grant. Chicago Fed Study Blasts the Lid Off of High Frequency Trading. We hear all sorts of reasons why the little guy won't buy stocks these days but the below graph, courtesy of a Chicago Fed study, might explain a lot of it. 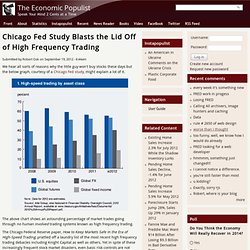 The above chart shows an astounding percentage of market trades going through no human involved trading systems known as high frequency trading. The Chicago Federal Reserve paper, How to Keep Markets Safe in the Era of High-Speed Trading, prattled off a laundry list of the most recent high frequency trading debacles including Knight Capital as well as others. Yet in spite of these increasingly frequent stock market disasters, even basic risk controls are not implemented. Why? They claim it would slow down their trading systems. Industry and regulatory groups have articulated best practices related to risk controls, but many firms fail to implement all the recommendations or rely on other firms in the trade cycle to catch an out-of-control algorithm or erroneous trade. Ron Paul: Iceland Dismantles Corrupt Gov't Then Arrests All Rothschild Bankers... Peter Schiff: We aren't that far behind Greece. Corporations are primarily intellectual property rentiers.

Gavin Mueller has a great article in the summer issue of Jacobin Magazine about piracy, and at one point drops this jaw-dropping statistic: “Intellectual property makes up 80 percent of the net worth of US corporations and 60 percent of their exports.” 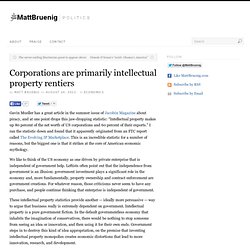 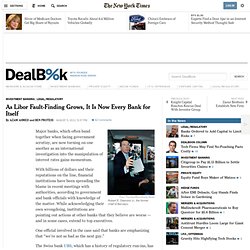 Diamond Jr., the former chief of Barclays. Major banks, which often band together when facing government scrutiny, are now turning on one another as an international investigation into the manipulation of interest rates gains momentum. With billions of dollars and their reputations on the line, financial institutions have been spreading the blame in recent meetings with authorities, according to government and bank officials with knowledge of the matter. MY2iA.jpg (1013×5581) From an Unlikely Source, a Serious Challenge to Wall Street. It's over for the banking cabal. 4.jul.2012. "A Global Perfect Storm" by Nouriel Roubini. Exit from comment view mode. 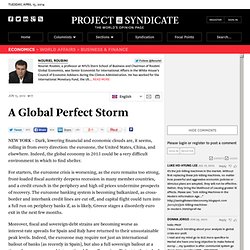 Click to hide this space NEW YORK – Dark, lowering financial and economic clouds are, it seems, rolling in from every direction: the eurozone, the United States, China, and elsewhere. Indeed, the global economy in 2013 could be a very difficult environment in which to find shelter. For starters, the eurozone crisis is worsening, as the euro remains too strong, front-loaded fiscal austerity deepens recession in many member countries, and a credit crunch in the periphery and high oil prices undermine prospects of recovery.

The eurozone banking system is becoming balkanized, as cross-border and interbank credit lines are cut off, and capital flight could turn into a full run on periphery banks if, as is likely, Greece stages a disorderly euro exit in the next few months. Moreover, fiscal and sovereign-debt strains are becoming worse as interest-rate spreads for Spain and Italy have returned to their unsustainable peak levels. Young Wall Street Traitor Joins Occupy Wall Street. Wall Street “Quant” Alexis Goldstein joins the opposition Wall Street recruits young, just out of college computer science majors and mathematicians to become “quants” whose skills are used among other things to predict when pension funds are going to make huge trades so that Wall Street can jump in ahead of them and do deals effectively raising the price the pension fund must pay or lowering the profit they might make. 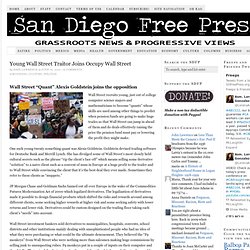 One such young twenty something quant was Alexis Goldstein. Goldstein devised trading software for Deutsche Bank and Merrill Lynch. Iceland proves that bailing out the middle class works better than bailing out banks - The Young Turks with Cenk Uygur. To Our Faithful Current.com Users:

Out of the Mouths of Babes: Twelve-Year-Old Money Reformer Tops a Million Views. The youtube video of 12 year old Victoria Grant speaking at the Public Banking in America conference last month has gone viral, topping a million views on various websites. 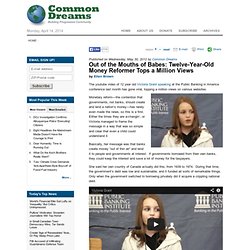 Monetary reform—the contention that governments, not banks, should create and lend a nation’s money—has rarely even made the news, so this is a first. Either the times they are a-changin’, or Victoria managed to frame the message in a way that was so simple and clear that even a child could understand it. Basically, her message was that banks create money “out of thin air” and lend it to people and governments at interest. How the "Job Creators" REALLY Spend Their Money. The Austerity Agenda.

“The boom, not the slump, is the right time for austerity.” 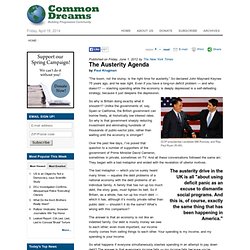 So declared John Maynard Keynes 75 years ago, and he was right. Even if you have a long-run deficit problem — and who doesn’t? 84% of All Stock Trades Are By High-Frequency Computers … Only 16% Are Done By Human Traders. Lifting the Veil - A New World Society. Don't Tax the Rich, Smash Their Privilege: A Response to Warren Buffett. Recently the progressive blogosphere was abuzz with approving links to billionaire investor Warren Buffett's latest New York Times op-ed, "Stop Coddling the Super Rich. 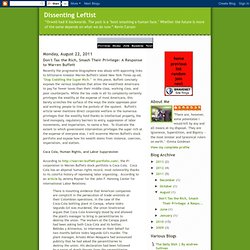 " In this piece, Buffett concisely exposes the various loopholes that allow the wealthiest Americans to pay far fewer taxes than their middle class, working class, and poor counterparts. While the tax code in all its complexity certainly privileges the wealthy at the expense of most Americans, this barely scratches the surface of the ways the state oppresses poor and working people to line the pockets of the opulent. Buffett's article never mentions direct corporate welfare or the numerous privileges that the wealthy hold thanks to intellectual property, the land monopoly, regulatory barriers to entry, suppression of labor movements, and imperialism, to name a few.

Coca Cola, Human Rights, and Labor Suppression According to the #1 corporation in Warren Buffet's stock portfolio is Coca Cola. Further reading: Five Reasons Why The Very Rich Have NOT Earned Their Money. The wealthiest Americans believe they've earned their money through hard work and innovation, and that they're the most productive members of society. 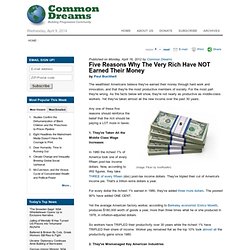 For the most part they're wrong. As the facts below will show, they're not nearly as productive as middle-class workers. Yet they've taken almost all the new income over the past 30 years. Buttonwood: Marginal improvement. "Captured Europe" by Simon Johnson. Exit from comment view mode. Click to hide this space WASHINGTON, DC – Europe’s policy elite – the people who call the shots at the national and eurozone level – are in serious trouble. Market exchange rules responsible for wealth concentration, physicists say. Two Brazilian physicists have shown that wealth concentration invariably stems from a particular type of market exchange rules -- where agents cannot receive more income than their own capital.

The authors concluded that maximum inequalities ensue from free markets, which are governed by such seemingly fair rules. This study, published in European Physical Journal B, was conducted by J. Roberto Iglesias and Rita de Almeida from the Brazilian National Institute of Science and Technology of Complex Systems, based in Porto Alegre. Americans Will Need “Black Markets” To Survive. As Americans, we live in two worlds; the world of mainstream fantasy, and the world of day-to-day reality right outside our front doors. One disappears the moment we shut off our television. The other, does not… I fear for a social explosion: Greeks can't take any more punishment. Helena Smith, who has reported from Athens for more than 20 years, says the country is on the edge of a precipice Despair has enveloped Greece. This weekend the bankrupt nation, for that is what it is, began negotiating the latest act of a drama that many fear will end in catastrophe – financially, socially and politically.

In an electric atmosphere, with thousands demonstrating outside parliament, MPs began debating the arduous terms of a €130bn (£110bn) rescue package that the interim prime minister, Lucas Papademos, insists is the only way left to avert economic collapse. Why economic inequality leads to collapse. During the past 30 years, a growing share of the global economic pie has been taken by the world's wealthiest people. Overheard on the Goldman Sachs Elevator. The Big Lie: Wall Street has Destroyed the Wonder That Was America. [1112.3095] Evidence of market manipulation in the financial crisis. Who Really Controls the World? By Prof. The Size of the Bank Bailout: $29 Trillion - US Business News Blog. Use RICO Act to Prosecute Banks and Corrupt Politicians. G.O.P. Monetary Madness. I Said No to My Student Loan: One Borrower's Decision to Stop Paying. December 4, 2011 | Like this article? Join our email list: Stay up to date with the latest headlines via email.

Dwolla. 60 Minutes Exposes Specific Instances of Actionable High-Level Fraud at Citibank and Countrywide - It is being Actively Ignored. These are not-to-be-missed videos, produced by CBS. "26 TRILLION Dollars In Bank Bailouts! That's Not Including TARP!" Alan Grayson. Michael Hudson: Debt and Democracy – Has the Link Been Broken? By Michael Hudson, a research professor of Economics at University of Missouri, Kansas City and a research associate at the Levy Economics Institute of Bard College A longer version of this article in German was published in the Frankfurter Algemeine Zeitung on December 5, 2011 [the FAZ provided this anachronistic note]. A Banker Speaks, With Regret. What to do when you’ve got money in the bank and you’re worried about a dollar collapse: The Past and Future of Money.

Inspiration: The smartest investment you can make is creating a self-sufficient community or network, possibly with an alternative currency. Money. Cayman directors: 'next big scandal' for hedge funds - FT. LEAKED MEMO: Wall Street Has A Much Bigger Worry Than Obama. Charts for the “Facts of the Economic Crisis” Column. How "Move Your Money" Could Hurt Wall Street By As Much As $8 TRILLION. Bernard Lietaer: Money diversity. Why isn't the economy more like hydraulics? The Euro Is Doomed: How the Collapse of Italy and Greece Will Destroy the Currency.

TURNING THE TABLES ON WALL STREET: NORTH DAKOTA SHOWS CASH-STARVED STATES HOW THEY CAN CREATE THEIR OWN CREDIT. Now Is the Time for an Economic Bill of Rights. Ten Million Families Sliding Toward Foreclosure. Finally, a Judge Stands up to Wall Street.