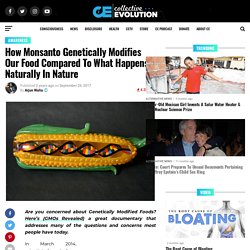 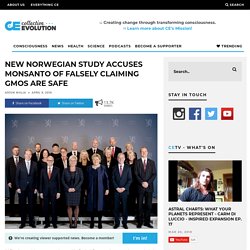 Become a member! **Check out this recent podcast with Rachel Parent who recently attended the annual Monsanto shareholders meeting. International findings on the safety of Genetically Modified Organisms are rarely reported on in Western mainstream media. Despite fierce resistance to GMOs in other countries, North Americans are just now starting to learn that GMOs are unsafe for human consumption, and that they pose significant environmental risks, too. This is precisely why dozens upon dozens of countries around the world have completely banned GMOs from being imported or grown in their country. The Norwegian government, via The Norwegian Biotechnology Advisory Board (NBAB), is one such group. Monsanto is scrambling to bury this breaking story - don't let this go unshared! - Nexus Newsfeed. I am frankly shocked this information is not making front page news right now. 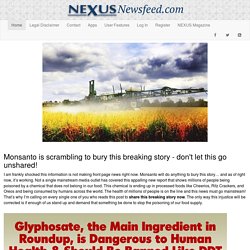 Monsanto will do anything to bury this story… and as of right now, it’s working. Not a single mainstream media outlet has covered this appalling new report that shows millions of people being poisoned by a chemical that does not belong in our food. This chemical is ending up in processed foods like Cheerios, Ritz Crackers, and Oreos and being consumed by humans across the world. The health of millions of people is on the line and this news must go mainstream! That’s why I’m calling on every single one of you who reads this post to share this breaking story now. Monsanto Buys Up Heirloom Seed Suppliers. The NM Tree and Garden Center located in Rio Rancho, New Mexico has discovered that Monsanto is buying heirloom seed companies. 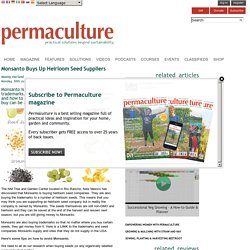 Watch This Researcher Destroy Neil deGrasse Tyson’s GMO Argument in Less Than Two Minutes. Neil deGrasse Tyson became one of the most popular figures in recent American scientific history in large part because of the way he spoke so eloquently, and concisely, about complex topics in the realms of science and astrophysics. 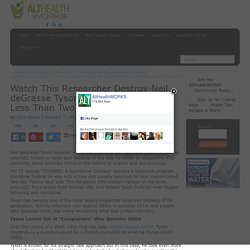 His TV special “COSMOS: A Spacetime Odyssey’ became a landmark program, somehow finding its way into a time slot usually reserved for less sophisticated fare like ‘Family Guy’ and ‘The Simpsons (the modern version of the show, anyway),’ Fox’s prime time Sunday slot, and helped Tyson build an even bigger following and reputation. Biotech Goes Wild. A few miles outside Sacramento, several large greenhouses sit behind a fence. 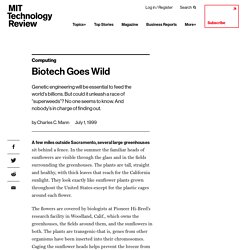 In the summer the familiar heads of sunflowers are visible through the glass and in the fields surrounding the greenhouses. The plants are tall, straight and healthy, with thick leaves that reach for the California sunlight. They look exactly like sunflower plants grown throughout the United States-except for the plastic cages around each flower. Kanada nedsmittat av GMO. New Norwegian Study Accuses Monsanto Of Falsely Claiming GMOs Are Safe. Why Genetically Engineered Trees Harm The Planet & How We Can Stop Them. Genetic engineering involves high-tech methods to integrate genes straight into an organism. 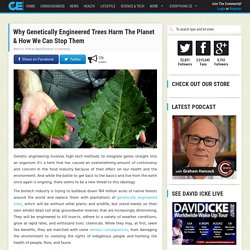 It’s a term that has caused an overwhelming amount of controversy and concern in the food industry because of their effect on our health and the environment. Monsanto is Suing California for Telling People the Truth About Its Chemicals. Claire BernishMarch 3, 2016 (ANTIMEDIA) California — Monsanto is suing the State of California for its intent to include glyphosate — the main ingredient in its wildly popular herbicide, Roundup — on its Proposition 65 toxic chemicals list. 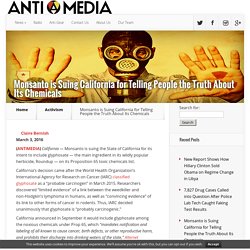 California’s decision came after the World Health Organization’s International Agency for Research on Cancer (IARC) classified glyphosate as a “probable carcinogen” in March 2015. Researchers discovered “limited evidence” of a link between the weedkiller and non-Hodgkin’s lymphoma in humans, as well as “convincing evidence” of its link to other forms of cancer in rodents. Thus, IARC decided unanimously that glyphosate is “probably carcinogenic.” California announced in September it would include glyphosate among the noxious chemicals under Prop 65, which “mandates notification and labeling of all known to cause cancer, birth defects, or other reproductive harm, and prohibits their discharge into drinking waters of the state,” Alternet summarized.

Doctors Name Monsanto’s Larvicide As Cause of Brazilian Microcephaly Outbreak. A report from the Argentine doctors’ organisation, Physicians in the Crop-Sprayed Towns, challenges the theory that the Zika virus epidemic in Brazil is the cause of the increase in the birth defect microcephaly among newborns. 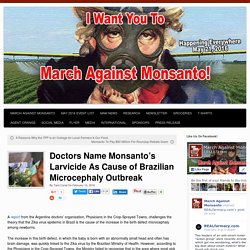 The increase in this birth defect, in which the baby is born with an abnormally small head and often has brain damage, was quickly linked to the Zika virus by the Brazilian Ministry of Health. However, according to the Physicians in the Crop-Sprayed Towns, the Ministry failed to recognise that in the area where most sick people live, a chemical larvicide that produces malformations in mosquitoes was introduced into the drinking water supply in 2014. Monsanto’s Bt-Toxins Found to Kill Human Embryo Cells. Maternal and fetal exposure to pesticides associated to genetically modified foods in Eastern Townships of Quebec, Canada. A Department of Obstetrics and Gynecology, University of Sherbrooke Hospital Centre, Sherbrooke, Quebec, Canadab Clinical Research Centre of Sherbrooke University Hospital Centre, Sherbrooke, Quebec, Canadac Faculty of Medicine and Health Sciences, University of Sherbrooke, Sherbrooke, Quebec, Canada Received 29 June 2010, Revised 26 January 2011, Accepted 13 February 2011, Available online 18 February 2011. 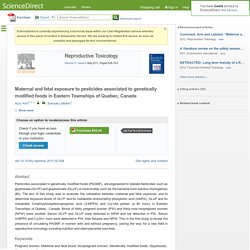 Help Vermont stand up to Monsanto. The world's most hated corporation got even more evil. Monsanto and its allies in the Grocery Manufacturers Association have announced they're suing the tiny, rural U.S. state of Vermont to stop a new law that simply requires genetically engineered foods to be labeled. In fact, the mere threat of a multi-million dollar lawsuit nearly caused the state to back off the labeling law altogether. Top 9 Facts Everybody Should Know About Monsanto. What Hillary Said 40 Seconds Into This Video Should Put Anyone Who Cares About Organic on Notice.

Thanks to the tireless work of millions of activists, journalists and movements like the worldwide March Against Monsanto, the term “GMO” has become a word imbued with all sorts of negative connotations, one synonymous with the deception, health, and environmental risks of this dangerously under-tested technology. But Monsanto and the Biotech industry in general are working to undo their years of hard work by “rebranding” GMOs, genetically modified food, and other industry terms that have become the target of activists everywhere.

University Study in Iowa Finds that Non-GMO Crop System Boosts Yields, Improves Soil Quality With Far Less Herbicides and Fertilizers. According to a recent study conducted by an Iowa State University agronomist, diverse non-genetically modified crop rotation systems can provide a variety of benefits to farmers and perform better than their genetically modified (or GMO for genetically modified organism) crop system counterparts. Diversified, non-GMO systems were found to have the highest yields by researchers in this Iowa experiment. Photo: The Leopold Center/David N. Sundberg Research for the study began in 2002 according to this article and was conducted by Matt Liebman, an ISU agronomy professor, using a 22-acre field on ISU’s Marsden Farm for experimental purposes. GMO, Non-GMO Corn & Soybeans Compared in Study.

GMO whistleblower Dr. Thierry Vrain unveils insane insider information on engineered food. By Thierry Vrain I retired 10 years ago after a long career as a research scientist for Agriculture Canada. When I was on the payroll, I was the designated scientist of my institute to address public groups and reassure them that genetically engineered crops and foods were safe. There is, however, a growing body of scientific research - done mostly in Europe, Russia, and other countries - showing that diets containing engineered corn or soya cause serious health problems in laboratory mice and rats.

Are you consuming the 9 most genetically modified foods? By: Amanda Froelich, True Activist. You care about your health, and you’re also vigilant of the fact that foods that have been genetically modified have been shown to cause allergies, organ failure, and general toxicity. Therefore it should be essential such scary franken-foods are avoided. To not only better your own health but prevent mineral-loss in soil from conventional growing methods, take care to buy the following foods organic, or avoid them altogether. 1.

Study Determines At Least 18 Million Americans Affected By This Disorder Because of GMOs. Genetically Modified Foods are making more noise, this time it’s because GM foods like soy and corn might be responsible for a wide variety of gluten-related disorders. Obama Signs Monsanto Protection Act. GM food toxins found in the blood of 93% of unborn babies. Multiple Toxins From GMOs Detected In Maternal and Fetal Blood: What Does This Mean For Your Baby? Voracious Worm Evolves to Eat Biotech Corn Engineered to Kill It - Wired Science. Corn rootworm on the roots of a corn plant. Comprehensive List Of GMO Products and Companies. Baby Food ~ Genetically Engineered Ingredients.

Jon Stewart VS. Monsanto: Hilarious Takedown. Why 80% of People Worldwide Will Soon Stop Eating Wheat. The future of wheat is certain, and it's toxic. There are as many health risks associated with the consumption of wheat as there are nutritional benefits claimed by the wheat industry. GMO-mais godkjent i EU tross massiv motstand. Bekämpningsmedelsrester i barns urin ger nya kostråd i Danmark.